The tribute below is reprinted with permission from The Independent, Obituaries, 23rd December 2004 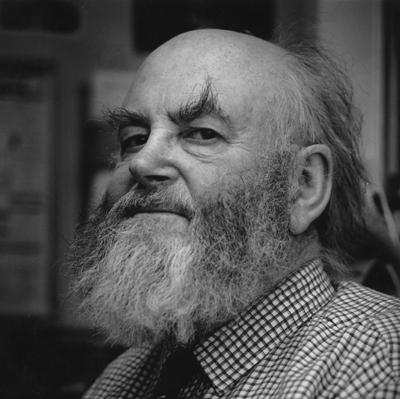 John Rose was the founder, and for 40 years the proprietor, editor-in-chief and driving force of Oxford's much-loved information service Daily Information. Its brightly coloured sheets appeared uninterruptedly on the city's walls, windows and noticeboards throughout this time, offering listings, advertisements, reviews, cartoons and, above all, an editorial stance reflecting the old-fashioned generosity of Rose himself.

Born in Tunbridge Wells in 1925, he was educated at St Edward's School in Oxford, whence he moved directly to the Indian Army in 1942. He emerged in 1948 as a Captain of Artillery, armed with a healthy distrust of the command structure, on the receiving end of which he felt he had spent more than sufficient time. From his army training in Edinburgh he recalled with great satisfaction both a top mark in "Fuels and Explosives" and coming 83rd out of 83 in Mathematics.

He returned to Oxford in 1948 to read Medicine at Pembroke College and was based in Oxford for the rest of his life. While at university he ran the Society for Cultural Relations with the USSR, and was questioned by the War Office after a party of the society's members enjoyed a visit to the Russian Embassy. Nothing untoward was found to have occurred, but a possible career with MI5, for which he had been sounded out, was quietly shelved.

Leaving university, he worked for 10 years at a wide variety of jobs, including taxi driver, mail sorter, coffee-bar assistant and ward orderly at the Cowley Road Hospital. He also travelled widely, selling cobalt pellets (to increase milk yield) to cattle farmers in Pakistan, Scandinavia and Kenya. As New Product Manager at Aspro-Nicholas, he was responsible for the rejection of Uhu glue, along with the entire range of Badedas bath products.

It was in 1964 that John Rose founded the publication for which he was to become well known. Daily Information, born out of his frustration at having to wait a day to place an advert in the existing media, always expressed his twin obsessions with immediacy and technological advancement. Typical was his establishment of Oxford's first drop-in computer centre in 1980, at a time when computers cost £20,000 odd apiece, and more or less had to be started by hand. This was followed by the opening of the city's first internet café, well before most people had heard of such a thing.

Starting life as a small plain piece of paper, typeset by hand, with perhaps a total of 20 listings, Daily Info, as it is also known, has grown to become an Oxford institution, with its website, www.dailyinfo.co.uk, visited by over 6,000 people a day, and much of the local population depending on its freely distributed maps and distinctive year-planners.

In the early Nineties, approaching his own 70th year, he added politics to his remit, standing each year since as the sole representative of his Local Government Reform Party, on a platform of council accountability. He gathered a few more votes each year, prompting the boast that another 40 years of the same rate of increase would see him in power. While professing despair at much around him (he would usher many visitors into the inner circle of the exempt with the earnest enquiry: "Aren't other people awful?"), he retained an innocent faith in human nature, certain that reluctance on anyone's part to accept his views could only be a result of his own failure to make them fully clear.

As an employer, he was highly demanding and extremely generous, often in the same sentence. Staff were treated to all meals on duty, use of vehicles, even driving lessons to enable same, and numerous outings, notably Christmas visits to the Players' Theatre in London, of which he was a keen supporter.

Amid the chaos of daily publication, it was typical of John Rose that staff were permitted, and encouraged, to spend hours on projects which would produce no reward beyond public appreciation. A garden party in 2002 was attended by more than 100 former employees, all recalling their past ordeals with fondness.

Staff, friends and family will find it hard to avoid an image of him hobbling into the afterlife with a determined gleam in his eye and bellowing, "This is exactly what we wanted to avoid! Get me the managing director's secretary!" and proceeding to champion a wide-ranging, idealistic and agreeably impractical programme of celestial reform.