A vibrant pub and eatery.

The Bicycle Shed serve brunch, lunch and dinner, fine wines, liquors and cocktails as well as craft beer, bar snacks and artisan coffee. This eatery is bringing a new bit of fun to the neighbourhood! 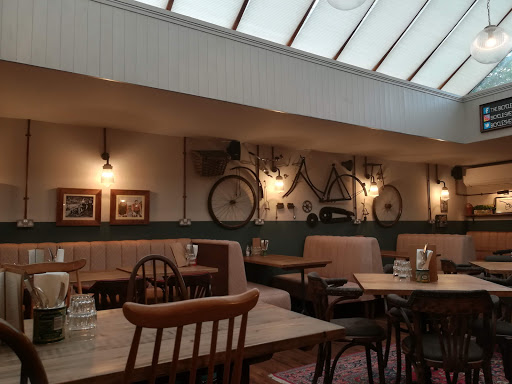 We trekked through a very rainy Sunday morning to the warm haven of the newly-opened Bicycle Shed, a bit worse for wear after a heavy Saturday night. I was a bit disappointed to discover that brunch isn't yet on offer, as the website had promised the stodgy, fried glory I was craving - but the venue is still very new and ironing out cracks as they establish themselves. What we got instead was an inspiring culinary experience that was, on balance, a lot more worthwhile than poached eggs.

We were greeted by an enthusiastic waitress, who clearly had a very thorough knowledge of the menu. For example, she explained in detail why the B12 burger is so called (it's made of chestnut mushrooms which are rich in the vitamin B12) - more on this later!

Starters arrived very quickly (but not too quickly): they were both very pretty and colourful if slightly on the small side. The goats cheese croquettes with artichoke hearts and kale pesto were pleasingly complex: a harmony of distinct elements. Unfortunately, however, my sweet potato and basil falafels were somewhat bland: all the flavour came from the accompanying salsa and guacamole, and I couldn't taste the basil at all. But the whole ensemble worked well enough and you could tell that all the ingredients were fresh. In contrast with the starters, the mains were gratifyingly enormous - I worried about not finishing! Yet for all that substance they didn't lack style either. My mushroom risotto tasted beautiful, with delightfully al dente pearl barley, a fabulous range of mushrooms and a healthy amount of garlic. It was accompanied by perfectly done broccoli and juicy, tender chicken. It has, thankfully, become standard practice to use fresh, locally sourced ingredients, but to do them justice like this takes commendable effort.

My partner's burger was impressively clever: the most convincing meat substitute I've ever experienced. The texture was just right: it had the firmness that vegetarian options so often fall short of. The flavour didn't quite match up - it could have done with a bit more seasoning - but if this is the future of ethical food consumption then even the most avowed carnivores can get on board. It's always reassuring to see genuine care and thoughtfulness go into vegetarian and vegan catering, so that the dishes feel like they fully belong on the menu, rather than being begrudgingly added on. From our experience the team behind the restaurant evidently care about food, and their passionate innovation more than makes up for any shortcomings, such that their excitement is contagious. There was a buzzing atmosphere, vibrantly reflective of the energy of a new venue bursting onto the scene. I was initially a little cynical about the deliberate quirkiness of the scattered bike memorabilia but there were a few touches that made me fall in love with the place, such as the ingenious candle holders made from gears. Amusing cartoons and illustrations complement the bike parts and associated accessories: the overall effect is cosy and friendly, perfect as a hideaway on a rainy day. Although as it was so bustling I didn't get the sense that one could drop in for a casual pint, it definitely felt more like a restaurant than a cafe or pub - still, the place is a great addition to Summertown’s culinary scene overall. If these early stages are anything to go by they will quickly become a well loved institution, well worth a venture out of the city.

The meal was brilliant value: we both had starters, mains and a soft drink (sensibly avoiding a hair of the dog, though the cocktails did sound great) and the total was a surprisingly reasonable £44.95. I am planning to visit again soon, to explore the rest of the exciting menu.