The Eagle and Child

One of Oxford's infamous drinking holes.

This long, narrow pub is where Tolkien, C.S Lewis and other Inklings used to drink for 30 years or so. You will occasionally hear it referred to as the Bird and Baby. There has been a pub on this site since 1650. Small conservatory at rear is available for private functions (though avoid the undersides of the tables, or you will discover what 360 years of sticky beer residue does to your trousers). 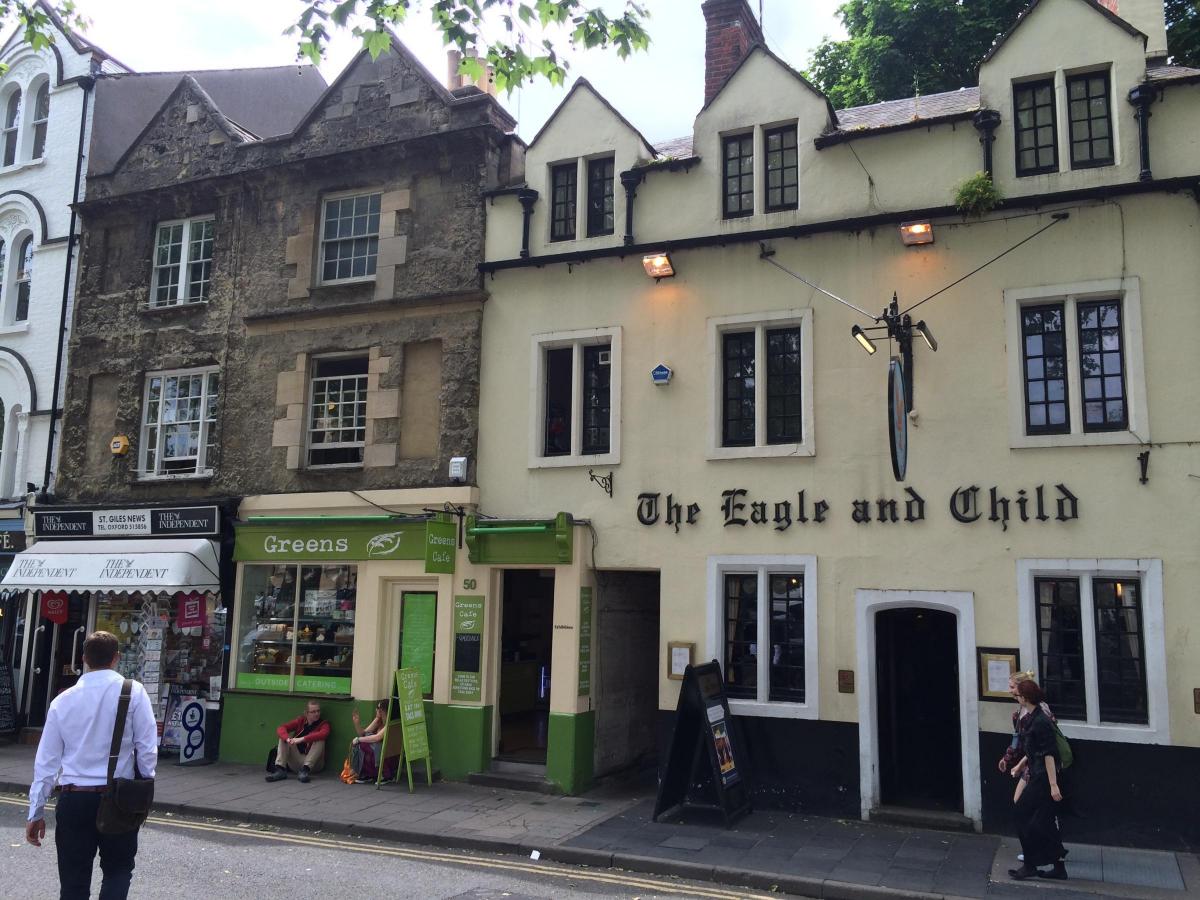 Susie Cogan June 7, 2006
A nice cosy never-ending skittle alley of a pub which has never quite got over its association with the tiresome Inklings, the Eagle and Child has a frankly superior quiz (Tuesdays, 8.30pm, free) with a few nice touches to liven up an otherwise simple format: 25 questions, each beginning with a different letter of the alphabet (except x), 5 of them connected by a ‘mystery link’ for a bonus point. The quiz’s popularity does mean that you need to reach a pretty high standard to have a shot at the prizes (£25 bar tab for first place, £5 tab for second), and from a couple of visits (neither yielding any glory for yours truly) I suspect that there are one or two dominant teams who carry off the laurels every time. Definitely worth a look for serious quizzers able to still their trembling lips in the face of defeat.

Ate here in December. Best service we've encountered. Young staff, knowledgeable, personable and efficient. Beer was good; wine was ok. Food: chips were great, everything else not that great. Pricing was a bit high, but it is the "bird and the baby" after all.

Tom 28 May 2014
Was served an awful meal in here last night. Chips and side salad were ok but the steak was not tender or juicy, just a slab of dry meat. Beer, Old Hooky, was not in the best condition either.
15 Nov 2010
I know this is semi-blasphemous but the front part of the pub, with the ‘snugs’ by the front door, needs a blinking good sprucing up – it’s not olde worlde, it’s not traditional English, it’s just tatty. No need to do anything major (gawd forbid actually) but how about a really good clean and a fresh lick of paint. The pub earns a mint so it’s a tad naff to stinge on the appearance.

Pies are also hit and miss. Really attractive looking menu. Novelty to see a list of pies but beware availability and quality.

Lovely pub, needs some care…
Ben 24 Jun 2010
I had the nastiest meal I have ever had in Oxford here last week- a 'mushroom' pie (almost completely empty of mushrooms) with a squidge of cold mashed potato. The meagre portion of fresh veg on the side had at least been prepared on the day. Quite dismal, not cheap and no other vegetarian choices.
spududontlike 25 Jan 2010
I spent the month of July in Oxford in a "study abroad" program, and the Eagle and Child became my favorite place to frequent. I loved the ambience, and the service could not have been better! I loved watching friends meet, and others who'd heard of the pub's history walking in and looking in awe of the place. My favorite was the Brothers' Strawberry and Pear Cider - too bad they don't sell it in the states :~( ! I also fell in love with the apple-rhubarb crumble. I'd save my daily calories just to have one of those in the evening!! What a treat!! Of all my memories, this place was by far my favorite, and I hope to return one day soon!!
Debann 12 Nov 2008
The Eagle and Child really is a good standard pub (it's accreditation in the Good Pub Guide is testament to this), with a warm layout and friendly staff. Surprisingly (given the listing), I feel the selection of bitters can be limited (been there a few times to only see 2 bitters left on tap), the pub has really turned a corner with it's food over the last year or so. Unlike previous posts, I have to say that the food is VERY reasonably priced (and let's hope it stays this way as the large numbers of diners would suggest people are twigging on to this) and with a very nice pub grub menu. The pies (esp. chicken and leek) are very hearty, as are Fish and Chips, with generous portions and efficient service. I have taken several people to eat here and many are now also regular customers for some of the best pub food in Oxford city centre. Definitely saves a trip to Jericho or the outskirts of Oxford! Please keep up the good work.
heronweaver 13 Oct 2008
Good old-fashioned boozer with plenty of history but indifferent food. I know the food is really a side-line and is not meant to be amazing but my Steak Sandwich was burnt and was served as a very meagre portion with about 10 chips. My friends had ploughmans which did look better and the pork pie was of very good quality with real chunky pork (less processed than supermarket fodder) and half-decent pastry.
I like the nooks and crannies near the front for some cosy evening drinks and the bar does offer some good bitter and cider options. Found the absence of any music in the rear seating area to be in one turn refreshing and yet strangely unsettling (like they'd called time at the bar!).
Joe B 7 Jun 2008
For pretty much two terms I have been visiting the Eagle and Child at least once a week. The layout is cosy, the staff are always friendly and polite, whilst the food is reasonably priced for some of the best pub food I've tried. In particular, I would recommend the Sausages & Mash or the Steak & Ale pie. Portions are plentiful, and you will leave feeling satisfied. The desserts are pretty good as well. The perfect place for a lazy lunch and to catch up with friends.
Oxford Student 31 Mar 2007
I've been a big Eagle and Child fan ever since I moved to Oxford, but I had a terrible experience last week. I ordered some food, had a few bites, and realized it was completely uncooked. A few of my friends tasted just to confirm that I wasn't crazy, then I spoke to the waitress and asked her to replace it. It was probably 1/3rd eaten. She came back after a few minutes and said that they couldn't replace it because it was from a pre-made packet. That was surprising enough, but I said all right, could I please have another dish, in case I had gotten a bad one. She nodded and walked away. After that, my friends waited about an hour. Finally I went up and talked to the bartender. He told me that I wasn't getting any more food because it was 1/3rd eaten. I was pretty angry and asked to talk to the manager -- turned out he was the manager. What made me angriest of all was that nobody had told us that the food wasn't coming. We waited for an hour longer than we wanted to because of their basic incivility. There are now about five of us who will never go to the Eagle and Child again.
Henry 28 Jul 2006
My favourite pub of Oxford as yet. The food is excellent, mouthwateringly good and always piping hot - especially the fries which are always freshly cooked and burning hot even! The prices are quite alright, Fish and Chips for around 5.25 for a reasonably big portion. The desserts are to die for, especially the chocolate puddle sponge pudding which was slathered in chocolate sauce of two shades (dark chocolate and milk chocolate presumably), with white chocolate oozing out from the inside. I liked the beers on tap as well (Brakspear Bitter, Adnans Broadside, Fullers London Pride, and even belgian beer Hoegarden Wit). Very friendly staff, and pub quizzes every Tuesday at 8.30 pm (as mentioned by previous poster). Love the food, love the desserts, love the ales, love the staff - they even have a non-smoking section which does screen off the cigarette smoke considerably. I have yet to find anything to dislike about the pub (besides its smallish size, which can't really be helped since it's that old).
YY 13 Jun 2006
Review this venue