We’re all about fresh, furiously flavoursome authentic Japanese street food and sushi. Although sushi’s at the heart of what we do, we have a spectacular range of street food, from traditional classics to innovative fusion dishes designed by our Executive Chef and his team. 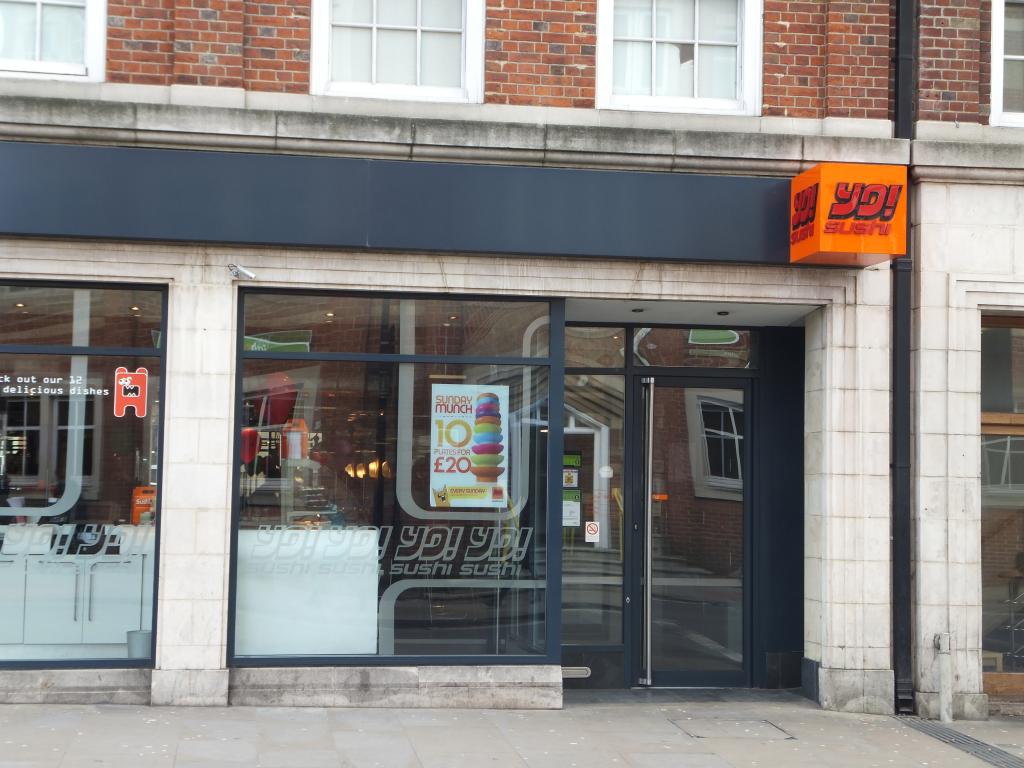 I was delighted with Yo! Sushi. Go on a Monday night and there is a wide range of dishes costing £2.20 each, including hamachi, seabass, duck hand rolls, masago gunkan and spicy squid along with free miso refills. Be prepared for a bit of a wait on a Monday night but no more than you'd find outside elsewhere. Only downsides: I thought the wasabi probably wasn't real and the unagi tasted still half-frozen.
Ratz 9 Nov 2010
Yo Sushi seems to have a new manager. When I visited last week the belt was full of fresh looking and delicious tasting food. It is on the expensive side but good for a treat. Blue Mondays are especially good as all dishes are £2.20.
Laviena 11 May 2010
Bland and tired looking food, and rather expensive- there is nothing wrong with the conveyor belt concept since this is very common in Japan as well for cheap-ish lunch places, but what's the point if not even a fraction of the promised menu makes it onto the belt?

I guess the unsuspecting students who were crowding the restaurant didn't notice, but AVOID at all costs, this place is an insult to proper Japanese Sushi.

Frank 7 Feb 2010
Decided to give it a try as recently they offered 40% off the bill discount. Even with the discount the food was on the expensive side in terms of what you get. The sashimi was mediocre at best, and the chicken katsu was dry.

In all, stay away from this if you are a sushi lover or if you're looking for a satifying meal, because you are sure to leave with a much lighter wallet without satisfying your palate!
paperbacks 2 Feb 2010
Just as I expected sadly. Mediocre at best. I could not but help feeling like a tired airplane passenger waiting forlornly for my luggage to appear on the Airport Carousels . The same tired old bags going past again and again and again...

I love Sushi (and Sashimi), but I felt I ought to give "Yo Sushi" a go despite my deep misgivings about a restaurant where food revolves on a conveyor belt. The Sushi was of poor quality (some Sushi chefs take 7 years to achieve true greatness so no surprise there as most chefs in the restaurant appeared to have learnt it on the job), the fish rather bland and rubbery and tasting suspiciously like it had been previously frozen (a slightly watery mouth-feel), the chicken was dry.

Sushi and Sashimi is an Art and a Craft and one which deserves respect. Raw fish becomes in expert hands a dish of exquisite perfection, of subtle flavours and textures. This pale imitation of this glorious Art Form is a disgrace.

Most dishes revolving on the belt seemed to consist mostly of salmon and I could see none of the dishes I actually really wanted to try: "Coriander Tuna", "Assorted seared Sashimi", "Sesame Tuna", "Eel", "Fresh Crab , cucumber and tamiko", "Assorted Iso", "Cunchy Prawn", Soft Shell Crab" etc... We ordered two dishes from the waiter and both were unavailable ( the "Red Mullet Gyoza" and "Beef Tataki"). The "Hairy Prawns" were quite nice but that was about it.

Hardly any plates were going around, most seemed to be the same , including a rather unappetising cover-less offering which looked like a day old toasted cheese sandwich... The Miso soup (free refills) was pleasant, nothing more, and the service was rather mediocre.

All in all only good if you like gimmicks or have no idea what real Japanese food is like and how great it truly can be. "Yo Sushi" has all the appeal of a wet Sunday and I would advise any true Seafood love to stay away. We came out feeling hungry having spent £40 , but worse of all pretty disatisfied with the quality and authenticity of the food on offer.
Pamplemousse 13 May 2009
Yo Sushi, catchy idea but fast food sushi ethos. Which means, if you're an ardent devotee of sushi stay clear. They have what you'd call "chewing on rubber" feel to it. Are you an aficionado? Ingredients may be similar but the difference!

If you must go, order from the waiters/waitresses. Try to avoid the conveyor belt bowls. You'll prefer it. Oh, yes. Miso soup has free refills. Onegaishimasu!
No!Sushi 28 Dec 2008
Had dinner in Yo! Sushi last night. It seemed that some of the plates had been going around a long time, and some of the plates appeared to be rather stale. This was particularly evident when I ordered from the menu, which seemed to be a lot fresher. Overall the sushi is OK and better than the takeaway boxes you can get in many supermarkets.
Simon 11 Aug 2008
A few weeks ago, a friend and I decided to try this place out as it was less crowded than a certain "other" Japanese place in the city centre. The staff were friendly and cheerful, and we were quickly shown to free space at the Sushi Bar / Conveyor Belt. The ambience was very good. Not too crowded, and they did not pack us in tightly. The endless refill policy was very good, but alas, I didn't realise the Miso Soup was unlimited until reading FishFace's review.

Compared with other Sushi Restaurants I have been to, the food was generally on the expensive side. This can be easily rectified by adding a bit more to each plate. The quality was good, especially the chunks of raw fish. We were going to try out one of the £5 dishes, but none came round so we gave up. The menu was rather lacking (compared with similar restaurants in Hong Kong or Nagoya), with the menu obviously written for the local market. Where was the Whale Meat and Sea Urchin? Some more exotic (and controversial) animals would have been nice.

The meal for two came to ~£39 (that was with 2 beers).
I recommend this restaurant as part of a date or courting ritual.
Comrade Lesnik 2 Jul 2008
Yum! Sushi, more like! Mmm. Enter the world of space-age hi-tech dining, where tasty dishes - each encapsulated in their own plastic bubble - creep temptingly and ceaselessly towards you along the table-side conveyor belt encircling the open plan kitchen. Just grab what you want before it escapes you (don't worry, it'll come round again); the colour coded platter indicates the price of your item (see the menu), so you can keep an eye on your spend as you go along. On each table are taps for fizzy and still water; £1 per glass, but endless refills. (Help yourself to the upturned glasses on the table; they will be counted along with your coloured plates when your waiter/waitress tallies up for your bill.) The endless refill policy also applies to condiments (ginger slices, wasabi, soy), green tea and miso soup. If what you want from the menu isn't on the belt, press the button on the table to set off the flashing light that attracts a member of staff, and order it - it will be prepared and with you in minutes. Highlights include working out what the washing-machine-like device in the kitchen is (no prizes); gawping at the mushroom-shaped lanterns suspended from the silver-foil-covered ceiling; trying to determine what the occasional robot-voiced anouncements were (I still haven't); watching huge rolls of seed-covered rice being turned into little neat rolls of sushi, and trying to take in all the weird glory of the Japan/Oxford mural that you encounter en route to the loos. Oh - and the handdryers. I was only slightly disappointed that the loo itself didn't play me a tune.

The only slight disadvantages of this wondrous place are as follows. Beer is very expensive (£3.50 for a 330ml Asahi); parties of bigger than 6 can't really be accommodated as they won't fit in the belt-side booths (our party of 8, 3 of whom were children, had trouble); and your table can become very cluttered with plastic crockery debris (as it can't be cleared until you're ready to pay).

And finally: the food. I wouldn't say I'm a sushi expert, but I have eaten a fair bit of it in several different locations now (none of them Japan), and I know what I like! :) The plates on offer range from £1.70 to £5, and I didn't try a £5 plate, preferring to fit in more of the cheaper choices. The eel was delicious, but then it usually is (!); the katsu prawn and edamame went down well with the kids (as did the chocolate desserts), and the pumpkin korroke (croquettes) were a new one on me - and very tasty, though I preferred to save myself for some more eel. In all the excitement though I forgot to order any of the seaweed cone items I usually adore, so I clearly need to go back, almost immediately. To hell with the expense. Which, in the end, wasn't massive - the bill was just £15/head, and you'd be hard-pressed to eat so well anywhere else in town for less.
FishFace 29 May 2008
Review this venue