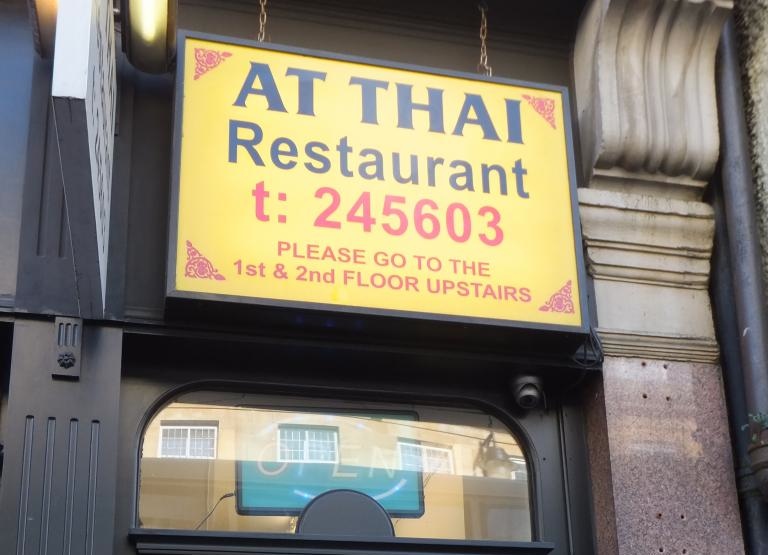 Not the worst place in the world, However service was pretty bad.

We had to ask three times where the rest of our drinks order had gone. The waiters english was passable at best, although he did repeat our order to make sure that he'd got everything down. However when our food did arrive (all at different times) there were a couple of dishes missing.

The food itself was ok, but rather bland. I get the feeling some dishes are done better than others. Portions of rice were just slightly too small. generally it was a bit too Monosodium for my liking.

I was very surprised to see the 10% tip automatically added as we didn't get a good service and we weren't exactly a huge group.

Overall I would say that it might be worth poping in if your desperate for some Thai food, although there are much better places in Oxford.

Would I go again; No - only if forced.

x 25 Feb 2012
We ordered take away last night. It was delivered promtly. Food was good. I had chicken with garlic and pepper, and coconut rice which was delicious. Hubby had green chicken curry - also a good choice. Would definately try again.
happy customer 8 Jun 2011
I ordered some home delivery from here last weekend and was massively underwhelmed considering their claim to be the 'best Thai food in town'! I waited 1 hour 40 mins for my food to arrive. When I called after an hour to find out how much longer the food would be they hung up on me. When I called again, they told me the driver was 10 minutes away. 40 minutes later my food arrived and although the Tom Kha Kai soup was nice the rest of it was pretty average - the Pud Thai Prawns was particularly disappointing and only contained 5 overcooked, rubbery butterfly prawns! All in all, I wouldn't bother again!
An Unimpressed Diner 7 Mar 2011
My wife and I ate here last night and although it was a perfectly pleasant experience, it was a mixed bag.

We had the £16.95/head set menu for two and the shared mixed starters were very nice. Mains were perfectly tasty and by time we were eating those, the placed perked up a bit (we represented half the clientele until then). From that point onwards the service went downhill – how can it be a chore for two people to keep an efficient eye on only 6 or 7 parties, none large in number?

Funny someone else mentioned plates not being cleared away – we had the same thing, long time to wait for coffees and asking twice for our bill dragged out the latter part of our meal which was a shame.

However this place is easy to summarise – if you want a ‘treat’ and the best Thai then go to Chang Mai although it’s pricey. For more reasonable prices, tasty food and a nice atmosphere I suggest the Old Tom pub whose Thai food is very good. On this basis it’s hard to see what niche AT Thai fills but if you find out this is where your friends/family want to take you for a meal then be assured there are worse places to eat in Oxford.

Litmus test – will we go back again. No – for the price and quality there are better alternatives which is a shame.

Ben 1 Apr 2010
First impressions: the place is nice, if a little rough around the edges, and staff are welcoming and friendly.

The menu is rather good, covering everything you might expect to see on a Thai menu and more. We both opted for the two-course set menu, priced according to the main component of your choice of main: £7.95 with a vegetarian main course, £8.95 for meat, and £9.95 for seafood/duck. The starter is an individual mixed platter of tempura battered vegetables, vegetable spring rolls, sesame prawn on toast and wonton. The waitress, when my friend ordered a vegetarian main course, asked if she was vegetarian, and, when she said yes, arranged for her starter to be all-vegetarian. This was the first indicator of the frankly excellent service - I've very rarely known this happen anywhere else without having to ask first. We also asked for a glass of tap water each, and far from being difficult about this as some restaurants can be, they were happy to oblige, even coming round with a jug of water and filling our glasses up in between courses without having to be asked.

The food: the starters were good, if nothing mindblowing – the meat items outdid the vegetarian ones somewhat. For main courses, I opted for the red chicken curry, which was excellent, both creamy and spicy and served with delicious jasmine rice. My friend had bean curd chilli which was also received very well.

The only criticism I could make of the otherwise faultless service was that they were a little slow in clearing away at the end. There was, however, no compulsory 10% service charge others have mentioned.

We will definitely be returning.
WTD 2 Mar 2010
I’d have to agree with Oxo – the food at AT Thai is perfectly reasonable and fairly well priced but it’s no contender for Oxford’s heavyweight Thai champion. I’ve eaten there twice for lunch in the past month, finding the lunch menu (which is priced roughly around £6.95 for most dishes) a pretty fair price for what you get. I dined alone on my first visit and sampled their Spicy Noodles which were good, thick noodles with a generous scattering of chicken through them and some hefty pieces of red chilli. The portion was an excellent size and I could only manage to eat a little over half of it! I had a Thai beer with my lunch which was expensive coming in at over £3 a bottle – beware; AT Thai’s cheap prices rise quickly when you add in drinks.

On my second visit, I had lunch with a friend and we both opted to have the two course set lunch menu which comes with a mixed starter and a main dish, rising in price from £6.95 for vegetarian dishes to £7.95 for meat dishes and £8.95 for duck and fish dishes (if my memory serves me correctly). My friend rather charmingly thought that ‘meat’ meant you would be served a random selection of meat as a main dish and was slightly disturbed by the thought of mixing duck and fish. He looked suitably embarrassed and relieved when I reassured him that he just needed to pick one main course and that the price would correlate to the main component of the dish! The mixed starter was, to be frank, pretty awful. The spring roll was by far the best item on the plate and the prawn toast was edible but oily. The rest of it, well, I left it all. Expect a poor excuse for a prawn wonton (heavy on the batter with a tiny filling of prawn) and large slices of vegetables (peppers, carrot and onion) to be thickly battered and very greasy. My companion battled through his but declined the offer to finish up mine. Rather shamefacedly, I hid nearly the entire platter under my napkin and cheerfully reassured the waitress that it was very good, thank you. My red chicken curry was delicious – the feisty chilli kick complementing the creamy coconut curry sauce perfectly with large pieces of chicken and bamboo shoots floating in it. Again, portions were large and I could finish neither my curry nor my rice! My friend went for the chicken and cashew nut stir-fry which looked nice and he polished it all off, so I must presume he enjoyed it. We had a soft drink each with our meal and the bill came to £22.10, which both of us felt was a little steep for lunch, considering what we’d been served. I wouldn’t recommend having the two courses – you won’t need it and with a drink of any kind, it increases the price quite dramatically. Service is friendly and attentive, if a little slow when it comes to bringing the bill.

Overall, a welcome addition to the High and somewhere I would certainly eat again but order wisely and ask for tap water.
Dr Mukti 6 Oct 2009
We fancied a thai meal one saturday night and went through the usual process of working out which places you might be able to get into and how much we wanted to pay. In the end we decided to try out this Thai next door to Chiang Mai. We were certainly pleasantly surprised. Having been to Thailand several times I'm usually disappointed by the blandness of most Thai restaurants. We had the Chicken Tom Yum, Spicy Noodles, Prawn Salad, Beer and Irish Coffee and it was all authentic, fully flavoured genuine Thai food (except for the Irish Coffee obviously). The decor is fine and the biggest bonus you can actually get in without pre-booking or having to wait on Saturday night.

The service was too attentive for our tastes and what we found quite annoying was that they kept trying to fill up our glasses with more beer, even after we'd asked them not to. This aside, good, cheap, genuine Thai food. Overzealous service is better than the usual experience of being ignored for aeons or the arrogant dismissive attitude we usually find elsewhere. It's about time there was decent competition to Chiang Mai. What a result for the meagre but improving Oxford restaurant scene. Maybe next we'll get a decent Japanese place?
King of Tie-land 28 Aug 2009
Decided to try AT Thai for dinner, as I'd been asking myself for months why anyone would want to open a new Thai restaurant slap-bang next to the best Thai in town. The eating experience here was defined by the friendly waiter who seemed to be wanting to do a comedy routine for us - eccentric and amusing to begin with, but getting a little bit irritating by the end of the meal.

Food was decent and value ok, but the flavours seemed muted - aimed at English palates, perhaps, rather than offering authentic spiciness. To be honest I'd opt for Chiang Mai every time, but if it was full (which is likely!) and I was hankering for Thai food, I'd give AT Thai another go.
Oxo 15 Jul 2009
A little disappointing having read the previous review. The portion was a little small, the food tasted ok but must have had high monosodium glutamate content as I woke in the night with a raging thirst. The waitresses' limited English was also a bit of a problem but we did just about get what we ordered. I was a little put out that a service charge was automatically added, bringing over 2 drinks and handing down 2 plates should not constitute 10% of the bill. I will not be rushing back, which is a shame as town could do with this sort of a restaurant.
BigGav 11 Jul 2009
Fantastic food and the service as well.
Leo 24 Jun 2009
Located next to venerable Oxford standard, established Thai eatery Chiang-mai, you'd think this unassuming upstairs venue wouldn't have a chance. But somehow, since its opening in early 2009, this casual, minimalist Thai venue has won our hearts with its extraordinarily friendly service, reasonable prices, and above all, addictive Thai food that blends spice and savour in just the right amounts to leave every diner at once satisfied with the food and craving even more.
Isabella 29 May 2009
Fantastic service and delicious food - the green curry is legendary - I almost prefer this minimalist, inexpensive place to the next door Chiang Mai.
Tara 17 May 2009
Delightful service. The pad thai was wonderful - better than the incumbents for the same price (or even slightly cheaper). Generous portions a real welcome. Only one drawback: interior could do with some redecorating but a gem otherwise.
Sawasdee 12 May 2009
Review this venue