Indigo hosts a wide range of men's & women's clothing, baby wear and accessories, as well as gifts, homeware and jewellery. Brands include People Tree, Braintree, Komodo, Privatsachen, EKO, One Life, Nkuku, and Made. 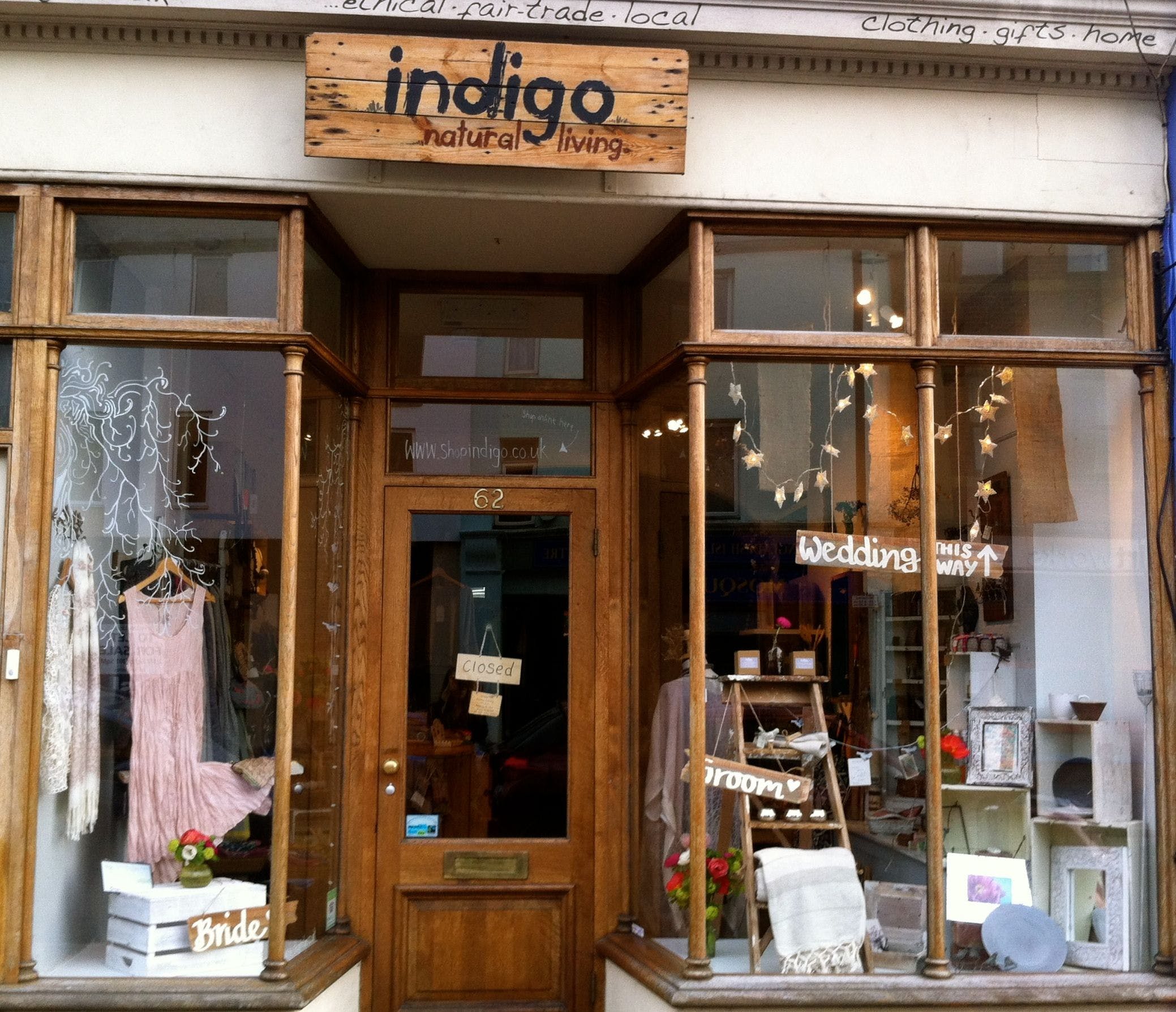 Jen Pawsey October 22, 2009
Here is a review of Indigo, under its previous name 'Saree'.
"This is a really dangerous shop!" say Saree's customers. And I can see why. For a start everything in it is tempting - it's all carefully chosen to be an eclectic and beautiful treasure trove, with something to appeal to everyone. For another thing it's easy to stay awhile. There's no blaring music or neon lights, just a cosy and welcoming peacefulness, a break from the bustle of Cowley Rd. Saree smells nice, it looks nice, it feels nice.

The range includes clothing for men, women, babies and children; shoes, jewellery, furnishings, toys, soaps, hats, mirrors and many other sparkly things. The furthest room is a Bamboo Jungle, with displays mounted on a forest of giant bamboo stalks. The displays in the front part of the shop use cupboards in the walls which almost feel secret. Every find is an exciting discovery. It feels like the home of a very tasteful friend!

For co-founder Sarah Wearden the Saree shop is part of a very personal journey. She's always been interested in people, with a background in Anthropology and working for Oxfam. On a journey to India she saw the rich colours and sense of community as the women went to work in the fields, and she wanted to bring a bit of that to England. The Saree clothing label was born. She sold through markets and festivals, and then almost a year ago opened the shop.

It was not an easy time to start a new business! But Sarah feels it had its good side too. "You look for a new way to do business that works better." And despite the notorious Cowley Road rents she felt the place was the natural home of a Natural Living shop: it's still a community of nice independent shops, and an alternative to the chain-laden High St.

And it's not just the location which was carefully chosen. Sarah and her partner Josh Knight have thought long and hard about the ethos, the products they sell and who they support. Even the list of countries is a traveller's dream - India, China, South America, the Philippines, Australia, Brazil via the Netherlands, and of course the UK. In fact some goods come from Oxford. Sarah hasn't personally visited all these peoples, but the supply chain is short - so she will always know someone who has.

The people who benefit are similarly diverse: single mothers in Peru, refugees in India, turtles who are in danger from plastic waste in the sea, Nepalese children stolen for Indian circuses and street children in Brazil. Ethical trading is particularly good for women's co-ops in parts of the world where women don't usually run businesses. I asked Sarah how she managed not to become drained by all the suffering in the world. "I try to allow myself to be touched but not overwhelmed. These are the positive stories grown out of the awful situations. We give information about the charities, and we don't say 'Buy this and change the world!', but it's about choice, choosing to empower rather than enslave".

Saree doesn't moralise. It's not a shop which wears its message on its sleeve, just on its inside label. Sarah's right - shopping won't save the planet, but by making the right choices you can be part of a good thing. It can be so easy to be outfaced by the dilemma of ethical choices, and stand bewildered in the supermarket trying to choose between Organic, Fairtrade, local, British, low airmiles, small family producers. The truth is that there isn't one solution, but lots of people are trying to find answers. So for the cotton industry, Fairtrade is a big step forward. For shoes there doesn't seem to be a Fairtrade model yet, but an Ethical stamp means that the workers in the factories are treated better while the environment isn't being damaged with dyes.

As shops like Saree prove there is a market for these things the range gets bigger. Menswear, children's clothing and vegan shoes are seeing a big increase. More designers are becoming interested in the ethics behind the textiles, and so the look of fairtrade and ethical clothes is becoming much more diverse. Monkey Genes are now making jeans in Derbyshire, from UK Soil Association organic cotton. They're just jeans, but better. As Sarah says, "Clothes made with love feel different".

In the end, though, it's the beautiful products which sell themselves. With Christmas already hovering just over the horizon Saree's a good place to get to know. And you'll probably find something for your own Christmas list with while you're shopping for someone else!