Exactly what it says on the tin! Lots of facts and figures for Oxford United fans by Martin Brodetsky. 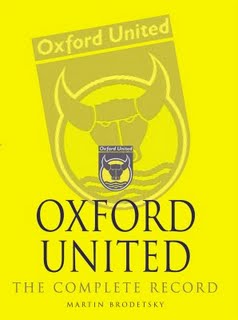 Peter Tickler September 1, 2009
To call your book The Complete Record isn’t exactly underselling your product, but in the case of Martin Brodetsky’s new book on Oxford United, it is as near as damn it true, and no true fan should feel complete without it. It traces the history of the club from its beginnings as the village club of Headington through its rise through non-leagues, then to three seasons in the First Division and the capture of the Milk Cup, and then the long slide down to the non-league again.

It also contains sections on Top Players, Matches to Remember, Managers, season by season complete lists of games played since the 1949-50 season, sample programmes from each season (a nice feature), and detailed player records.

I am embarrassed to say I cannot remember the first time I went up to the Manor Ground, but it was in the 1972-3 season, and the forward line very likely consisted of the three Cs – Clarke, Cassidy, and Curran. I do remember watching various games from my undergraduate phase – games that stick in the mind include a 1-1 draw against Bobby Charlton’s Preston (we should have beaten them!), a crushing 0-3 defeat by Millwall with the young Hill outstanding for them, and the 1-0 defeat of Manchester United in the league. The great thing about this book is that you can go and check your memories. It is hard to find fault with such a labour of love, though my own memory tells me that Derek Clarke’s winning goal against Manchester United (8 February 1985, crowd 15,815, Burton in goal and Shuker at no. 3 – I won’t list the rest, but I could now!) was struck from less than 30 yards out (p. 159), but I was standing behind the goal in the London Road end, so who knows. It all went mad pretty quickly!

The managers’ section is completed by Chris Wilder, which underlines the up-to-date nature of the book. However, I expect Martin, like myself, very much hopes there'll be a lot more to add to his entry by the end of the season. Mind you, I write this only hours after watching the 0-0 draw at home against Forest Green Rovers, so – like all wise United fans with a bit if history behind them – I take nothing for granted!

Come on you yellows!

PS My crime novel Blood on the Cowley Road contains matches that are not in Martin’s book. Don’t blame him – they are the result of my own artistic licence!