The history of Daily Info, from 1964 to present.

Daily Information was founded and run for 40 years by John Rose. You can read why, in his words, below. Or for Emma Pearson's charming round-up of the first 50 years of Daily Info see here.

Here is a picture of the first printed sheet (A4), from 28th September 1964. If you're feeling nostalgic or historical you can browse through our archive of printed sheets here. We aren't sure whether we are delighted or horrified to discover there was a mistake in only the second ever edition, where the date has mysteriously remained 28th September. It would be a very easy copy&paste error, but before the days of copying and pasting, so we were clearly ahead of our time even then!

But first, one of our longest-standing customers remembers some of the gadgets in the early days of Daily Info:

"Long ago in the days before fax, computers, the internet, and e-mail there were things called word processors, letters and telex. Word processors were huge and also hugely expensive. They used disks the size of plates and DI was open 24 hours a day. You had four machines made by Phillips with names I can only remember Jim and Cyclops (Jim and I had a special thing going but my relationship with Cyclops was so so).

"In those days all the schools in Oxford had the same telex address as telex machines were enormous as well. It was something like 83147 via OR Attn Lake for e.g. (OR = Oxford Relay who had an office in Howard Street I think off the Cowley Road). It was run by a South African guy called Gideon. When they received a telex message they would telephone, read it out, and then send it out by post (which, you will be amazed to hear, always arrived the next day."

The Possible Origins of Daily Information

John Rose, founder editor of Daily Information, was persuaded to reveal some of its secrets for NOA News. Can we really believe that it had an independent existence before becoming an indispensable feature of the Oxford scene? Imagining Oxford without Daily Info is like imagining it without Magdalen Bridge... 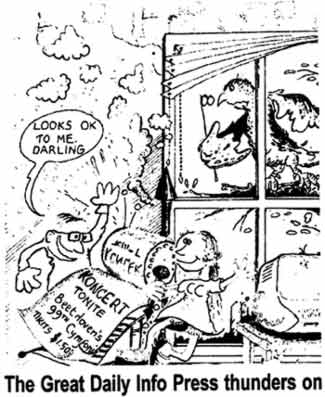 The large brightly coloured ‘Dailyinfo’ sheets have been appearing on College noticeboards and around the town forever, it seems. Where they come from is a bit of a mystery. They say it is produced somewhere on the far bank of the Cherwell – that’s why you can’t find it – it's always on the far bank. We have managed to get a sketch of the works, though (see right).

The origin is also obscure but the ‘Ides of March’ editions are usually partly written in Latin. There is a picture of a copy on the walls of the Senate building in Rome at the time of Julius Caesar. And if he had paid attention to the Personals section, the Empire might well have survived.

There are currently no further clues from the ‘Dark Ages’ or Medieval times. The origin of its present reincarnation depends on whether you prefer the Schikelgruber or Kharakvasla versions. You are going to get the Kharakvasla version.

At the end of the war (the WW2 one), I was stationed at Lake Kharakvasla in Bombay Presidency. A signal came from GHQ, Delhi. ‘War’s over. Swords into ploughshares. Educate the troops’. The Colonel, who came from a minor public school keen on rugger, wasn’t very keen on education. ‘What do they need it for? Only get above themselves. However, it's an order’. He turned to the Major. ‘Major!’ ‘Sir!’ ‘Fix it.’ ‘Sir!’ The Major turned to the Captain and the Captain turned to me. ‘Rose’ he barked (first names weren’t used much then). ‘Get the men educated.’ I turned round and, being the most junior chap, found no one else there.

We turned over all the transport to driving instruction and set about improving the sepoys’ writing and reading in the Army language, Romanised Urdu. It was a mixed unit of Hindus, Muslims, Christians and Sikhs. The Adjutant was a Sikh and half the officers were British.

Our attempt to interest the female camp followers, even with chaperones, was not a success – they hid behind the tent flaps and wouldn’t come out. Had to be particularly careful with women in India at the time – they usually seemed to belong to somebody who would be frightfully cross if he thought you were getting too close.

The Great White Queen from over the sea had gone – some 40 years previously - but the news took time to spread in those days. I thought we would bring them up to date. On each noticeboard, we had a Dailyinfo sheet about the outside world, to which contributions were invited. Called it Ajki Khabar (‘Today’s news’). I remember an article about a birthday party – chocolate cake and organdie frocks – in Kensington palace. Either Margaret’s or Elizabeth’s – not sure which. Don’t know what the sepoys made of it.

The need for an easy, immediate form of communication was also apparent in the Oxford of the early sixties. I tried to put an ad in the Oxford Mail. You couldn’t put it in by phone, so I went down to their office in New Inn Hall St on Thursday afternoon. It was shut along with most other shops in Oxford – early closing day. Incidentally, the last weekday buses went about 10pm and the city was dead by quarter past. Back again on Friday. ‘Could put it in on Monday afternoon, sir.’ Fat lot of use that was. And it was expensive. Why not have our own publication and accept ads by phone and immediately? So we did. And we reckoned that with most of the members of each College reading the same sheet, we might not have to charge for it. The girls’ colleges got two sheets each and the men’s got three. The theory was that the girls went where the men, having read the sheet, asked them to, so it was a bit of a waste to give them the same number of copies.

A survey in 1973 showed that about 5,000 people a day read the sheet and it came out 7 days a week in term. Nowadays, it comes out 3 times a week and the web version is more prominent, collecting around 5,000 visits each weekday, each visitor taking about ten minutes and looking at about 4 pages*. Do have a look yourself on www.dailyinfo.co.uk [now with over 10,000 individual daily visitors, according to Google Analytics! - Ed, 20.01.2011].