An unforgettable whistle-stop tour through 900 years of Oxford University history.

Songs about ducks, misplaced brass noses and what to do with cherry stones are just some of the weird and wacky Oxford University traditions that you will learn about in the Sheldonian Theatre's new Oxford Guided Tour. As well as learning about the small matter of 900 years of Oxford history of course.

Starting in the theatre itself, the tour takes you past the Bodleian libraries, to the University church, and then back around to the Clarendon building, passing several university colleges along the way. The tour mainly takes place outside, so do bear that in mind when choosing which Oxford tour to go on; it's very different from the Bodleian tour for example, which takes you around the inside of the libraries. The Sheldonian Guided Tour takes you all the way from the customs that took place is St Mary's church in the medieval period to the matriculation customs of today, ending things off nicely with an explanation of Robert Streeter's famous painting that covers the ceiling of the Sheldonian Theatre. 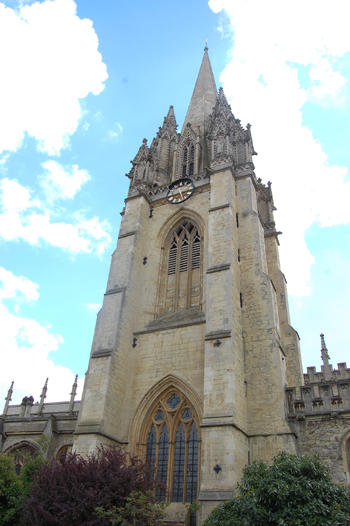 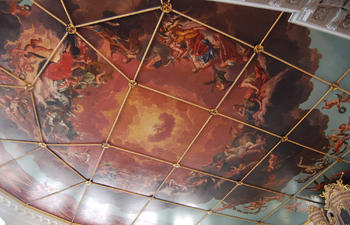 Our tour guide, David, was friendly and clearly knew his stuff. Although understandably thrown by having two Oxford locals on his first tour, he tailored the proceedings accordingly, making sure he wasn't telling us things we already knew. As a result, I learnt a lot that I didn't know about the city that I have lived in for 15 years. David also managed to inspire in me interest about parts of the city that I often overlook as a resident. As we walked through the archway of the Clarendon building, we took a moment to appreciate its grandeur. It really is an amazing building, and one that I barely glance at these days on my way to The Kings Arms or the Turf. Although the Sheldonian Guided Tour will be a different experience for tourists, I have no doubt that the guides will be able to adapt to each new group. 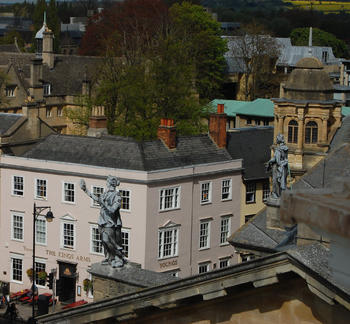 Muses on the Clarendon building and The King's Arms

At the end of the tour, visitors are welcome to ascend the many flights of stairs in the Sheldonian to the Cupola, where you can see right across the city - a great opportunity for photos on a sunny day. From the Cupola you can see the many spires and rooftops surrounding the Radcliffe Camera, take a good look at the Muses on top of the Clarendon building and imagine where the old city wall would once have been.

Rooftops from the Cupola

The Sheldonian Guided Tour is a great experience for tourists and residents alike to learn about the architectural, historical and frankly oddball goings-on of Oxford. Tours are taking place until Sunday 4th October and cost £8 with a concession rate of £6.