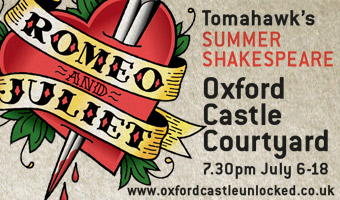 These violent delights have violent ends.

Tomahawk’s production of Shakespeare’s Romeo and Juliet is first a hoot – and then a tear jerker.

The predominantly young audience (many from overseas) watching the play within the historic walls of Oxford Castle were riveted by the power of the story. Even if Shakespeare’s language was not perfectly understood, the conflicts and ideals presented were universal.

Alex Nicholls’ production set a cracking pace, which never faltered or lost its way, as the tragedy unfolded. The initial mood of authority, order and control melded humorously into street scenes of ribaldry and drunkenness.

When darkness fell, boy power ruled. The triad of Romeo (Remi King), Mercutio (Adam Potterton) and Benvolio (Ivo Gruev) rocked. Together they crash the Masked Ball given by the Montague’s sworn enemies, the Capulets. While Juliet (Jennifer Robinson) is smitten, fiery Tybalt (Billy Morton) is enraged.

Fight coach James Reilly ensured some terrific spats, in which mortal blows are struck. As events spiral downwards, the power of the acting carried the audience from laughter and slapstick to tears.

Juliet’s freshness of delivery was always intelligent and psychologically spot on. Just watch her talking to herself so artlessly, unaware of our unseen eyes. Romeo too, is believable. His transformation from playboy to tragic hero with blood on his hands was portrayed with eloquence and ease to a modern audience.

Along with musical director Francisco Vera’s wonderful music, unlikely characters tracked the play’s emotional depths. Benvolio’s exuberance and anguish locked the audience’s attention. They were fascinated by his unerring physical clowning - and by the authenticity of his grief.

Rachel Wilmhurst’s Nurse was cheerfully uninhibited in the Capulet household, sure of her place – and in the affections of the child she had raised since birth.

The pity of youth and hopes squandered brings to mind Phillip Larkin. Yet Shakespeare’s insights into generational conflict, parental ambition and teenage angst held the contemporary audience to the last flamenco chord – and the fluttering of Oxford Castle’s flag in the gathering darkness.

I never really thought of Romeo and Juliet as a comedy. You know the one; Shakespeare’s most famous tragedy? The one where our eponymous hero and heroine are both dead, by their own hand, by the end (oh, sorry – SPOILER ALERT!). But tonight’s show at Oxford Castle Courtyard was pretty amusing.

Oxford Castle Courtyard is a striking setting, and as the sun went down it wasn’t too difficult to imagine we were ‘in fair Verona’. Well, apart from the rather chilly wind, and the aeroplanes that sporadically flew over throughout the performance, both of which occasionally drowned out the dialogue. But since this is one of the most famous love stories of all time, it wasn’t too difficult to keep up with the action.

The ensemble cast worked well together, with stand-out performances from Rachel Wilmshurst as the Nurse, and Ivo Gruev as Benvolio providing much of the aforementioned comedic element to the romantic tragedy. The latter opens the show with a great deal of energy, bursting onto the stage and only really losing his cheeky spark when things get serious in the second act.

Our Romeo and Juliet were both played beautifully with Remi King and Jennifer Robinson putting in heartfelt and believable performances, also with a hint of comedy thrown in amongst the declarations of love.

The staging was simple – a stepped platform providing the focal point of the show, with large, but moveable boxes placed around the staging area, which were moved around by cast members at various points in the performance, at one point forming a ‘BAR’ for the masquerade. I loved this scene, the Capulets’ Ball, started by a brief flamenco flourish from Lady Capulet (played rather ‘wicked step motherly’ by Fleur Yerbury Hodgeson) and continued with a lovely choreographed dance by the cast, with music reminiscent of Bowie’s Golden Years , likening it to the famous dance sequence in the film A Knight’s Tale.

Overall, this was a thoroughly enjoyable performance, directed and performed with a quirked eyebrow to the original text, but not so much that there wasn’t a real heart and passion to the tragic central relationship.