The Playhouse's own production.
Oxford Playhouse, Thursday 10 August - Saturday 2 September, 2006.
Steve Woodward August 17, 2006
The storyline of Thomas’s enduring farce, like most farces, is easy to follow. Two Oxford student friends are smitten by two young ladies, but can’t spend time alone with the girls unless there is a female chaperone present (this is 1892!). But not to worry, because Charley’s longlost aunt is coming from Brazil to visit. So, assignations are planned and must be kept – it’s so exciting – but the aunt doesn’t turn up! Again, don’t worry, because another student friend is rehearsing an amdram show, and has a female outfit handy… Lord Fancourt Babberley reluctantly agrees to ‘be’ Charley’s Aunt, with the imaginable consequences, especially when the real aunt arrives.

Nick Caldecott’s ‘aunt’ has sublime energy and timing. Patrick Ryecart as Colonel Chesney (father of one of the two boys) and Christopher Good as Stephen Spettigue (father of one of the two girls) add strong, highly professional support; Russell Dixon (the ‘scout’) is suitably disreputable, and Christina Greatrex, as the real aunt, has all the necessary style, poise and charm to make us believe that she is very rich and from Brazil (‘where the nuts come from!’).

Timothy Sheader’s slick production has terrific atmosphere, and an ever-present feel of music hall, from private jokes to the audience, to an old-fashioned proscenium arch frame for for the set, and each act starts with a character walking across the front of the stage with a predictive motto on a placard. There seem to be dozens of entrance points, a good few chases across, around and behind the stage, lots of double takes and pratfalls aplenty. Jonathan Fensom’s design complements the style perfectly, and Tim Mitchell’s lighting brings out the best in the set, the lovely costumes and the action.

The production is at its best during the manic, fast-moving set pieces, and I did laugh aloud regularly, which is rare. I wanted the slower, more reflective sections of the play to have more wistfulness and depth; I wanted the two young men to be really infatuated, rather than having a bit of a caper, which is what they seemed to be doing. You may say, “Yes, but this is farce!”, but I believe that, for farce to really touch us, it needs to show us how silly we all can be, especially when we think think we are at our most intensely serious.

Overall, it’s a great night out, and a high-class production, performed by a strong cast. I never even thought about looking at my watch!

Lita Doolan August 28, 2006
Inspired by student eccentricities and Varsity life, Brandon Thomas' three-act farce is set around the fictitious 'St Olde's' college. The atmosphere of quadrangles and cloisters is re-created delightfully on the Oxford Playhouse stage, which adopts the proscenium arch of the 'Royalty Theatre' for the run, where the play first opened in 1892. Much of the intoxicating comedy is driven by Lord Fancourt 'Babs' Babberly (Nick Caldecott), who 'plays the giddy goat' by dressing up as Charley's Aunt whose arrival from Brazil has been delayed. This is of great convenience to 'Babs' friends Jack and Charley who can now offer a chaperone to and continue with the wooing of their sweethearts, Kitty and Amy. The two young actresses (Emma Callander and Dulcie Lewis) do well to bring a vivacious depth of character to the minor roles of the girlfriends. Director Timothy Sheader succeeds in bringing out all of the strong characters this piece requires from this large cast of ten. The farce hits its stride like a tidal wave when Donna Lucia D'Alvadorez, the real Charley's Aunt, arrives, with a sharp, dignified performance given by Christina Greatrex.

Whilst behaviour scandalous to Victorian England, such as unchaperoned young girls appearing in mixed company, is now innocuous, this revival offers a thoroughly enjoyable evening for all. One of the great strengths of this production is that it entertains both children and adults alike, with physical comedy routines (the hysterical tea party scene is a huge hit) mixed with deliciously risque quips from 'Babs'. Oxford Playhouse Pantomime goers will recognise a familiar face in Russell Dixon, as the long suffering manservant Brassett who turns in an admirable performance reflecting the chaos of the farce that is unfolding around him. After all, 'while there's tea there's hope'! 'No humbug, straight as a die', Tish Francis produces another piece of high quality and distinctive theatre for the Oxford Playhouse. For many years a national institution, now is the time to toast this play's longevity by taking a trip to the Oxford Playhouse and treating yourself to one of Colonel Sir Francis Chesney's (Patrick Ryecart) 'rattling spanking brandy and sodas. After all there are two intervals!
Simon Tavener August 17, 2006
I can't easily find the words to express my disappointment at this production. One of my favourite plays has been ruined by a director who just doesn't understand the genre. The younger members of his cast are similarly blighted. It is left to Patrick Ryecart, Christopher Good and Christina Greatrex to show some understanding on how delicate you have to treat this kind of period farce.

The gurning and over-acting encouraged by the director has disturbed the balance of the farce. It is essential to treat this genre seriously - allowing the text and situation to generate the comedy. Imposing irrelevant business does not improve our enjoyment.

I saw a joyful production of Charley's Aunt at the Royal Theatre, Northampton many years ago - they got it spot on.

I regret that this production has gone out under the name of Oxford Playhouse - it will do little to enhance their reputation.
I didn’t know this play before going to see it, but the Playhouse’s blurb made it sound a lot of fun so was looking forward to seeing it.

I’m glad I had free tickets.

I'm relieved that I wasn't the only person who was intensely frustrated by this production; for quite some time I’d thought I was, judging by the reactions of the audience on the night I attended! I too nearly left after the first act, but strangely my companions were enjoying themselves… I thought they had taste.

The overacting really was very painful at times (particularly from the three younger men), and I can only assume that the director told them to act this way. Thankfully the older actors seemed to have ignored any such instructions and turned in far more believable (and less irritating) performances. I'm sure that the butler was being funny, but I really couldn't hear him (a combination of the accent and lack of volume). The female love interests were just nondescript – not particularly alluring and I certainly couldn’t see why the men would be falling over themselves to get to spend time with them.

After the first act (which was the worst) I decided to sit back and try to let it just wash over me, preferably by falling asleep (I failed). I managed one or two laughs towards the end, but that was to prevent myself crying.

The Moose 24 Aug 2006
A bad shot for the usually excellent Playhouse. Farce is about realistic people trapped in an absurd situation, not a bunch of grotesques mugging for all they're worth. Unless you can believe in the characters, the humour simply becomes cheap and silly. The audience were very nearly treated to the farcical situation of a member of the audience screaming at Babbs, "Interact with the rest of the cast, not the first three rows of the stalls!"

Perhaps those with a taste for Reeves and Mortimer might enjoy it more than I did.
Doctor 23 Aug 2006
As another reviwer has observed, farce has to be treated with care. If this had been an amateur production the misunderstanding of the difference between mannered delivery and overacting would have been acceptable. But to see professional actors behaving like this was, in short, highly embarrassing. Only Patrick Ryecart and Christina Greatrex showed any understanding of the genre and the text.
A profoundly disappointing production. My neighbour left at the first interval. I wish I'd joined him.
Beth 21 Aug 2006
For an evening that does not stretch the 'little grey cells' - here is a night of panto for grown-ups.

A silly story acted with good timing meant an evening laughing, not just at the actors, but at myself for enjoying such ludicrous slapstick.
Magnolia 15 Aug 2006
Review this 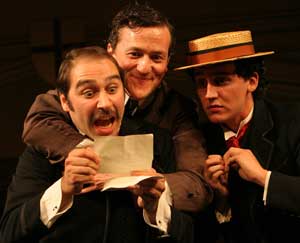 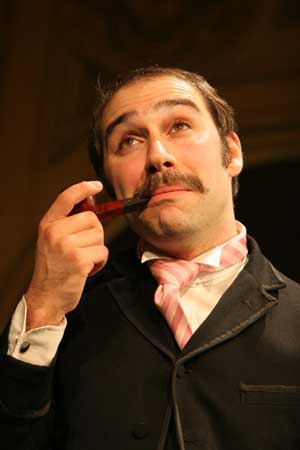