Visit website
Scott Bolohan April 20, 2016
The hard look at love and morality, the questioning of authority and truth would fit in very nicely with Shakespearian themes

In the 400th anniversary of his death, Shakespeare's work is everywhere again. And yet for all of the celebrations of The Bard, it's sometimes hard to remember that he was actually a human being who existed outside of the rhymes. Even the idea of Shakespeare having a daughter – like a real person! – seems somehow strange, and that's even taking into account that it's likely you've been to her house in Stratford-upon-Avon where most of this play is set.

The Herbal Bed is the 1996 play written by Peter Whelan for the Royal Shakespeare Company about the real life accusations of adultery made against Shakespeare's daughter Susanna Hall (Emma Lowndes) and haberdasher Rafe Smith (Phillip Correia). The accusation was made by medical student – and town drunk – Jack Lane (played by the eminently unhinged Matt Whitchurch) who has been living with Susana and her husband, the physician John Hall (Jonathan Guy Lewis). Even the family's servant Hester (the charming Charlotte Wakefield) is drawn into a morality battle of her own. Given how few facts we know about the trial, Whelan imagines an intricate story of sex, lies and medicine.

Tense from the start, James Dacre directs the powerful cast with a sense of urgency throughout, helped by the simple, dark set design. As the play progresses, the drama heightens. Brought before ecclesiastical court in Worcester, the bishop's assistant Barnabus Goche (Michael Mears) is menacing as he leads the trial, bringing to mind the Salem Witch Trials which were to place in the years following. It also touches on invasions of privacy, which gives the piece a contemporary feel despite the period setting.

Unlike Shakespeare's work, the lack of humour in the drama is noticeable, almost begging for a laugh to break the tension. But the hard look at love and morality, the questioning of authority and truth would fit in very nicely with Shakespearian themes.

While scholars likely to debate what Shakespeare would think of his lasting fame, it's almost impossible to imagine Susanna had any inkling of the possibility of a play being performed about her four centuries later; nothing in the play suggests she thought of herself as anything other than just a regular woman. In fact, her father is only hinted at – and never by name – something The Bard would appreciate. Always leave them wanting more.

Is it always a sin to tell a lie?

The Herbal Bed attempts to answer this question as well as exploring contemporary concerns around personal privacy. I would say that it gives an unconvincing answer to the first question and fails spectacularly to address the second – not least because the play is set in 1613 when modern concepts of privacy didn't really exist.

The framework is a minor incident in the life of Susannah Hall (née Shakespeare), the wife of John Hall, a respected physician.

Susannah also has passionate impulses, which go unreciprocated by her puritanically-inclined husband, who is ruled by his head rather than his heart. Her passions come to a head during the briefest of encounters with a neighbour which amounts to little more than a quick, though ill-advised, snog. Lane catches wind of this and makes drunken allegations of adultery. Dr Hall urges his wife to pursue an action for slander.

The matter goes to the ecclesiastical court where, in a curious scene which is unsupported by preceding events, a church-appointed judge conducts an inquiry into the case's background with all the subtlety of a pantomime villain. The interrogation culminates in a denouement which is as implausible as it is bizarre - a moment of supposedly high drama which was met by laughter from the audience.

The Herbal Bed is beautifully staged and there are some good individual performances. Sadly this does not make up for a script which lacks focus. Susannah's father would have understood that the issue was not privacy, but a potentially devastating loss of reputation in a small knit community where such things mattered – a world where 'he that filches from me my good name robs me of that which not enriches him and makes me poor indeed.' 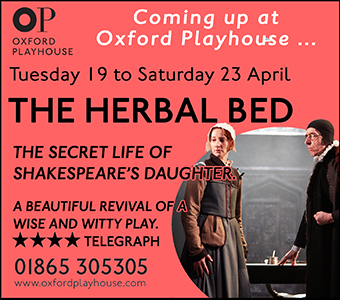