On the one hand, there's an ageing monarch and a Britain that is about to be split into three (do stop me if you've heard this one) – on the other, two families who are so dysfunctional that it's like an episode of EastEnders on steroids.

Part of Shakespeare's genius is to hold up a mirror to the audience – reflecting their hopes, fears, prejudices and world views. In our generation this play and this production reflect contemporary fears about old age. Michael Pennington's Lear is a masterly study of an active older man who passes wealth and power on to the next generation only to decline into isolation, physical frailty and feeble-minded madness when his supposedly loving family rejects him.

In this production, there was a strong supporting cast with particularly good performances from Pip Donaghy as Gloucester and Joshua Elliott as the Fool. It was sometimes difficult to hear the female actors, particularly when they turned their backs to the audience, but this may be due to the technicalities of adjusting to a new theatre in a touring production, which was one of the points touched on in Wednesday's post-production Q&A session with the audience.

One audience member asked Michael Pennington about the differences between this Lear and his critically acclaimed 2014 performance in Brooklyn. Michael spoke about the obvious differences in terms of personnel and material and the fact that he is now two years older in terms of growing in character. However, he thought that the biggest difference was that the New York theatre was larger and more open, with a three sided layout that enabled him to talk directly to the audience – 'Lear is a big play and deserves to be done in a big theatre'.

Penny Boxall April 27, 2016
This is an expansive and gripping production, and a searing reintroduction to the pain and insight this play affords

Max Webster's King Lear starts with a bang. Literally - Cordelia, played by a gentle Beth Cooke, strides onto the stage with a rifle and blasts it into the audience, releasing a shock that will ripple out over the next three hours. It is a canny move: it is, after all, the blow that Cordelia delivers to Lear - her refusal to 'speak her love' for him - that throws him into a toddlerish rage and sets in play his deep insecurities, the grasping and violence of his other daughters.

This sharp little prelude over, we are invited into the last moments of Lear's reign, and a late-Thirties setting resplendent with elegant evening dresses and a still-magnificent King in military dress uniform. Michael Pennington's Lear is traditional - irascible, increasingly doddery, white-bearded - but entirely convincing. This first scene gives us a glimpse of the former king we will never know - one with power and might, a kingdom divided on his words - but Pennington infuses his portrayal with the flavour of the diminished, flower-strewn, infantile creature he will become by the end of the play. The two roles - ruler and baby - aren't separate in Pennington's rendering; they are living facets of the same man. He is as moving a Lear as I have seen for years.

Insightful interpretation is lent to the text so that the various stems of themes - blindness, the inability to know the self, the bond of blood - are woven like floral garlands throughout. The relationship between Regan and Goneril (played by a warmth-to-daggers Sally Scott and coolly cruel Catherine Bailey respectively) is delicately managed; the pair play nicely when it suits them, and slip each other poison when it doesn't. Gavin Fowler's hearty Edgar and the saturnine Scott Karim as Edmund are similarly well-coupled (though for their differences, in this case). In particular, Joshua Elliott's Fool is excellent: charming, warm, and giving his Nuncle a uniquely hard time. In this production he is feminised and mothering, so that his hard home-truths are like birthday cake harbouring a blade

A few slightly perplexing choices stand out. In a relatively small cast, the audience expects some doubling of roles; it doesn't necessarily need each of those roles to be assigned a different (and not always pitch-perfect) regional accent. In the course of the play we encounter Liverpool, Birmingham, Glasgow, Yorkshire and Lincolnshire, and some 'undefined'. 'Who is it that can tell me who I am?' Not these accents, sadly.

These distractions aside, this is an expansive and gripping production, and a searing reintroduction to the pain and insight this play affords. 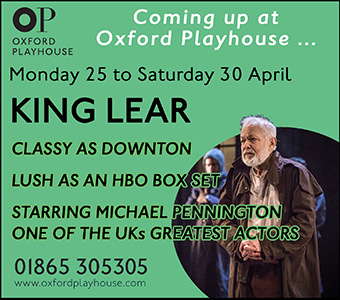