Visit website
Gabrielle Brown August 18, 2016
It’s back to Neverland for a red-hot adventure

The boy who never grew up is back, and he's looking very different indeed (although not altogether unfamiliar...). This sequel to J. M. Barrie's legendary tale is a daring, satisfying continuation of the story, providing enough echoes of the original though ramping up the action and slipping in enough neat twists, tricks and laughs to ensure your entire theatre-going family has an awfully big adventure.

Any mention of Pan, whether you're an enthusiast or not, will have you pondering just how grown-up you are, and indeed, whether or not you want to grow up at all. Similarly, in a theatre bustling with an equal amount of children and adults (or 'pretend' adults, like me), poised to see what happened next to Peter, one might ask will this be fun, or thought-provoking, or intelligent, or silly? The answer, is yes it is all these things.

We start 20 years after Wendy and the Lost Boys returned home. It's 1929, there's a lot of Charleston-ing going on (and other 1920s dances that I could Google but can't because I'm on an internet detox), and all the now grown-up children are having strange dreams of Neverland. They decide to return (a simple matter of putting on children's clothing and finding a fairy to provide you with fairy dust) to see what the devil this could all be about, and find not the eternal summer island they remember with fondness but an autumnal, cheerless land, and a Peter who doesn't quite seem himself. Wendy and co. soon realise that help is needed… but they're not sure with what, or whom. No one, and nothing, is quite what it seems.

We follow the children, Peter, Fireflyer (the 'new' Tinker Bell; a naughty, cheeky liar of a fairy, who Michael Hugo plays with sparkling gusto) and a spooky figure of a man, Ravello, on a gruelling mission, dappled with eerie happenings and beings, to find treasure, but along the way Peter becomes less like a fun-seeking boy and more like a familiar, power-hungry character who everyone had thought had died at the jaws of an enormous crocodile twenty years previously...

If this all sounds a bit serious and scary, then don't forget that this is first and foremost a children's story, and so with the dark comes the light – oodles of comic turns, clown-like characters (keep your eye on all parts played by Lauryn Redding, she is hilarious) and captivating acrobatics and dance. The set is delectable and the costumes delightful (I'm going to sound like a middle class bohemian-wannabe-hippie now, but they would fit right in at Wilderness festival… sorry if that means nothing to you/you despise Wilderness/both.) The lighting and props are absurdly clever, too.

So, does it all end well? If you remember the original (I have to admit my knowledge of Peter Pan has been seriously marred by having been forced by my daughter to watch the CBeebies stage adaptation approximately three-thousand-million times) then you might not be sure whether or not it did. Is accepting that you must, eventually, grow up a good ending? I'm still not sure. Personally, I rather miss being young. I wasn't a carefree child (Thatcher ran the country, for one) but I had more vision than I do now – dreams felt like possibilities, not fanciful wishes. I have never been sure what the moral of Peter Pan was, and this sequel, although fabulous, has left me none the wiser. Perhaps there needn't be a moral; perhaps the point of it all – of everything we do – is not to learn a lesson, or even to have dreams, but to make sure we have an awfully big adventure along the way. 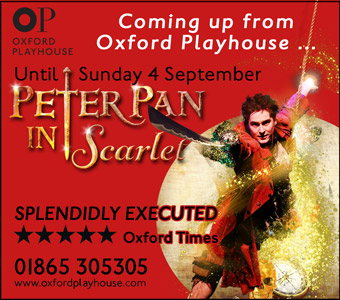