Creation Theatre. Sherwood Forest appears in Headington.
Headington Hill Park. Thu 20th July - Fri 8th September 2006
Lita Doolan August 31, 2006
A mammoth multi-level tree house re-creates the Major Oak where the legendary merry men hide in the trunk and dominate Sherwood Forest. Humorous modern day 'Crimestopper' posters about Headington Hill Park urge theatregoers to inform on the protagonist without delay. The cavernous underbelly of a Norman Nottingham is hinted at by the cast popping up from an assortment of entrances, adding a buzz to an evening of adventurous story telling. This fast moving show is action-packed, complete with a bow and arrow contest and white-knuckle fight scenes. In fact the high level of entertainment this show offers distracts from the sheer volume of research and authenticity writer Darren Ormandy has injected into the production. Ormandy's writing intelligently embraces historical fact, for example that Robin is likely to be of Norman descent as his name is derived from the French Robert. This gives us a modern day hero, played brilliantly by Tom Peters, who includes all of society in his quest for justice. Director Adam Meggido is experienced in working with new writing and brings out from the text a fine hero that the audience warms to and takes to as 'our own'. Romance between Robin and the pretty, sword-wielding tomboy Marion (Jennifer Matter) blossoms throughout the play as the audience wonders: will they or won't they get together by the end.

The villain is the Sheriff of Nottingham (Boo!), played by Scott Brooksbank, who excels at audience interaction, threatening to raise our taxes and take our land, bringing home a serious and contemporary interpretation of the tale. The action is set before King John would have been forced to sign Magna Carta in 1215, so the Saxon populace would have laid claim to few rights. An equally dynamic villainess is Lady Gisburne (Eleanor Montgomery) who genuinely terrifies, aided by spectacular lighting. Folk music accompanies the changing scenes, specially composed by accomplished folk musician Jon Boden who has us humming his catchy tunes as we roam through the 'Glen' to our parked cars. The show is so full of fun and exciting antics you just can't resist sharing them with the first person you meet. And so this story of a little man, first mentioned in the poem 'Piers Plowman' of 1377, who stands up against a seemingly all-powerful tyrant is retold and reinvented by each generation. But if you are travelling north via the old Roman Watling St, I would still watch out for those merry men!
Deirdre Ruane July 26, 2006
Watching Creation Theatre's summer lineup of shows go by on the sides of buses for the past couple of months, I've wondered how Robin Hood's writer Darren Ormandy felt, with his brand-new play sandwiched between Macbeth and The Merchant of Venice. It seems like a lot to live up to – unless, of course, you don't strain to live up to it and instead do something completely different. This show doesn't demand to be approached with reverence as part of the literary canon. It's more down-to-earth and accessible, and arguably more fun. I found myself wondering if this was how a play by Shakespeare or one of his contemporaries might have looked to an audience of the time: a crowd-friendly romp combining fighting, knockabout fun, romance, scary moments and even a play-within-a-play (this one, as you might expect, goes hilariously wrong – to the horror of Seamus Allen's deranged luvvie Alan-a-Dale).

This is Ormandy's first produced play, though he has another coming up at the Edinburgh Fringe Festival later this month. (A member of Creation, he's also acting in their current production of Macbeth.) It's scripted like a big summer blockbuster and careers between slapstick and solemnity via lots of swashbuckling, perfectly set under the huge old trees of Headington Hill Park.

Don't expect historical accuracy, but if you were expecting that from the story of Robin Hood in any of its many forms you're bound to be disappointed. What you can expect is a lot of seriously funny scenes, of which one of the best is Friar Tuck (Angus Brown) and Maid Marion (Jennifer Matter)'s money-scamming sermon routine with its nonsensical parables ("as the daisy is to the catapult, so are we to the love of God"). You can expect arrows flying everywhere, daring escapes, impressive effects (though they did occasionally misfire) and, underneath the exuberance, a strong thread of mystical wonder. The play is haunted by the Green Man, the spirit of the forest, and Robin himself – played with brooding gusto by Tom Peters – is portrayed as the hero-king of world legend, destined to be reborn again and again. Also, judging by last night's audience, you can expect your children to enjoy it immensely.

I thought you had to go to the cinema for this kind of thing. I'm very pleased to have been proven wrong.
This is a hugely enjoyable production; lively, well-paced and well-directed. I disagree with the criticisms regarding the complexity of the plot and the quality of the acting. The cast were all extremely talented, strongly led by Tom Peters as Robin Hood, and also featuring brilliant performances by Scott Brooksbank as the deliciously cocky (though suitably evil) Sheriff of Nottingham, and Seamus Allen (who seems to be made of rubber) as the luvvy poet Alan a Dale. Admittedly, the script is patchy, taking rather too long getting going and containing rather too many trite pep-talks by Robin Hood, but the actors carry it off.

The special effects are very impressive, particularly the arrows whizzing about and the extremely realistic blood and gore. The children loved these, as you may imagine.

If you're a diehard devotee of the various Robin Hood myths (and few people are) you may disapprove of this production, but if you want an entertaining evening with plenty of jokes, scary moments and buckles being swashed, don't miss this.
Monica 31 Aug 2006
I found the plot of Robin Hood absurdly complicated. If I couldn’t understand the random fights and songs, just who robin was trying to save this time, and the time jumps, then the four year olds which made up most of the audience certainly couldn’t.

The play starts with Alan Dalé – an actor, who starts everything off with explaining Robin’s past. He is the funniest character in the play, working perfectly with the audience, but still his mad gallivanting around the stage and juvenile (but hilarious) slapstick fails to get the plot across.

Robin Hood, played by Tom Peters, is dashing, good-looking but can’t deliver a line. He was up against the wind but still he shouted in the same tone throughout the entire play. Maid Marion struts around, yelling hoarsely and try as she might to sound tough and domineering, she doesn't stop pouting for the entire play.

Although the actors weren’t much good, it was the script that really let them down. The jokes were funny, though few and far-between but the plot just didn’t follow through. At one point Robin was in the forest, the next he was married, the next he had a sister, the next he was dead. And that was all I could pick up.
Rosie 28 Aug 2006
Creation Theatre’s 2006 Robin Hood is a well-balanced blend of action and dialogue, a play comprising just-the-right-side-of-cartoon characters, a nicely-paced plot with easily identifiable themes, both universal and traditional, draped fairly loosely over a generalized legend of Robin Hood.

The production visuals (think Swampy crossed with Cropredy after a trip to the Army Surplus store) are magnificently matched to the tree-dominated open-air setting of the park, while the skills on offer are varied and of a consistently good quality: the actors sing, tumble, tussle, clown, cross-dress and orate to amuse their spectators. There are jokes at every level - sight-gags, puns, drag, riddles, slapstick – and for all ages; nobody needed a familiarity with the Robin Hood story to find something funny in this Sherwood barrel of laughs.

If I must find two criticisms, these are that the direction provides slightly too much intrusion into the audience (at least for those not in the mood for participation) and that the writing makes too much fusion of the Robin Hood story with Arthur, the Green Man, Herne the Hunter, and a Glastonbury-style mysticism that just didn't do anything for me (or for Robin Hood, I'd say). However these are small and easily tolerated matters in the face of an enjoyable evening of lively and humorous dramatic entertainment by a small, strong, brave and talented company – a merry band indeed.
E. Towson 8 Aug 2006
Review this 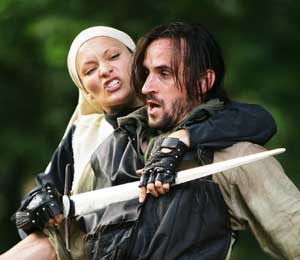