'Who wants to play war?' Three enthusiastic young Bristol men are off to Catterick to enlist, and after basic training begin their new adventure, a tour of duty in Afghanistan. The impact of their decision, while not immediately recognisable to these excited 21-year-olds, becomes far more devastating as the stories unfold. A play that could translate globally, Pink Mist has much to offer school and college students engaged in sociology, history, and world politics, a would provide a good resource for those involved in debates on the advantages and disadvantages of enlisting young people in military service.

Playwright and author Owen Sheers describes Pink Mist in terms of a transformation 'from radio to page to stage'. It was originally commissioned for BBC Radio 4's More than Words Listening Festival back in 2012. It subsequently won Wales Book of the Year and the Roland Mathias Poetry Award in 2014. His poetic work drew inspiration from a large research project which used interviews with wounded service personnel who were part of the International Military Force deployed to Afghanistan, along with the heartbreaking stories and personal accounts from family members and close friends.

First staged at Bristol Old Vic in 2015, Pink Mist is outstanding physical theatre. Tonight's audience were transfixed as the action interwove a mixture of graceful and amazingly acrobatic, choreographed movement with strong soliloquies and two-way conversations. The realistic re-creation of scenes took full advantage of the lighting and soundscape with powerful imagery and the use of only a deck chair and wheelchair at the disposal of the actors.

The comprehensive programme was indeed a welcome surprise as it included author's notes plus the full script. A close read revealed that it was Arthur's (Dan Krikler) professional debut - and it was a significant and commendable theatrical performance at that. Just as impressive were the talents of Taff (Peter Edwards), Hads (Alex Stedman), Gwen, Arthur's girlfriend (Rebecca Hamilton), Lisa, Tadd's wife (Rebecca Killick) and Sarah, Hads' Mum (Zara Ramm). Each actor was an integral piece of the intense heartbreaking storytelling. Through the harsh reality of warfare and through the women in the men's lives, the two-part work gathered momentum. The clever collaboration between Designer Emma Cains, Lighting Designer Peter Harrison and Composer/Sound Designer John Nicholls made possible the effective, profoundly moving and at times almost heart-stopping interface with the audience.

'Going somewhere, getting something done'. It is a true account of the hardships that still face UK military personnel today. Their chosen career has many hidden challenges and the road to recovery is lengthy. The audience empathises with the characters, admiring their courageous honesty and the powerful nature of the piece - a reminder of the cost to nation of upholding peace. The intensely captivating performance was met with loud applause, and the actors themselves appeared conscious of the intensely powerful work.

Directed by John Retallack and George Mann, this is a masterpiece worthy of more than five stars, and if this audience is anything to go by, a possible candidate for National Awards and return seasons. 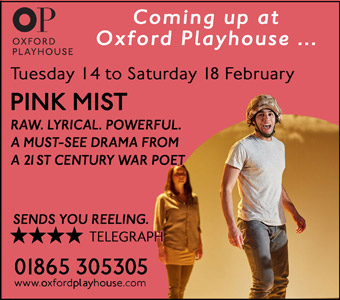