Puppetry of the Penis

While the puppeteers warmed up the main act, the audience was treated to a generous helping of stand-up by ballsy Canadian comedienne, Dana Alexander. Dana waxed philosophical about her ample breasts, her uncontrollable pubic hair and, of course, penises. Her observations were sassy, without being smutty, and set the tone nicely for the headline act.

Puppetry of the Penis is an hour of full-frontal male nudity and genital manipulation but, thanks to the cast’s cheeky grins and delicate handling of their material, the show is witty and playful – dare I say, even charming – but not crude.

The show is about the penis, but it is not about sex. Rather it is a silly celebration of the flexibility of the male member and the atmosphere created by the American/Ozzy duo is more ‘Tap Dogs’ than the Chippendales.

When the puppeteers, dressed in capes, socks and trainers, bound onto the stage, the audience of eager females (and a few bemused males) greet them with hearty enthusiasm rather than the whooping hysteria that typically welcomes strippers.

The boys waste no time in embarking on the ancient Australian art of genital origami, and it isn’t long before the show is in full swing. With mischievous banter between themselves, the lads set about manipulating their manhoods into a staggering array of ‘installations.’

They fold and flip their phalluses and stretch their scrotums, in order to treat the room of eager females to a mind-boggling array of creations including architectural landmarks (The Eiffel Tower, Ayres Rock), culinary dishes (hamburgers, hot dogs) and even animals (the pelican was a particular hit).

The grand finale sees a willy transformed into a windsurfer, and its owner propelled across the stage, on a skateboard, by an electric fan.

Puppetry of the Penis has been touring for fifteen years, but to prevent the act becoming flaccid, the performers have sensibly thrown some technology at the gimmick. On their latest tour, the audience are issued with 3D glasses and the technology is used to magnificent effect as the screen at the back of the stage captures every inch of the action.

These enthusiastic showmen have turned every boy’s bath time hobby into a theatrical extravaganza. It’s not dirty, just daft- and if you’ve got a vivid imagination, a strong stomach (you’ll need it for ‘woman’ installation) and a sense of humour, this show is a must-see.

Marie The Minx September 16, 2008
Ok, I have spent ages trying to think how best to describe this show. If you do a web search, you will no doubt find some pretentious arty-farty reviews about contemporary art and reclaiming the penis etc. But all I can say is, this is just a play about two guys jumping around on stage playing with their dicks for an hour. That's it. And it works.

For reviewing purposes, I will make some insightful comments. The female comedienne who warmed up the show was good and I enjoyed her dry sense of humour. However everyone was just there to see one thing - the cocks - and after 10 minutes or so her act began to drag as people realised this was not just an introduction. Her act was funny but would have been much better had it just been used to warm up the audience for a quarter of an hour then directly introduce the show. However, after she had gone on far too long, she then announced there would be an interval. Cue audience frustration.

When the main act started, the guys attached to the penises were great. Very natural, the script flowed, and they were great actors (as it really didn't seem like they were acting. Or maybe they weren't). They were Aussies, they looked pretty normal, one was a bit like a sexier Russell Brand, although I'm sure no-one went to see their faces. They basically just twisted and manipulated their dicks and balls into strange shapes - they referred to the different shapes as 'installations' for some reason. I won't go into details at that would spoil the surprises for you. They just seemed like two mates playing with their willies in front of an audience, which effectively is all it was. The penises themselves were not overly huge contrary to what I was expecting, but were certainly very flexible and full of character. No, I never thought I would write a line like that either.

The script was funny and bang on cue of the British dry sense of humour, and the show was just about the right length ('scuse the pun). Obviously, do not go if you are easily offended, or scared of willies, and don't take your nan (unless she is really right-on) or anyone you would be embarrassed seeing cocks with (e.g. perhaps your boss, or ladies from church). There are no erections, no sex, no porn - just a lot of fun. Most of the audience, as expected, were women, although I was surprised to see a handful of men brave enough to go (no pun intended there either).

There is not much more to say, except to reiterate that this is just about watching two guys play with their dicks and balls for an hour. I haven't laughed so much in a really long time, it was great, and does what it says on the tin. Go and see it for a great night out with some open-minded girlfriends.
OH MY GOD what a weird show but it was quite interesting.
I kind of knew what to expect but I was still shocked at what they could do with their bits, they even showed the guys how to make a hamburger out of their parts.

I was really shocked at how many men came to watch the show. I think they were inspired by it (they will all say that they're not but we know better don't we ladies).

They even sold books that taught you how to do some of the puppets with pictured diagrams. 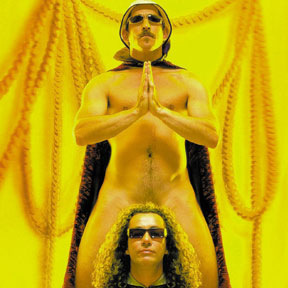