Based on Angela Carter’s short story, this is a modern reworking of Beauty and the Beast for adults
Sold Out
Burton Taylor Studio, Mon 11 September - Sat 16 September 2017

Darling of the A-level syllabus and origin of every dark fairy tales television series, Angela Carter’s short story collection The Bloody Chamber is iconic as The Handmaid’s Tale, and similarly sewn throughout with voluptuous, unsettling, feminine fury. The whispers are already out about this rare performance of the sharper of Carter’s two adaptations of Beauty and the Beast by Louise Egan and theatre company Marvellous Machine. My plus-one is a no-show and the ticket is seized and rapidly reassigned. The house is full; the beast’s sharp-tongued valet (irrepressible James Webster, a touch of candlestick in his monkey) is ribbing the audience, dealing, folding us into a treasure-house stage of gold, red velvet, pearls all the seductions of Venice in a white rose-petal snowstorm.

Wisely the company foregrounds Carter’s prose; Elwira Tromfinczuk, che bella, another pretty thing to be betted and lost by her drunk, swaggering father (Ashanti Wheeler, blustering and velvety), spits out the rich words, capturing the ice and vinegar among the pretty flowers. An Orlandoesque band in a multi-instrumental forest (Becki Reed, supported by Tim Hennessey and whichever performer’s hands are free at the time) provides horses, wind, birds, and the music that throngs in the Beast’s abandoned planet of a castle. Beauty receives gifts of marmalade and electricity along with diamonds and furs. The Beast, played with otherworldly intensity by Ellen Publicover, is shy, serious, monstrous. Clockwork Laura Boon is part steampunk maid, part primetime android as she gently, generously includes the audience among the soulless automata. There are nursery touches and stripper’s tricks; nappy pins and discarded human skins. There is luxury enough to sink into; blood-stained roses and rich incense, curling from a ginger jar. But the performance has teeth in its red riding habit; the dizzying whirl through the golden cold-lit castle; and the bitter incomprehensibility of Beauty’s choice. 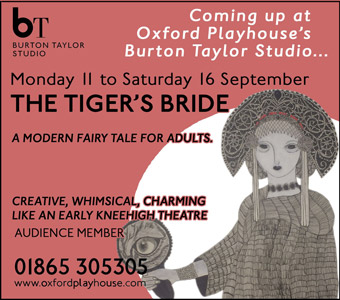