Rita, Sue and Bob Too

Visit website
Kathryn October 25, 2017
Thatcher’s Britain with Her Knickers Down

Rita, Sue and Bob Too is Andrea Dunbar’s semi-autobiographical play about growing up on one of Bradford’s poorest estates in Thatcher’s Britain: it was first staged at the Royal Court in 1982. It tells the story of two teenage girls and their affair with an older man, the man whose children they babysit in fact. The play is very funny at first: the girls’ introduction to sex in the car (and be warned, this is reasonably explicit!) is funny rather than sexy and the girls are curious rather than excited. In their miserable world this is something different. They don’t seem to mind sharing Bob either – life, particularly for Sue, is to be enjoyed while they can do so.

Quite quickly though the undertones of poverty and hopelessness start seeping through the seams. The girls move on from school to a YTS scheme which will lead nowhere; Bob is running out of work and will have to give up his car. He blames Thatcher for the state of the country – (‘Look what happens when we have a woman Prime Minister’): the girls are ignorant about the world beyond them and don’t really care. Or so it seems: after a while you do notice that Rita is a bit different from the carefree Sue: she is the one who has aspirations to move to London to work (an idea Bob quickly quashes); she is the one who feels guilty about the affair etc. Sue doesn’t care about anything much – she just takes what life can give her. What can these girls aspire to? A house and kids and clothes like Bob’s wife? That’s the best they can get.

Another theme is the sexism of the day – which still exists of course. It is the PM’s fault because she is a woman; Bob is ashamed because he, the man, should be the breadwinner; when the affair comes to light it is the girls who are blamed and Bob gets away almost scot-free. And, in the end, their lives carry on down the same paths as their mothers did.

The acting in this play is terrific: Taj Atwal and Gemma Dobson are totally convincing as Rita and Sue; James Atherton’s Bob feels authentic and surprisingly sensitive, and Samantha Robinson, Sally Bankes and David Walker as Michelle, Mum and Dad make the setting of the trio come alive. If I were to make any criticism it would be that there was not enough contrast in the diction. Most of the play was a shouting match: the quiet moments were telling and more would have been appreciated.

However, I really enjoyed this play, loved the music, loved the vivacity of the performance and yet have come home pondering the poignancy of the girls’ situation. Andrea Dunbar grew up on this Butterfield estate, experienced early pregnancy and domestic abuse and alcoholism and died young at 29 – these girls don’t seem to have much better to look forward to. 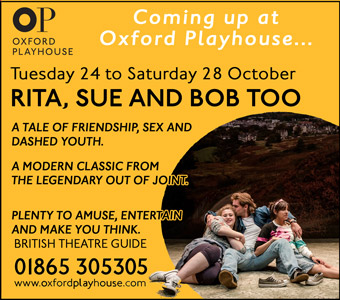