Visit website
Kathryn October 31, 2017
Doin’ The Best They Can

It is inevitable, when you know a film as well as I know Driving Miss Daisy, that you will make comparisons between the film and the stage show, and there is a chance you will be disappointed. I was not disappointed.

Alfred Uhry wrote Driving Miss Daisy based on his fierce grandmother and her driver – a woman so stern that she would send his letters to her back corrected. The period is just after WWII, a time when Jews were still reeling from the stories of the Holocaust and a time when segregation was accepted in the southern states. During the course of the play this starts to change. Everybody has heard of the big names – Martin Luther King, maybe even Rosa Parks – names associated with the civil rights movement. Daisy and her driver Hoke, like Uhry’s grandmother and her driver, were ordinary people living through these extraordinary times. ‘Doin’ the best they can’ as Hoke says. After Daisy has been deemed unfit to drive any more, her son Boolie hires a driver for her, a ‘coloured’ driver as they all were in those days. She resists his help at first but gradually he charms his way into her life, making himself indispensable. Although he has to be subservient, he also has some spunk and asserts himself when he feels he has to. I love the scene where Hoke goes to talk to Boolie ostensibly about other families trying to hire him, but in fact, in a roundabout way, asking for a pay rise. His quiet pride: ‘Have you ever had people fighting over you?... It sure feels good.’

And yet racism is always there. Daisy starts off by talking about ‘them’ and in a way that never really goes away. The scene about the Martin Luther King dinner near the end of the play is seminal: Boolie her son doesn’t want to risk losing business by being seen there (this is Atlanta) and Daisy can’t quite bring herself to invite Hoke. Things ain’t changed that much as Hoke says – sadly still too true today. Nevertheless, Daisy comes to rely on him more and more and in the end, as she says, he is her best friend. And he is.

Sian Phillips and Derek Griffiths give flawless performances as Daisy and Hoke, with just the right blend of humour and grittiness, while Teddy Kempner’s Boolie tries, only partially successfully, to look after his mother as well as grow his business. Sian Phillips is feisty and prickly at the beginning, but becomes quite gentle and dependent at the end. Both main actors age very convincingly: Derek Griffiths, in particular, becomes more stooped and stiffer in his movements.

The set is just perfect for a stage performance of the play: the play requires a lot of scene changes and a complicated set would have been an irritant, but all you see is a telephone appearing quietly on one side, a little grave sliding out, a simple steering wheel representing the car – just enough to move the plot forward.

It is a heart-warming story, beautifully acted and a great evening out. 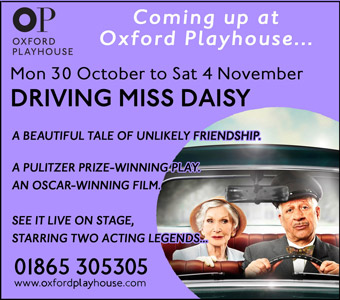