Scale: The Universal Laws Of Growth

Following the unfortunate hospitalisation of this year’s planned speaker, Geoffrey West, as Simonyi Professor for the Public Understanding of Science Marcus du Sautoy was forced at short notice to step into the breach and deliver this year’s lecture himself. He referred to principles adopted by the first Simonyi Professor, Richard Dawkin, when establishing this lecture series – to mediate between the science and the arts – and decided to draw on his own experience to explore with the audience connections between three artists and mathematics.


Marcus du Sautoy acknowledged that there continues to be a gap between science and arts, with ongoing silo thinking and a lack of cross-disciplinary fertilisation. However, his own experience has demonstrated that either consciously or unconsciously there is clearly a connection between the two and the exploration of the mathematics of the arts can challenge mathematical concepts and silo thinking and such cross-fertilisation can be illuminating, rewarding and enlightening for all.

The first area Professor du Sautoy addressed was the acknowledged connection between maths and music: from Leibniz to Stravinsky, who referred to the maths being seductively just below the surface in music. He also acknowledged the mathematical relationships between common musical constructs such as octaves and harmonic frequency. To illustrate these ideas further he referred in detail to the work of Olivier Messiaen, who wrote 'La Mort du Nombre', and in particular the opening to his symphony Turangalîla where the melody and harmony are based on the prime numbers 29 and 17, which are also the prime numbers significant in the life cycle of the pharaoh cicada (Magicicada Septendecim). Prof du Sautoy further expanded this theme, discussing the role of the Fibonacci series in nature, for example the number of petals on a flower, and the sequence’s importance in Indian music and the rhythms and beats used for centuries by tabla drummers and beloved by Messiaen, who was not mathematically trained but recognised the musical effect of maths in music. More recently du Sautoy - a trumpeter by training - has been involved in several projects exploring the relationship between maths and music such as PRiSM at the Royal Northern College of Music with composer Emily Howard, investigating whether you can hear mathematics and also converting five of Euclid’s proofs into music, and on 27th January next year he'll be involved in the Oxford Philharmonic Music and Maths concert further exploring these ideas and concepts.

The second artistic area Marcus du Sautoy moved onto was the visual arts, focusing on the secret mathematics of Jackson Pollack’s work. The audience was familiar with the geometry used in the visual arts, the Golden ratio etc. but the mathematical constructs in Pollack’s work were less obvious. Professor du Sautoy was aware that these came to light as part of the authentication process for Pollack’s offered for sale. Who has not thought of creating a Pollack themselves, after all how hard could it be? Very, according to du Sautoy, as what Pollack was actually creating, through his very inebriated creative process, was fractals with invariance of scale. Again this was Pollack using mathematical constructs intuitively, echoing patterns found in nature.

The final secret mathematician Marcus du Sautoy covered was literary giant Jorge Luis Borges and his short story The Tower of Babel. Borges did have an interest in mathematics and referred to text books covering four dimensional shapes. In this narrative Borges uses mathematics: the library is physically constructed in hexagons and there is an attempt to calculate the total possible number of books in the library which leads to larger scientific and philosophical questions about the finite or infinite nature of the universe. These ideas are explored in the film Interstellar and Marcus du Sautoy’s own theatre project X&Y at the Science Museum with Victoria Gould.

The lecture was convivial yet informative and did not reel to complexities beyond understanding as illustrated in the lively Q&A session which concluded the lecture by clarifying of some of the concepts introduced (Torus vs sphere); additional information (in the work of Phillip Glass and Ravi Shankar); the use of mathematics to produce clashing sounds in alarms; the mathematics of acoustics and the use of primes; fourth dimensions and the outstanding burning question for everyone, including Prof du Sautoy - what mathematical series the coloured seats in the auditorium reflects? A final clear illustration of the central point of the lecture: maths is life and life is maths. 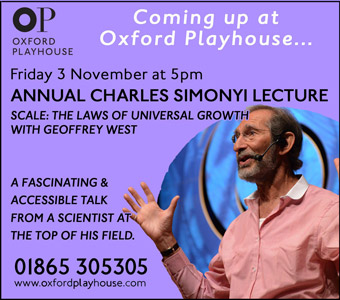