Nell Gwynn is a fabulously bawdy play for the Oxford Playhouse's 17|25 Young Company to take on. Picking up at a time of change, both for theatre and politics, the play chronicles the true figure who went from a life of poverty onto the stage as one of the first female actresses, before becoming a mistress to Charles II. The piece deftly juggles the intrigue of the with the preening performers on the capital's stage, allowing for a narrative that has both depth and emotional heft.

A rambunctious, energetic cast ramp up as the play gets into its full swing. Some interesting doubling of performers, switching at the interval, gives a more expansive look at the skills of the Young Company. In the part of Nell, Charlie Morgan flourishes in the bawdier, more provocative moments of Act 1, whilst Iszy Rathband brings a softer, more dramatic quality to the part in the second half. Yet there are standout turns throughout this talented ensemble. Jess Williams successfully ekes out laughs as both the volcanic Queen Catherine and the perpetually flustered Dryden (though Hannah More O'Ferrall is equally effective in this part). And Sam Rattue's flamboyant, piercing turn as Kynaston threatens to steal every scene he is in. If I have one mild critique, it is that I would have loved to have seen all the parts change up between acts. It feels such a bold way to manage a sprawling ensemble and give everyone involved a moment to shine, that you only wish it had been used more thoroughly.

The production itself keeps things simple, with a relatively bare stage save for a pair of columns and a segment of the theatre ceiling above it, plus an occasional gold curtain, helping show the shift of proceedings to the court. The effective design, with a nice line in well-designed costumes, is paired nicely with skillful direction from Jo Noble, who marshals her cast well, successfully keeping the energy up throughout the show.

The 17|25 Young Company's night at the theatre proved a rousing hoot. It was thrilling to watch the ensemble take on Jessica Swale's terrific text and bring life and purpose to it. It also helps that Nell Gwynn is a rich, bawdy treat, dealing in themes that are as relevant today as they were in her life time. It should also be noted that not only is the text a thoroughly enjoyable play to choose, it also has a through line back to the Playhouse, with the lead part in its initial run at the Shakespeare Globe taken on by one of the theatre's patrons and a former member of the Young Company, Gugu Mbatha Raw. 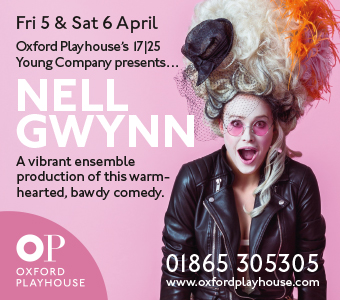