Creation Theatre's Christmas family adventure.
BMW Group Plant, Nov 2006 - Jan 2007.
www.creationtheatre.co.uk
Andrea Hopkins November 30, 2006
Curiously, some of the Creation Theatre Company rented a house next door to me last summer. They were truly awful neighbours, but they sure can put on a show. The Arabian Nights has everything we have come to expect from Creation – great energy, exuberance, and charm, and a very physical style of production, with plenty of dancing and leaping and shouting and rolling about. The cast was universally excellent, and showed the greatest commitment and conviction. Tom Edden was wonderfully expressive and charismatic as the Grand Vizier, the Robber Chief, and a host of other characters; Nuria Benet was astonishingly bendy and graceful in all her characters; the ravishingly beautiful Marina Abdeen – well it’s unfair to single them out, because they were all really, really good.

The staging was ingenious – the stage had lots of little pockets and cubbyholes out of which the actors drew various props, masks, puppets, and costumes. The treatment of the gorier bits was beautifully done in the traditional manner of medieval mystery plays, with red ribbons standing in for flowing blood, falling intestines and rended corpse-flesh. The stories – Ali Baba and the Forty Thieves, The Little Beggar, Es-Sindibad the Sailor, How Abu Hassan Broke Wind, The Wife Who Wouldn’t Eat, and the Envious Sisters – are all inhabited and enacted rather than simply told, and take illuminating place within the framework of the evolving relationship between the Great Shahrayar and Shahrazad. There were many funny moments – though children might find the early sections a bit dull (if mine is anything to go by) they will certainly wake up and start laughing by the time of Abu Hassan’s giant fart, and from then it’s total engagement. The music was gorgeous, and for once not too loud.

It’s better than last Christmas’s The Snow Queen in one important respect – the venue. The celebrated Mirror Tent is so unusual, and so scrumptious, with its beautifully draped ceiling, elaborately carved and gilded pillars and painted panels, it gives a flavour of luxury verging on decadence. It was perfectly warm and comfortable. Its only slight disadvantage is that it is somewhat insubstantial, and this means that the occasional boy racer screaming round the ring-road, or the police helicopter, can intrude on the performance. The seating is arranged in three rows – A, B and C – around the central stage, which is raised to about eye level for a seated person, and within the rows, cabaret-style around tables. You can order a variety of tasty middle-eastern treats to eat and wine, beer, spirits or sodas to drink. If you sit in row A you will see and hear everything, though you might be a tad too close to the Golden Waters featured in the story of The Envious Sisters. If you sit in row B, and you’re not behind someone enormous in row A, you will have a pretty good view but you might miss some of the stage-level action. If you’re in row C, you may have the advantage of comfy sofas rather than little chairs, and if you’re at the back you can stand up to catch the low-level stuff without discommoding anyone behind you; but your view might be impaired by pillars or larger patrons in front – something you have to think about if you’re bringing children. Which I would recommend.

Lita Doolan November 30, 2006
When courageous King Shahrayar finds out his beautiful wife has been unfaithful, he seeks revenge on all the women he marries by executing them after their first night of marriage. To save the daughters of the city, clever young Shahrazad asks her father, the Vizier (advisor to King Shahrayar), to marry her to the stately King (Gary Shelford). Shahrazad then attempts to delay her own execution by using her gift of story telling to enchant the King. Dominic Cooke's adaptation of this classic text requires only a space for story telling and a space for listening. 'Idolize', the antique Victorian spiegel tent complete with mirrors, lanterns, palm trees and cabaret style seating of tables circled about a round empty stage, fits the bill opulently. A gauze curtain, when drawn, divides the stage and doubles as a back lit screen to illustrate the story telling process. Played in the round, Tomasin Cuthbert's delightful puppets bring to life the story of Es-Sindibad the Sailor, and the company charge around the audience as if on horseback to tell of Ali Baba and the forty thieves.

The audience too has a role to play, reminding Sidi Nu'uman of the spell that will turn his evil sorceress wife Amina into a horse. Sidi goes on to beat the horse that now embodies his cruel flesh-eating wife, but as Haroun nobly reminds Sidi, 'Revenge is like a deadly, climbing weed' and, as with the central theme to all of the tales, 'to be free, you must forgive'. The ensemble cast mingles with the audience, in variegated loose trousers and fitted tops, with the clever addition of scarves (Sara Perks Designs) to accentuate the beautiful dancing - particularly by bright slave girl Marjanah (Nuria Benet) - choreographed by Aidan Treays.

Comic moments abound with non stop gags and strong character acting (especially Miranda Nolan's hilarious mime as the Beggar and Paul Shelford's camp Doctor). Pepe Balderrama takes on many disguises ranging from Ali Baba to wise old man and has the audience in fits of laughter with brilliant comic asides. The main storyline that frames the action is carried by the strong classical acting abilities of Amanda Haberland (Shahrazad) and Tom Edden (Vizier). So as the day melts into night, the tension remains, what happens if Shahrazad's well of stories dries up?

Gari Jones as Director treats Oxford to another sensation and satisfies Merchant of Venice fans with one subtle musical reference tucked away amongst Matt Eaton's exotic sound design. Jones produces the kind of theatre that leads you to discover something new about yourself, on this occasion, quite directly. As Princess Parizade finds out that to make a house the 'King of Houses' you travel for twenty days and ask the first person you meet, 'where is the Singing Tree, Talking Bird and Golden Water?' This leads you to the truth about yourself. In the endearing words of Talking Bird (Marina Abdeen) 'It is not who you think you are'. However, this is a night of sun, fun and rum goings on, for children of all ages will always remember the night Abu Hassan does his famous fart!
Arabian nights is about a king whose queen betrayed him, and he had her killed. After this terrible event the king decided that each night he would marry a different woman and the next morning he would behead her so that she could never betray him. Across town there lived a pretty, young woman called Shahrazad who lived with her father and sister. Shahrazad had a gift, a gift of story telling. Each night she and her sister would curl up together and listen to stories. One day she thought of a plan, a plan to stop all this nonsense with the king. Maybe if she married the king, she could tell him a story every night and then he would hesitate to kill her because he wanted to hear the rest of the story! So the next day she married him and as night fell she started to tell the stories.

I thought that the acting was excellent and even thought they made a few mistakes perhaps on purpose or perhaps not, they still made the play and without them it wouldn’t have been the same. They really became part of the audience and had eye contact with you. They weren’t afraid to let you know that they were acting.

I thought that the mirror tent was the perfect setting for ‘Arabian nights’ because it was decorated in a very colourful Arabian kind of way which fitted the story and was a perfect backdrop. I liked how they had trap doors where they kept the props because it saved having backstage people come on with desks and chairs etc.
Was in a round which I thought was nice to that you got to see the costumes from all angles.

The costumes started off very basic and with each story a different piece of clothing was added i.e. a poncho or a scarf. Normally I don’t like it when there's not much scenery or costumes but this seemed to work!

There wasn’t much lighting because is was daytime and light came in through the roof of the tent but there where lights on the stage and up above it’s just they weren’t being used during our performance.

Over all I think that it was the best show by Creation Theatre that I have been to see. Everything was excellent and it was really enjoyable!
fion 14 Jan 2007
When the King Shahrayar discovers his wife has run off with another man he decides that he will only marry a woman for one day then execute her. In this way it will prevent them from tricking him again.

Shahrazad decides to help the women and asks her father (the king’s advisor) if she can marry the king. Shahrazad used her talent of story telling to delay her execution.

Shahrazad tells a wonderful range of stories - Ali Baba and the Forty Thieves, The Little Beggar, Es-Sindibad the Sailor, The Wife Who Wouldn’t Eat, and the Envious Sisters –

Will Shahrazad persuaded King Shahrayar to save her life or will she suffer the fare of all the other women?

I thought this play was fantastic. Not only did the play involve the audience in reminding Sidi Nu'uman of the spell that will turn his evil sorceress wife Amina into a horse. (“The wife who would not eat”).It also made everyone laugh in “How Abu Hassan Broke Wind”.

It was a remarkable piece of drama and I would recommend it to everyone.
Molly 13 Jan 2007
Wow! thats all i can say... and two brothers taking part - what a treat, their family should be very proud of them, they are so similar yet so different when acting. Gary Shelford: I have to say you have such a strong voice: so clear and very demanding! I loved Ali Baba and also the little beggar. What brilliant actors chosen for the right play. Not a panto as such, more of a comic play!! Going to see this again. Well done.
Anon 27 Dec 2006
Oh dear, what a let down for such a normally good theatre company... The acting is of a very high standard, but the adaptation of this famous selection of fairytales is dismal, sitting uncomfortably between a panto and a comedy and being more akin to a Carry On film, but without the innuendo.

It's a pity that the stage designer didn't make greater use of the setting, which would have been ideal for this production; a minimalist approach (despite the few, rather tired, tricks), was a disservice to the luxuriance of the original tales.

Lots of screaming and shouting from the actors who were trying their best to create an atmosphere, mainly in order to please the large number of young children present. An overall disappointment, but I suppose this is to be expected in the silly season.
Josh 22 Dec 2006
Fabulous! Story telling theatre at its best in a remarkable venue.
Anonymous 27 Nov 2006
Review this 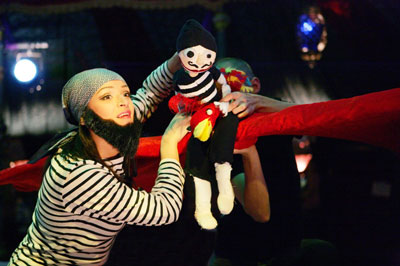 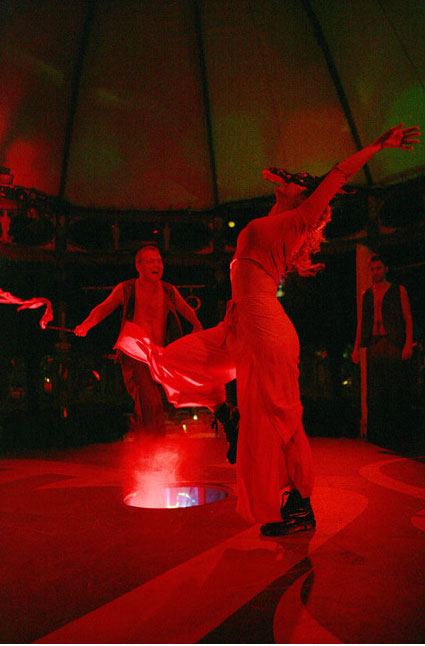 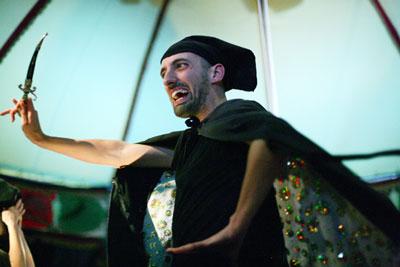