The ultimate tale of obsession, insanity and revenge unfolds within the walls of Oxford Castle
Creation Theatre in Oxford Castle, Fri June 1st - Sat July 28th 2007
Kevin Money June 6, 2007
The courtyard of the Malmaison hotel, which, I imagine, was once the exercise yard of Oxford prison, becomes the setting for Creation Theatre’s new production of Hamlet. It’s an appropriate venue, creating a stark and moody Elsinore. It also helps shelter cast and audience from the wind, something you might be grateful for if it’s chilly.

Creation have chosen to give Hamlet a theme, rather than a specific historical setting. It’s become a modern gothic, with the younger cast members decked out like a gloomy rock band, Claudius and Gertrude as their seedy managers. Ophelia and Horatio suit the look best, with glorious monochrome dreads for the former, and a wasted dandy look for the latter.

The theme is backed up by frequent incidental music from fatalistic pop groups like My Chemical Romance, Mogwai, and Radiohead. It made me think of how romantic about death young people can be, which links in nicely with some of Hamlet’s famous soliloquies. The concept of death is ever-present, but when Rosencrantz and Guildenstern turn up dressed up in skeleton suits and masks, you feel the point is perhaps being laboured slightly.

In general, the play is performed in a bold, broad, clear fashion, and those who are less familiar with the plot will find it easy to follow. Sometimes, however, individual lines or words are rather over-egged, particularly when it’s a line they’re trying to get a laugh out of. This makes certain scenes, such as the gravedigger scene, slightly annoying.

Gary Shelford is energetic and forceful as Hamlet, nipping round the stage like a mountain goat so we all get to hear his speeches. My favourite performance, however, was Simon Poole playing Claudius. He’s great, giving the role a cool, creepy charm that reminded me, weirdly, of Richard Madeley.

Going to open-air Shakespeare in Oxford is always fun, and it doesn’t have to be one of the comedies in a college garden. The setting, atmosphere, and choice of play make this a very different experience, though it’s essentially still enjoyable, accessible Shakespeare.
Ben June 6, 2007
The most famous play by the most famous playwright will inevitably be problematic to produce, if only for its sheer quantity of aphorisms. Hamlet is a play concerned with methods and solutions and Gari Jones should not be criticised for endeavouring to be innovative, creative and interpretive, for Hamlet demands to be re-envisaged and ‘made afresh’.

However, this production comes across as a laboured effort at pertaining to be ‘postmodern’. It relies on the use of video footage and modern music, which occasionally works. Unfortunately, these elements do not combine to create an effective aesthetic. Instead, the play is left as a series of parts, some musical, some theatrical and some other…

The use of video and music detracted from (rather than enhanced) the tragic elements of this play: drama, action, subterfuge and emotion were all lacking. Casting, direction and timing seemed somewhat careless and any sense of characterisation was limited at best.

As a piece of theatre this modern, bold Hamlet does not work, but will inevitably provide much to be debated and questioned throughout the summer season.
Lita Doolan June 3, 2007
Of the many themes on offer from this stylish monochrome production of Shakespeare’s best, the one that moves me most is mortality and the dilemma of how one's allotted time is spent. This climaxes in Hamlet, centre stage, pointing a gun at his head asking ‘To be, or not to be’. Hamlet, one of the most frequently performed plays in the English language, requires a freshness that Gari Jones’ contemporary interpretation brings to these oft-quoted speeches. The fresh summer feel of open air theatre offers a great connection with Shakespeare’s line ‘this most excellent canopy, the air, look you.’ Live footage from handheld camcorders used by the cast to film each other is shown on small screens to illustrate the line ‘What a piece of work is man!’ and also echo the sinister presence of a ghost. The venue of Oxford’s old gaol is spot on for the line ‘To me this is a prison,’ and offers a stunning backdrop to Hamlet’s address to his deceased old friend the court jester, ‘poor Yorrick’. Hamlet is literal when he points to the old prison A-wing with references to the many who have died here. The graveyard scene sets the suspense for a thrilling culmination of Hamlet’s anger to his father’s murder at the hands of his uncle, who has swiftly married Queen Gertrude, Hamlet’s mother. Newly crowned King Claudius (Simon Poole) and his new bride Gertrude (Portia Booroff) make a sexy upwardly-mobile charismatic older couple.

Gari Jones introduces innovative devised theatre at every turn. The play within a play that Hamlet puts on to effect guilt in his murderous step-dad/uncle is done with paper bag masks, made on stage, over the protaganist’s faces. This production is played in the round with the cast continually strolling around the wider auditorium creating an interactive experience. Pepe Balderama (Laertes) brings his unique brand of humour to the proceedings. Fans of distinctive Actor/Musician Gavin Molloy will welcome his second season at the Castle and enjoy his on stage ensemble work, driving this epic story forward, with Alex Beckett. Richard Rycroft plays humorous windbag Polonius who injects fatherly wisdom into the lines; ‘To thine own self be true,’ ‘Neither a borrower nor a lender be’ and ‘brevity is the soul of wit.’ His murder at the hands of Gary Shelford’s often subtle and understated Hamlet sets off a thrilling trail of destruction. Shelford’s brings sensitivity to the role as well as the full force of nature required to convince an audience of Shakespeare’s great hero. A dreadlocked Gothic-styled Ophelia (Amanda Haberland) is so in touch with her emotions there is a split second where you can see Hamlet’s rejection break her heart. Through her character, Haberland displays the effect of the negative values towards women held by Shakespearean England. It is painful to watch the effect Hamlet’s put downs such as ‘Frailty, thy name is woman’ have on her. The action is packed so densely into the second half with breathtaking swordsmanship from rapier-brandishing, revenge-seeking Hamlet and Laertes (Pepe Balderrama), the evening passes too soon.

The cast wear chic black and white in Sara Perks’ clever and sophisticated design. Perks gives us a student Hamlet with cool specs, a shaved head and elegant military style jacket. Hamlet’s student friends with striped drainpipes and bowler hats echo this modern kitsch Country Gentry look. On the surface black and white is just another on-trend fashion but later as the evening draws in it is clear Perks is giving us the age old ritual of mourning in her design. We will shuffle off this mortal coil no matter how many fashion trends we cling to! The pop music used in the show serves to enhance the fine speeches, opening with The Killers lyrics, ‘We hope you enjoy your stay’. But all too soon the cast are returning to the back of the stage, still like marionettes ready to be played another day. ‘Welcome to the Black Parade’, the Summer starts here!
Shakespeare’s ‘The Tragedy of Hamlet, Prince of Denmark’ runs to some 4000 lines and, uncut, plays in around four hours. Creation Theatre’s ‘Hamlet’ plays in approximately two hours; unless the cast are accomplished speed readers, something must have been thrown away. And indeed it has. Subtlety and richness have been sacrificed for impact and clarity. What remains is essentially monochrome. In the editing there is sometimes a sense that the director lacked confidence in the original. Given that the work has enjoyed some success over the years this was perhaps a little unwise. Happily Creation’s able cast do much to make up for the shredded text.

Amanda Haberland is a poignant, bewildered Ophelia. It is a pity that her descent into madness was not furnished with a more radical costume change than just smeared eyeshadow. It is also a pity, that in a production that puts so much emphasis on music, that she, and indeed first gravedigger, were robbed of their songs. Simon Poole‘s decadent Claudius was the almost perfect gangster, debauched, sleek, sharp, an able ‘fixer’, but not quite able to fix his own conscience. Portia Booroff was a sensual Gertrude who, as a sister-in-law, might well have engendered fratricide in the ruthless, and, as mother, perturbed the fragile mind of her volatile son. Gavin Molloy’s Horatio was all that our student hero’s friend should be: charming, loyal, supportive, and concerned. He does unfortunately labour under the serious handicap of headgear, which if it does not display the rubric ‘Kiss me Quick’, might have. He should ditch it immediately. Pepe Balderama’s Laerties (also hideously disguised as Rosencrantz, or was it Guildenstern? Of which more anon.) was powerfully effective in this most difficult, raging part.

Critics of Richard Burton’s Hamlet could not understand why a man of such power and resource should have any difficulty is resolving the only slightly tricky problem of executing his father’s murderer. Similarly, Gary Shelfords’s Hamlet is a super bloke, obviously a tower of strength in the rugger club and probably opens for his county; a real sympathetic action hero. Shorn of so many of his words what he lacks is depth and complexity, the sense of inner chaos and disquiet. However, his exchanges with Horatio and Ophelia are deeply moving; ultimately we do very much care that he has found himself.

Richard Rycroft’s Polonius was beautifully managed. His baffled concern for his wayward children was a wonderfully sensitive and original interpretation. Alex Beckett - as Gravedigger and Rosencrantz (or was it Guildenstern) was denied much of his text. That a director, intent as I believe, on getting laughs, can cut the” Upon what ground – Why here in a Denmark” lines, makes me think he should perhaps consider other employment. R. and G, the ‘terrible twins’ appeared to have strayed in from a ‘Jules’ & ‘Sandy’ Round the Horn production of Dr Faustus, and, in their grotesque costumes, were severely out of key with the rest of the production

The music and sound effects were apt, and the ghost most effectively handled. The victims amongst the cast should be careful about the way they die. On the evening I attended someone came very close to getting a disastrous laugh. Perhaps a little blud might help? I really wished to be affronted by this ‘Hamlet Lite’. However I found I wasn’t. If you don’t go and see it, you will have missed a treat.
Ticklepin 11 Jun 2007
Review this 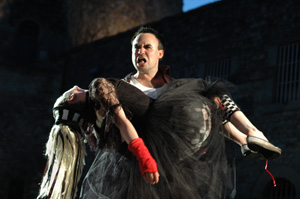 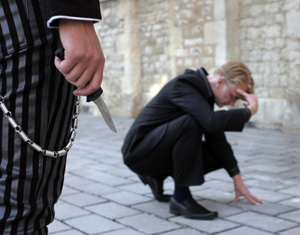