Reworking of Greek classic Oresteia, set in the South African Truth and Reconciliation Commission. Mother and daughter, victim and perpetrator face up to one another. With a chorus of Xhosa tribeswomen.
Oxford Playhouse, Tue June 12th - Sat June 16th 2007 & Tue April 1st - Sat April 5th 2008
Lita Doolan June 13, 2007
Yael Farber cleverly adapts the Oresteia trilogy to tell the story behind the painful healing process experienced by the survivors of post-Apartheid South Africa, centring around the dynamics of the Truth and Reconciliation Commission. The structure of the Greek plays offers a satisfying context from which to see the evolution of a judicial system that replaces the understandable yearning for the ‘an eye for an eye’ style of revenge. The witnesses are the Greek Chorus, played exquisitely by The Ngqoko Cultural Group, from the town of Lady Frere, who exert a presence from the moment the audience enters the space. These blanket-wearing beat-dancing elders perform indigenous South African Music with string and mouth bows in the tradition of the Xhosa communities. The bird's eye view from the raked on-stage seating in the round is engulfing as the action switches from blood-strewn entrails, made by violent actions, to the formal Commission meeting hall where a case is being staged in such a way that the audience feels like witnesses. A black South African daughter (Elektra) is reporting mistreatment such as strangulation, cigarette burns and drowning, which the audience witnesses, at the hands of her white South African mother (Klytemnestra). ‘You have made a child of me through fear’ accuses Elektra, scintillatingly played by Jabulile Tshabalala, of her hard-bitten chain-smoking drunken mum, Klytemnestra, a role performed with vigorous energy by Dorothy Ann Gould. Whilst a metaphor for Apartheid is established in this relationship, Farber’s direction ensures it is always a real family that is portrayed with genuine dysfunctions, for example the mother is plagued by the fact she loves her son, the exiled Orestes, much more than her daughter.

It is reassuring that Farber still sees victim and perpetrator as a family unit and both are in agreement that neither group wants a ‘history without a future’ but one problem remains, as Elektra puts it ‘how can we move on until the debt is paid?’ Many insights are offered as to how the perpetrators feel, as Klytemnestra reveals ‘we are still only here by grace alone’. Justifying her actions she confronts Elektra with the wrongdoings of Agamemnon, the husband Klytemnestra murdered. Elektra interprets the offering of her sister Iphigenia’s life at the hands of Agamemnon as the ‘price of war’. Civil war scars one and all as Klytemnestra’s mental state deteriorates and she waits for the consequences of her actions to literally knock on the door. Heralded by the reverberation of a big drum a stranger offers her the ashes of her son, Orestes. So clearly told, ‘Molora’ (or ‘Ash’) offers a great introduction to the Oresteia and a climactic ending approaches. As the cycle of revenge becomes overwhelming, can the strong axe-wielding Orestes (Sandile Matsheni) be moved to kill his own mother or can the very painful process of healing begin? The action is subdued only by the soft fall of ash from above. This visual effect is inescapably similar to the fine powder that fell for days in Downtown Manhattan after the bombings of September 11th . In this moment the company offers us the possibility of something beautiful occurring that is unconscious of the cruelty that has created it. Those warm hearts of The Ngqoko Cultural Group send us home with a song, reminding us that in South Africa, as well as in Greek tragedy, strong beliefs exist to break down any revenge cycle. In a show that gets standing ovations in South Africa and now Oxford there has to be a universal truth, and for me it is if we stop picking our scabs long enough then eventually they will heal. Watch this house rise again and the Farber Foundry at work!
Kathryn June 12, 2007
Europeans have watches, Africans have time, so the saying goes. A woman walks slowly across the stage, rolls up a piece of plastic, then starts the singing that will accompany the whole play. She is joined by 5 other women wrapped in traditional blankets, and a man, and these provide the chorus. The Playhouse has been transformed into a much smaller and more intimate in-the-round theatre: the seats are on three sides of the almost bare stage. There are two tables, each with a microphone, under the glare of neon lights and the outline of a grave. Two women sit and face each other, they start to give their evidence and the story unfolds.

Molora, which means ash, is based on the Greek tragedy of Klytemnestra and revolves round her relationship with her daughter Elektra and her son Orestes. The two women, played by Dorothy Ann Gould and Jabulile Tshabalala, dominate the stage throughout the play with their powerful performances and build up the difficult relationship which is at the heart of the drama. Elektra wants to avenge the death of her father, who was killed by Klytemnestra, and any softness at the beginning towards her mother turns to unremitting hate. Klytemnestra could be portrayed as just a monster and she is indeed dreadfully cruel, but Gould manages to make her a much more complex character and to capture her ambivalent attitude towards her children – part love, part hate, part fear. When Orestes appears later in the play, he has the choice of avenging his father’s death, as his sister wishes him to do, or stopping the cycle of violence.

As we have come to expect from Farber Foundry productions, singing and dancing is integral to the plot: the women who make up the Greek chorus give a deep rhythm to the play and the prowling movements of Sandile Matsheni as Orestes provide a menace which is truly frightening.

The play is set loosely in the atmosphere of the Truth and Reconciliation Commission: a time in South Africa in the mid 1990s when perpetrators of crimes under apartheid were given the chance to come clean and their victims were given the chance to know the truth. For many people on both sides, this was a huge relief. There is an ancient African philosophy that seeks unity and reconciliation rather than revenge and punishment; this play, in the end, is the embodiment of that philosophy.
The story outline has wonderfully been written by Kathryn, so all I would like to add is:

Molora is the most raw and beautiful thing I have ever seen...
San 12 Jun 2007
Review this 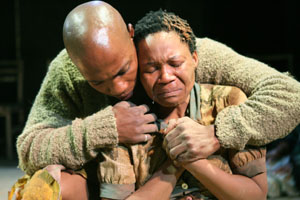 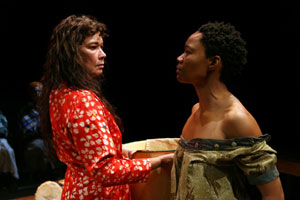