The usual shenanigans, directed by Peter Duncan, starring Simon Green as Widow Twankey.
Oxford Playhouse, Fri 7th December 2007 - Sun January 13th 2008
Lita Doolan December 5, 2007
Producer Tish Francis presents another home grown pantomime hit, as life-enhancing as the Oriental culture the scenery depicts, after all, ‘Confucius say man who keep feet on ground… has trouble putting pants on!’ If you’re in need of laughter, ‘nothing works faster than Aladdin!’ Ebay, Northern Rock and the Oxford Espress are mentioned as the non-stop jokes tickle young and old alike. One of the nation’s favourite Blue Peter presenters directed, co-wrote (with Chris Jordan) and makes an on-screen appearance as the voice of Spirit of Zykanum to reveal to evil Abanazar the word that opens a cave that holds a magic lamp. But it is only Aladdin, the son of a poor washerwoman Widow Twankey, who knows exactly where this secret cave is.

A hard-working team of children shine bright in the chorus, all ‘Busy Doing Nothing’ in Twankey’s Laundry. The hilarious chaos builds up to a side-splitting Olympic preview, ‘If I Was Not in Pantomime’, accompanied by a versatile live band. ‘Uncle’ Darren Reeves as musical director leads the audience into a singsong, ‘I’m a Lonely Little Petunia’. For school children there is a gentle nod to citizenship. Aladdin’s brother Wishie Washie (Howard Gossington) shares his sweets and gets children young and old to play his ‘ok alright’ game which makes us truly friends. The audience participation is oodles of fun and as is traditional in pantomime the audience plays an active part in the story telling. The promise of riches from Aladdin’s ‘long lost Uncle’ Abanazar, played by multi-talented Miles Western, inspires the hero to cross the UV lit desert by Magic Carpet to Arabia to find the cave. Widow Tabitha Twankey fluffs, folds and elaborates on their hard times; her husband was ‘like a lava lamp, nice to look at but not very bright!’ Her only hope of an easier life is the laundry being awarded the ‘royal seal of approval’. This potential change of fortunes is announced by the energetic slap-stick police officers Ping and Pong (Josh Capper and Craig Painting).

When Aladdin returns with the magic lamp the Emperor is more open-minded about the love that blooms between Aladdin (the hunky Michael Steedon) and his daughter Princess So-Shi. Their love blossoms as the crystal clear resonant soprano voice of the Princess (Charlotte Warren) sings. ‘Once You Lose Your Heart’ is a solo, spine-tinglingly lit by a single spot light, a part of Ashley Bale’s stupendous lighting design which has the audience bathed in more disco lights than Studio 54. But before the opulently dressed Emperor (Michael Remick) will consent to a wedding he has to meet the in-laws! As Aladdin leaves the Princess to look after his magic lamp a peddler enters the Palace offering new lamps for old. So-Shi is wrong footed and ends up in chains in Abanazar’s Dungeon. When Widow Twankey and the gang catch up with the beleaguered Princess it seems only a big box illusion will free her but only if the entire audience helps. Genie of the Ring (sparkling Lizzi Franklin) leads the spell aided by the Genie of the Lamp, played by Fraser Collins whose amazing vocal ability excels in the a cappella ‘Wonderful World’. Collins performs a roof-raising Disco medley which Tara Wilkinson choreographs with strong lifts and dynamite moves all brilliantly lead by dance captain Emily Whitehead. However, my Christmas moment is that audible sigh of relief when Simon Green takes to the stage as Widow Twankey and breaks into his first number ‘Sloshing in the Washing’. It can be delayed no more, Christmas is finally here.
Matt Bright December 3, 2007
The tremendous energy that’s clearly been put into Peter Duncan’s second pantomime production for the Oxford Playhouse, Aladdin – artistically and technically – is its greatest strength and its greatest weakness.

It’s definitely a technical triumph. For a show so hastily and intensively rehearsed very little goes wrong – even in pieces of slapstick where items are dropped and/or flung about the stage the choreography is impeccable. It hits all the right traditional buttons, too – Simon Green’s Widow Twanky, in his selection of increasingly awful frocks, was compellingly blowsy. The camp villainy of Miles Western’s Abanazer as he worked the audience expertly for boos and hisses was a joyful sight. Against these towering performances Michael Steedon, playing it straight and wide-eyed as Aladdin, seemed rather weedy – although this was not helped by a sound system that had him drowning in the orchestra during his musical numbers.

This is a busy, breathless show, cramming corny jokes, pop-culture and slightly forced local references and mild sauciness into every moment. Even though it’s quite long, you never seem to be more than five or ten minutes away from a big song and dance number or a comic set piece, followed by an elaborate change of scenery. Things get particularly noisy when the genie, played by the (ahem) well-built Frazer Collins as a smooth-talking disco king in an alarmingly tight lycra jumpsuit, arrives and conjures up rousing choruses of 70s hits from everyone onstage.

It’s all, undeniably, a whole lot of fun. However, it so rarely slows down that when it does things start to feel uncomfortable. Two slow love-ballads performed by Aladdin and the Princess are perfunctory, truncated affairs. An odd skit on the Olympics is such a masterpiece of comic choreography that you almost don’t notice it’s not really taking the story anywhere. A scene involving a single, rather elderly magic trick in the second half finds itself both over-populated and over-extended, with none of the cast quite knowing what to do with themselves. That failure to convincingly change pace makes the whole thing occasionally seem a little exhausting and one-note.

This is not to say that audiences won’t have a terrific time. Certainly the very young will be enchanted by the continual riot of colour and activity on stage. Older children will laugh at the jokes, gasp at the stunts, but might feel that they expected a little more narrative amid the chaos.
My son (aged 5) and I had a fantastic time. Michael Steedon was almost too scary, Fraser Collins was the funkiest genie ever and Simon Green just about stole the show.
Lisa 2 Jan 2008

I am 39 years old and my friend is 40. She suggested that we watch a panto over Christmas for a bit of a giggle. I agreed 'for a laugh' - but secretly I really wanted to see a panto (the last one I watched was in...1976, I think?. So I booked the tickets to watch the matinee show on Saturday 15th of December. We felt a bit silly going to our seats in the front stalls with all the Mums, Dads, Grandparents and, of course, children.

But that sense of embarrassment soon lifted with the curtain and the dimming of the lights and the appearance of Miles Western's character, Abanazar. Miles set a quality of acting that did not end with him. As the show progressed, and I heard myself and my friend laughing at the slapstick humor and wowing at the magic and raw reality of the magnificent stage lights and colours, the standard of acting from all of the cast was outstanding - they didn't put a foot wrong. I absolutely loved every minute of it. Peter Duncan [producer] used (and I googled them) highly trained professional actors, not some reality TV fly-by-night celebrities to bring in the crowds.This meant that the performance we watched in the packed theatre was as fresh as the pantomime's opening night performance.

The cast were great actors, dancers and singers. Simon Green's Widow Twanky was superb.(Green's voice would not have needed a mic - he would have been fine if there had been a power cut!) He had the audience eating out of his hand. The guys who played the emperor's hapless police worked so hard, they should be on TV. And the lead roles couldn't have been more perfect. This has sparked my enthusiasm to go out more and watch live performances at the theatre. When the standard is this high, you can't beat it!.

Shaun 16 Dec 2007
Aladdin:
A magical story of rags to riches,
with laughter from the beginning till the end with Wishee-Washee [Howard Gossington] chucking to the audience an assortment of his favourite sweets,
Princess So-Shi [Charlotte Warren] with her delightful voice carrying sound through the Playhouse,
Aladdin [Michael Steedon] whose facial expressions were brilliant,
Widow Twankey [Simon Green] with non-stop jokes,
and Abanazar [Miles Western] being booed and hissed the whole way through,
Ping and Pong [Josh Capper and Craig Painting] with their hilarious kid's bikes,
and the Genie [Fraser Collins] with his boogie and Jackson 5 costume and his "put a sock in it" joke,
Made everything come to light,
A magical tale for all families,
A must-see event!
Mossie 15 Dec 2007
Review this 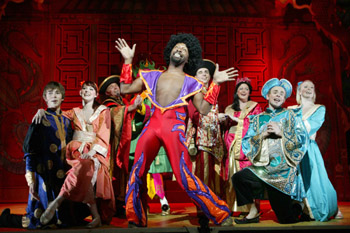 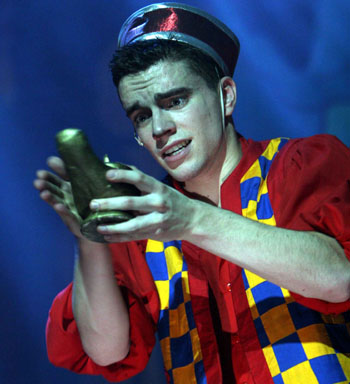 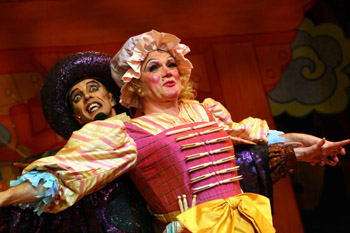 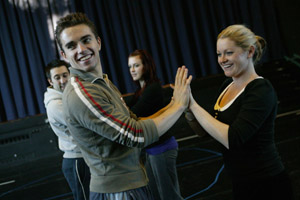 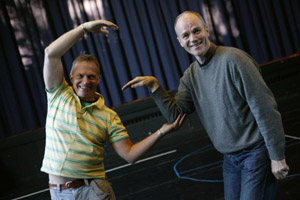 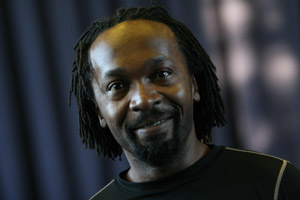 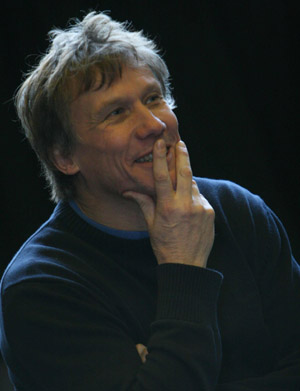