Tales from the Brothers Grimm

Hansel and Gretel, Snow White, Little Red Riding Hood and Rumpelstiltskin.
BMW Group Plant, Oxford. November 21st 2007 - Jan 12 2008.
Lita Doolan January 7, 2008
Cocoon-like houses painted on lanterns that swing in the gnarly branches of the surrounding set, the audience thaws out with rugs, mulled wine and a hospitable welcome from Front of House manager Jacky Sadones. Whilst wintery gales blow outside the Mirror Tent an ensemble cast, directed by the instinctive creativity of Gari Jones, dramatise several tales from the hundreds written by Jacob and Wilhelm Grimm. Written to champion the German language, which was the sole unifying link between Napoleonic German states of the early 19th century, the stories are those of the working classes, told through their aristocratic masters to the academic brothers. These traditional stories are faithfully told in a contemporary style through Jones’ tight script and Lucy Wilkinson’s designs.

Costumes are downtown Tirolean with thick tights, chunky furry boots and short kicky skirts. Eilidh McCormick plays a bewitching Marlene with punk pink hair whilst the huntsman patrolling this wood is the hilarious Richard Kidd who sports a black leather trilby and jacket and pops to Justin Timberlake. The eccentric humour of Alex Beckett as the Mirror reminds the evil queen that, ‘beauty is a light inside the heart’. This is a omnipresent message as Star Girl who marks the beginning and ending of the show demonstrates. Curiosity has taken her off the beaten track, deeper into the woods. Through kindness she has given away her bread and clothes to children more needy. She digs into the earth to find a key next to an iron chest whilst the audience waits to see if her generous spirit is rewarded.

A singing snow-white bird puppet flies in and out of the tales linking them up as does Hansel and the adorable Gretel’s (Claire Andreadis) journey into the forest where they entertain each other with tales. Interweaving the stories highlights recurring themes that relate back to the Grimm family’s dramatic shift from living in a rural idyll to the reduced circumstances of urban life brought about by the father’s death. Matriarchs get a raw deal in the tales. ‘As long as you keep everything immaculate and pristine you can stay’, say the detailed puppet Dwarves to a bewildered Snow White. Jessica Sedler wears faded flowers and garish nets as the old woman living in the gingerbread house built to lure children off their path and is evocative of the strong harmful potential of women in Paula Rego’s paintings. She feeds the children crepes. Whilst this is a gourmet treat the audience can order in the interval, most of the food in the tales is cursed with characters such as Thumbelina working a passage through an animal’s digestive tract.

No one is scared of Tim Crowther’s fabulous rock star wolf as the audience knows the scheming wolf is the victim of the plot. The children are awesomely fearless when Death takes the stage to turn the set to hell with the biggest flames being the ones for children. Symbols testify to the bravery of children. Flowers at the edge of the circular stage in the round are dreams. The wolf tempts Red Cape away from the path as she circles the tent plucking the prettiest blooms. These children know ultimately they must leave the comfort of the path. Adults too should be nudged off the well-worn ring road to BMW group plant if only to enjoy a favourite tale such as the romping Rumpelstiltskin and watch the Juniper tree explode. Creation Theatre makes gold out of straw once more.
Susie Cogan December 7, 2007
Classic fairytales, presented in the enchanting atmosphere of the antique Mirror Tent by a theatre company that specialises in the mystic and magical: what could be a cosier, more charming way to spend a winter evening? Yet while Creation Theatre’s Tales from the Brothers Grimm brings a welcome injection of seasonal warmth to the cold nights, fairytales, of course, don’t always live up to the name. A far cry from the sanitized, two-dimensional stories (Good giving Evil a firm punch in the face) that I grew up with, this is a return to the darker, older, eerie and ambiguous versions of the tales we thought we knew so well. Here children are cooked and eaten, the dead rise, and the heroes and heroines are not always entirely nice.

The sparkling scene is set with lanterns representing a cluster of cottages on the edge of the woods, evoking a sense of the small rural communities where these folk tales might originally have been told around the fireside, and also suggesting the individual dwellings where each tale begins: a woodcutter’s cottage, a miller’s house; a king’s castle. Familiar characters; Little Red Riding Hood, Hansel and Gretel, Rumplestiltskin and Snow White, act out their stories, tell each other’s stories and occasionally meet unexpectedly within and in between stories. It feels a bit like watching an actors’ workshop, or children playing make-believe, switching characters by slipping on a cloak or a hat, cradling a makeshift infant made out of a bundled tablecloth, announcing firmly who they are and occasionally wresting control of the story from each other.

This is an irreverently humorous show, offering dancing corpses, gentle flirtation, and a trio of travellers pinching the moon like drunken students with a Belisha beacon. On the odd occasion where a joke seemed to me to have missed its mark, there came in the slight pause afterwards, the delighted sound of the children in the audience laughing. The moments where the storytellers stepped out of character worked well, I thought, when they did so in the guise of slightly petulant kids, but seemed a little self-conscious when done as slightly petulant actors. The general emphasis, though, on the fluidity and possibilities of storytelling is well maintained, especially given that the cast were one storyteller short on this occasion. They remained energetic throughout and always seemed to be enjoying themselves, and their enthusiasm communicated itself rapidly to the audience over an evening of magical amusement.
A breathless romp through the pages of Grimms Fairy Tales - All the well known characters are there, and some not so well known. Little Red Riding Hood, Snow White, the lazy miller's daughter, Rapunzel, Gretel and her brother Hansel, the Big Bad Wolf, Rumpelstiltskin, the Miller, kings and princes, ghosts and devils, the Moon and the Mandrake. We are hurled through the enchanted forest with scarcely a moment to catch a breath - the seven Creation Theatre actors playing a cast of what seems like hundreds! And all woven together through one binding story - the Golden Key. It's a magical evening. Children are enchanted and enthralled, grown ups reminded of the joy of imagination. And the mirror tent is quite simply stunning. Go and have an adventure!
MS 27 Nov 2007
Review this 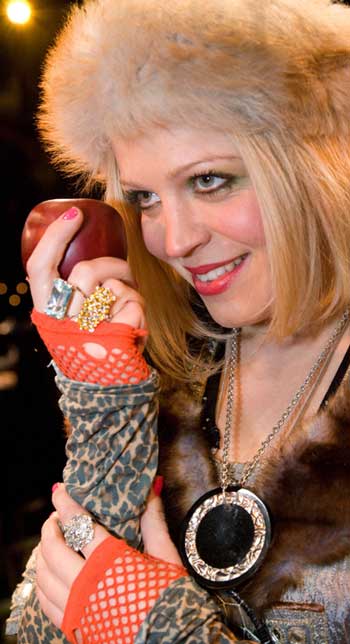 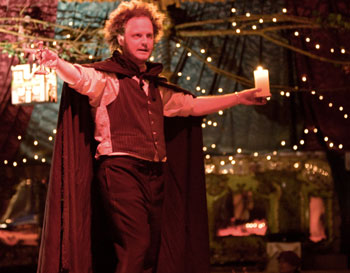