Live Opera / Ballet at the Phoenix

Live transmissions from the New York Met and Royal Opera House.
£25 (conc £20, members £17.50). Season Tickets - book any 4 and save £10 (any 8 and save £20.)
Simon Tavener February 12, 2008
Since the autumn of 2006, the Met (as it is affectionately known) has been beaming High Definition broadcasts of live performances to cinemas round the world. This, in many ways, is the logical extension of the audio broadcasts that I have been listening to on Radio 3 over the years.

Television screenings of opera have been going on for decades. Large screen showings have grown in popularity since they were first introduced. So why not live hi-def broadcasts? Why not, indeed!

From the trailers I was shown at the Phoenix today, it is clear that the quality of the visuals is outstanding. You would expect nothing less from HD TV. The sound is also excellent – both for the orchestra and, more importantly, the singers.

Does it match going to see an opera live? I have to answer no. It is a very different beast. Firstly, you are always aware that you are in a different environment. You can’t broadcast the atmosphere of being in a theatre – the crackle in the air, the anticipation. Also from a visual point of view, you are only allowed to see what the broadcast director wants you to see. In an opera house, you can allow your eyes to wander round the stage, to take in things that catch your eye, to see the reactions of others on stage (or in the auditorium).

I also found the subtitles rather a distraction. In an opera house, the text is often presented as surtitles – so you have to make a more conscious effort to look up to take them in. At the Met, I believe, there are screens in the back of the seat in front of you for the texts – again allowing you to choose to follow them or not. However for these broadcasts they are there – a threatening white text block distracting the eye. I know not everyone is fluent in all the languages of opera (nor is the diction of every singer good enough for the words to be fully comprehensible round the globe) – but I did find them distracting.

One of the benefits of HD broadcasts is the clarity of the image. Unfortunately, this has a downside – particularly for opera singers. All too often, they are some years older than the teenage lovers they are portraying. Also singing can sometimes force the mouth into some, shall we say, unfortunate positions. In the theatre, this doesn’t matter – there is sufficient distance between audience and performer for disbelief to be suspended. Bring the singer into a tight close-up and every wrinkle becomes all too noticeable. In many ways, this doesn’t matter. We are there for the glory of the music and the emotional pull of the story. However when we go into a cinema, we are used to seeing a polished cinematic look. You can’t get that with a live opera broadcast.

The question you have to ask is – is it worth the price of admission?

On the plus side, you have glorious music, pre-eminent singers, conductors, stage directors. You have a chance to participate in a global event. On the down side – you aren’t really there. It is always clear you are watching a broadcast. And the flaws that I have already outlined. At £25 it's considerably more than for a usual night in the cinema; considerably less than for a night at the opera.

Given that this Saturday’s broadcast of Puccini’s Manon Lescaut is sold out – there is an audience for this in Oxford. Forthcoming broadcasts include Peter Grimes, Tristan und Isolde and La Fille Du Regiment – some great operas.

Would I go? I have to say that I am uncertain. These broadcasts are finding their way onto DVD so perhaps I might wait and buy one for £20 and then watch it at my leisure on a smaller screen. This, I know, is missing the point of the live experience and the whole cinematic presentation. Or I might spend a similar sum to see Glyndebourne or Welsh National Opera when next they come to the New Theatre (though I would have to sit quite a way back for that sort of money).

It is certainly a worthwhile endeavour on the part of the Met and one that does bring great performances to a huge new audience. One day, that might well include me.
Having seen La Rondine last night, with subtitles, I disagree with Simon Tavener's remarks about these being distracting. I could not see much difference between these and surtitles and they certainly did not detract from the performance at all.
mm 11 Jan 2009
Went to see Don Giovanni streamed live from the Royal Opera House, and I think it was definitely worth it. But: I love that particular opera; it was a fabulous production; and I have a friend who's a Friend of the Phoenix, who could get us slightly cheaper tickets. I think it is worth the price of admission only if there's a production you really want to see but can't afford the time or the money to get to it in London (or New York). But the previous reviewer's right: while the sound quality is lovely, and the camera work sensible, it's not quite as crackingly alive as being at the real thing. And we do get good opera companies coming in person to Oxford.

If the Royal Opera House really want to popularise opera (and they want to so much that they opened their season with an auditorium full of opera virgins who'd won the chance to come via the Sun newspaper), they need to knock another tenner off the cinema ticket price.

Having said which, I'm very glad I got to see this production, and I wouldn't otherwise have been able to. Simon Keenlyside brought a vigour and panache to the title role that I haven't seen for a long time (the first Don Giovanni I've seen agile enough to climb up the side of the stage on a rope), and while all the voices were splendid, Joyce DiDonato as Donna Elvira and Miah Persson as Zerlina were really quite superb. Robert Gleadow had a lovely animal glower as Masetto, and everyone had fabulous cascades of hair and was much better-looking than the opera stars of twenty years ago. Childish, I know, but the looks really do help with the story.

Things went a little strange in the last (dinner) scene: if you're going to have the Don go all bestial you need to build up to it gradually in a Dorian Gray picture kind of way. Otherwise if he suddenly removes his swashbuckling velvet cloak and starts swaggering about in shorts, it's a bit too abrupt. And the Commendatore's statue was a strange non-humanoid basket-work affair that was rather hard to get your head round. But the set was otherwise a pleasingly adaptable affair of vast curving walls, which shifted to suggest different aspects of buildings and scenes in a satisfyingly efficient way.

But it was the cast and the music that really made the difference. You get less bang for almost the same number of bucks as you would spend on a real performance, but if the cast are as good as this, or if you can't get in to the real thing for whatever reason, it becomes worthwhile.
LovePuppet 8 Sep 2008
Review this 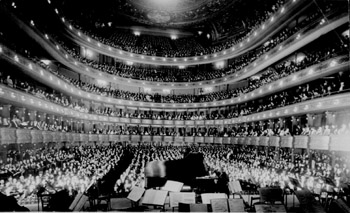