Series of lectures on religion and human rights
Oxford Amnesty Lectures 2008. Proceeds to Amnesty International.
Joseph Kennedy February 22, 2008
Debate: Freedom of Belief, Freedom From Belief - Religion and Rights.
Holywell Music Room, Thu 21st February 2008.
Five participants, each with their own view on the relationship between religion and human rights spoke at the Holywell Music Room on Thursday to round-off this year’s series of Amnesty Lectures.
Participants as diverse as a young anthropologist, the Bishop of Oxford, and major figures from what we might term the mass of non-religious public intellectuals including A. C. Grayling met to discuss the matter of religious freedom, and the freedom to believe what we will.

Emma Cohen, the anthropologist, whose major work to date has been on the subject of spiritual possession, sought to establish that as the meaning of the term ‘religion’ is so diverse, attempting to understand what faiths understand by the term alone can be a losing battle.

Professor Anthony Grayling asked us as an audience to make sure that we maintained in our minds the separation between atheism, humanism, and secularism. England, he maintained, is a fundamentally unsecular society due to the continued presence of the bishops in the House of Lords, and public funding for faith schools. With just three percent of the population regularly attending Church of England services, Grayling argued, there can be no defense for twenty-six seats for bishops in the upper house of parliament, nor can there be an argument for the funding of faith schools while groups that have much more influence in the ‘town square’ of civil society are funded from methods other than the tax base. The funding of any group, he maintained, must be proportionate to its societal footprint.

Imam Monawar Hussain, Muslim tutor at Eton College, demonstrated that the very openness of Islam to conversion and apostasy should mean that it is a faith open to the expression of religious freedom.

For the Rt. Rev. John Pritchard, Bishop of Oxford, religious freedom is an indivisible human right which can only be enjoyed by all of the population, and all religions, or none of them; without this, it cannot exist.

Andrew Brown, former religious affairs correspondent for The Independent, pointed out in stark terms the potential for human rights abuses that can be linked to atheistic beliefs. Freedom of religion for Brown rests in the fact that adherence to any religion, or to none, should be voluntary. The value of ‘sacredness’, he went on to argue, is a social reality, best understood by examining what numerical values we might add to chess pieces in order to understand their importance in the game. The King might be assigned a value a thousand times greater than the pawn, he contends, but it is still only a piece of wood or ivory when seen outside of the context of the game.

The evening’s great benefit was that it showed many diverse paths to integrating religion and human rights, all of which stressed that the paramount path to ensuring this could be nothing other than ensuring religious freedom and freedom of religion. The question and answer session helped to bring together many of the positions of the participants and made the debate remarkably edifying to attend.
The sixth lecture in the annual Amnesty series was both thought provoking and timely, given the recent controversy over the Archbishop of Canterbury’s remarks on Sharia.

Dr. Mouffe, Professor of Political Theory at the University of Westminster in London, began by contextualising her argument with some of the contemporary discourse on human rights, including the notion that they are not universal, but rather a western and therefore liberal democratic concept. She refuted this argument, instead suggesting that the notion of human rights could be reformulated to accommodate pluralism, using cultural interpretation of dignity as its basis. She argued that other cultures may not put such value on autonomy as liberal democracies, but this could be accommodated by according rights to communities, or family groups. She stated that in order for human rights as we currently interpret them to be universal, western culture would have to become universal, however re-conceptualising human rights in a pluralist context would avoid this. She hypothesised that within a state, pluralist interpretations of human rights was not possible, but between states it was.

In response to Dr. Mouffe’s presentation, Dr Stuart White, Oxford University Lecturer in Politics, argued that the invention of human rights as currently interpreted by western culture did not preclude its usefulness for application in others. He refuted Mouffe’s assertion that human rights weren’t necessarily linked to autonomy, instead arguing that the role of human rights was to protect the individual against fallibility of family and religion. White weighed in on the recent Sharia debate, stating that a shared framework (e.g. the state) does not preclude multiple structures within it from addressing cultural pluralism, provided it was within the boundaries of human rights.

It was a deeply thought provoking debate, with a weight of academic thought and political theory behind it. Despite the potentially daunting subject matter, I found the lecture sufficiently accessible intellectually, thanks to a well thought out, clear argument by Dr. Mouffe. Equally, Dr. White was both thoughtful and pragmatic in his responses (the washing machine analogy was useful, though the flippant remark about the temperature of the room violating his human rights did raise some eyebrows).

The Amnesty Lecture series continues on the theme ‘Religion and rights’ with an upcoming lecture Pentecost: Learning the Language of Peace and a debate entitled Freedom of Belief, Freedom from Belief: Religion and Rights.
Kate Bottriell 14 Feb 2008
Review this 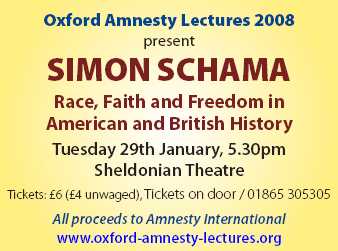 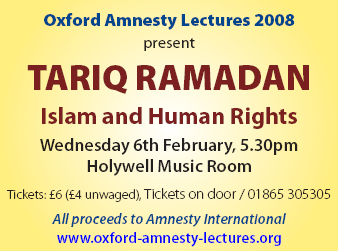 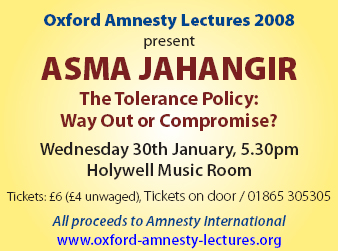 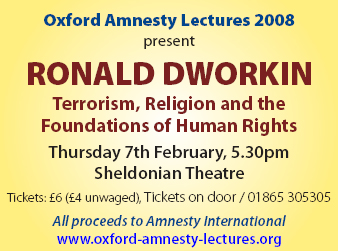 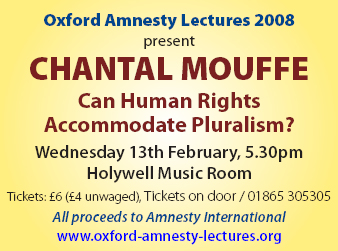 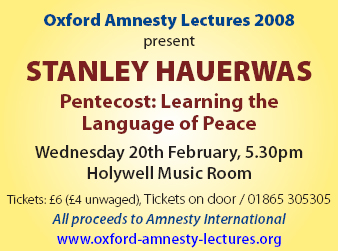