Monday 9th June was not a good evening to be either a comedian or audience member at the Cellar's Free Beer Show. The three comedians on display attempted to eek laughs from a laconic and heat-stricken crowd, but never really seemed to hit their stride. Compere Jack Whitehall showed some promise with his Russell Brand-a-like schtick and musings on contemporary culture. Moreover, although clearly terrified, he dealt relatively well with one of the most intense and unnerving hecklers I have ever seen at a comedy club, who walked to the front of the stage and demanded to be able to tell "just one joke". Said heckler was my personal highlight of the evening just for the sheer knuckle-biting awkwardness and the exasperated attempts of the organizers to deal with it (in light of this I suspect they may be tempted to rename the event The Free Prozac Show).

Support act Natalie Luurtsema met with an uninterested response from the crowd, which I felt was at points unjustified, given that she had some brave and potentially original material in her portfolio (alongside some less inspired gags). Lastly the headliner - Canadian comic Glenn Wool, premiering his Edinburgh Fringe Show - gave a lacklustre performance, consisting of underdeveloped sections from his new show which he proceeded to read from a notebook. The new material frequently meandered for too long without adequately paying off. However, the man clearly has talent as a performer and is a real stage presence, delivering his set with the energy and intensity of Jack Black. He too dealt well with another obnoxious, drunken heckler who was intent on talking over the majority of his set. Yet his ending comment, delivered with only a hint of irony: 'if you want more, pay more next time", basically summed up his approach to the evening, and smacked of sour grapes. Overall the event was a messy and slightly uneasy affair, but for a fiver (which includes a free drink), who's arguing? Well, there were a couple of people - but at least it kept them off the streets for an hour or two.

Lee Jones April 28, 2008
Bishop & Douch, and Carey Marks
The Cellar Bar, 28 April 2008
This was a very disappointing evening at the Free Beer Show. The less said about the opening act, Bishop and Douch, the better. Their sketch – a bizarre melange of quirky takes on Disney, Scooby Doo and Sesame Street (ripping off Avenue Q) – involved the sort of puerile antics that drunk students might film and put on YouTube, not the kind of act an audience would ever wish to pay to see. The show absolutely stank. They were lucky not to be booed off stage by the remarkably tolerant audience.

I’m almost loath to criticise Carey Marks because he did, after all, step in at very short notice for Rob Deering, who was meant to be the headline act, and made it clear he had only cobbled together an act in few hours. On the other hand, he did make an explicit choice to try out entirely raw material – essentially, almost stream-of-consciousness blurb from his 2008 diary coupled with a few digressions and jokes – in preparation for his show at this year’s Edinburgh Festival. If you choose to use a gig in such an instrumentalist way, without using material you know to have worked in the past, you have to expect a degree of disgruntlement.

Marks is unabashedly foul-mouthed and non-PC, which certainly won’t please everyone, but he is intelligent and witty with it. My sense is that with polished material he’d be quite funny, but what he had tonight had, at best, the air of a mildly amusing chat in a pub with someone with a good sense of humour – the odd good joke, quirky insight or sarcastic reflection, but nothing sustained or strung together, despite early glimmerings of narrative devices. Unsurprisingly the act needs more work than a single afternoon; as such, it was only sporadically funny. Probably the best thing tonight was fast-talking compere Nick Page who span amusing yarns about his disastrous career, criminal convictions and relationship disasters – certainly he had the best-polished material of the night, but he seemed all too aware of how the evening, as a whole, had flopped.
Gabrielle Brown January 22, 2008
Reginald D Hunter, Mon 21st January 2008
I first went to see Reginald D Hunter last April and found the experience utterly satisfying – I left the theatre blissfully disturbed: I had been made aware that I knew nothing and that nobody else does either – straight-up emancipation. He taught me that I must ‘guard my mind’ from the noise and prejudices of others…and all I had wanted from the evening was perhaps a hearty laugh and the odd chuckle.

Whereas Hunter last performed his set in Oxford to a near-vacant Playhouse, this time he took to the stage at a packed-out Cellar Bar; an altogether more gritty venue where regulars to the ‘Free Beer Show’ bring about an unpretentious energetic ambience (possibly helped by the free beer). The Show comprised three acts hosted by MC Rob Alderson whose fresh quick wit really engaged the audience and gave the evening a bouncing momentum.

Hunter was last to stage after two supporting comedians had suitably got the controversy out there, and, as Hunter put it himself, ‘removed the handcuffs’. Bounding onto stage with pig-tails, Hunter at once plays with your sense of perspective. He claims to have swapped bodies with a little girl and therefore warns that the material may be somewhat bizarre. Hunter continues to explore themes including rape, paedophilia and bestiality, in the guise of a small child, and while even the most liberal of us would find this unsettling, Hunter succeeds in revealing how narrow minded it would be if we allowed ourselves to become offended at only the mention of such taboo subjects. Instead we must explore, discuss and examine these issues from all angles. And this can, disquietingly, be hilarious.

Hunter shares with the audience his experience of being an American in Britain. Our culture is revealed to be as indecipherable as it is irregular, a different code for each county. What we consider to be traditional Hunter asserts to be unacceptable; an example being how the English without second thought frequently determine the Welsh to have a certain penchant for a particular four-legged woolly mammal. It’s not so much the common-held opinion that Hunter objects to, but more the way in which we’ve taken on this view, although often in jest, without second thought. Hunter, again, wants us to think; to take responsibility for our opinions.

At one point during the evening after he had ousted an especially controversial deliberation Hunter mumbled to himself as an aside, ‘make the truth funny Reggie, make the truth funny’. Does Hunter know the truth? Having described America as place where all people care about is Jesus, money and food, I would like to say yes. However, the truth is perhaps whatever you determine it to be, with the ‘you’ being the determining factor. The truth can only be found when you look at things objectively, free from the invasive assault of information, opinion and tradition that constantly penetrates and skewers our minds.

If Hunter’s message last April was that we must guard our minds, then last night it was that we must use our minds. Hilarious, disturbing and enlightening.
Al Pitcher brought his Idiot Wind tour to the cellar this evening with a manic, possibly even schizophrenic set. His performance was random, hilarious, high energy comedy - it seemed sometimes he’d completely wandered off track and suddenly bang, he was right back there with the zinger. His asides had their own asides and he occasionally stopped mid-sentence to poke fun at an audience member; despite the fact he was juggling a lot, he managed to keep almost everything in the air (though we never did get to hear what happened with the koalas with two willies, much to my disappointment).

The audience was a key part of his show, providing both the material and direction. When he wasn’t picking on the scouser, the computer programmer, the table of whispering girls, the American or the self-proclaimed rapist audience members, it was mostly willies or slightly borderline PC stuff – mentally handicapped people, old ladies hurting themselves, deaf people; the usual suspects as it were. I thought the testicle-stapling story was possibly a bit much, but there’s something for everyone I suppose. Of course, the obligatory facebook reference was tossed in, with rather bizarre hyena-like results from a few girls at the back…before he even got to the joke.

The audience definitely had an odd vibe at times, but he handled the crowd very well. Pitcher is clearly comfortable on stage, and boldly pressed on where other comedians would have faltered. He was barely distracted when he injured his knuckle on the low ceiling, damaged his ‘member’ with the mike cord, almost impaled himself with the mike stand, or when a few mobiles went off.

MC Rob Alderson warmed up the crowd with his usual fast paced delivery, self-deprecation and valiant attempts to engage the crowd in on-stage participation (they just weren’t having the matchmaking game though).

Al Pitcher continues his tour in Pontypridd, where he will no doubt leave a trail of split-sides and guffaws. The Free Beer Show is on every Monday at the Cellar.
Kate Bottriell 12 Feb 2008
Review this 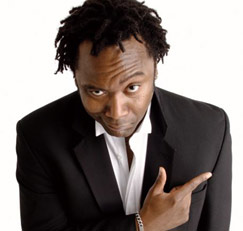