An underground artist whose canvas is your mind. Presenting direct misconceptions & delusions.
Helen Ward March 10, 2009
O'Reilly Theatre, Keble College, Mon March 9th 2009
One of the ironies of our 24x7 world is that whilst the absence of noise is the stuff of dreams, the sound of silence is the stuff of nightmares.

S1L3NC3 (not his real name), who performed for a fascinated, largely student, audience at Keble’s O’Reilly Theatre on Monday evening is both a person and an idea. A child magician who developed a teenage fascination with psychological trickery is now maturing into an accomplished performer of a particularly dark form of “psychic magic”.

The opening was uneven and a little wordy, but once the magic kicked in, S1L3NC3 was in his element and gave a confident performance, dealing well with the occasional prop failure.

Drawing on influences as disparate as Mary Shelley’s Frankenstein and neuro-linguistic programming, this was a thoughtfully constructed show which made effective use of simple props, audience participation and a flying cat. (Although it has to be said that the unconventional uses of razor blades and staplers, whilst effective, were not for the faint-hearted.)

Everything was as transparent as possible, everything was achieved through nothing more than trickery, observation and misdirection and yet…

This was S1L3NC3’s first theatrical outing. He hopes to present a show in a professional venue (possibly the Playhouse) next summer. Provided he spends the intervening time polishing his delivery and his showmanship, S1L3NC3’s technical abilities and originality suggest that this is a performer whose progress will be worth following over the next few years.
I think one of the best things about student theatre is the unfailingly packed and well-wishing audience – something that undoubtedly helps along the momentum of S1L3NC3 and his quirky sequence of ‘mind intrusion’ tricks.

At the opening I have to admit my cynical instinct was to be irritated by the direct audience address and involvement, but the understated performer soon involved me in his simple but intriguing psychological illusions. Strangely, although the delivery is somewhat stilted, I admired the un-showman-ish qualities of his showmanship. The absence of brash or polished characterisation is in many ways refreshing; it suits the intimate space, and adds to the unusual captivating qualities of the performance.

S1L3NC3’s ability to create suspense is impressive, easily focusing the attention of the audience onto a pulse, or a staple gun, or a giant needle. At this point it seems prudent to mention that whilst we may have previously seen Derren Brown perform similar tricks, S1L3NC3 does not fail to raise an involuntary cringe or gasp at particularly uncomfortable moments.

At points when the show risks becoming overly psychological and pretentious, S1L3NC3 successfully swings back to the modest and mischievous humour that appears to come quite naturally to him. It makes the overall tone of the performance engaging and easy; an entertaining and thought-provoking display of human capability.
Emily Shirtcliff 18 Nov 2009
Review this 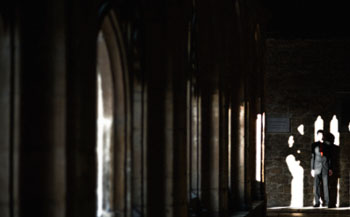