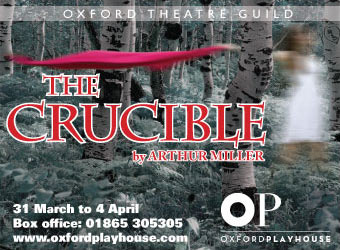 Visit website
Russell George March 31, 2009
Let me start this review by saying that I didn’t read The Crucible at school, unlike half of Oxfordshire’s current adolescents who thronged in their multitudes to see the opening night of the Oxford Theatre Guild’s performance of Arthur Miller’s tale of witchcraft trials in 17th century Massachusetts. Helen, my astute accomplice for this mission, was also coming to the play for the first time; we must have been the only ones in the whole Playhouse. Everyone else was either experimenting with a new hairstyle and badly fitting jeans, or an English teacher. In some cases, both of the above.

But there’s a real joy in watching such a brilliant, important play without a defined cultural awareness that it is both brilliant and important. It’s like eating a Michelin star meal wearing a blindfold. The Crucible is a play that takes you on a dark journey of fear, vengeance and betrayal, but though it’s set in a society very different to our own, the parallels to modern day debates about terrorism are clear enough. There’s not much difference between the people accused of witchcraft in Salem in 1692 and some of those who have been held on terrorism charges by the Bush administration at Guantanamo Bay. The play exposes that universal human frailty: trying to find answers for things we don’t understand, and deciding to blame others, anyone in fact, who conforms to our prejudices.

Yet director Sue Baxter maintains a very definite sense of time and place in this production. There are no clumsy attempt to update the play – the performers are all in period dress - or to refer to it as an allegory of post-war McCarthyism (the play was first performed in 1953, and Miller himself had been brought before McCarthy). But the story is strong enough that we don’t need metaphor or allegory. I was enthralled throughout. The unravelling of different lives within Salem, the petty jealousies and passions which underpin the accusations of witchcraft, are developed so subtly that the play just sweeps you along. The ultimate moral panic seems at once horrific and, within a society where dancing was as a sin and infant mortality an everyday occurrence, somehow understandable.

I also thought the performances by the whole cast were spot on. Alexander Rogers’, playing John Proctor, was excellent, particularly in the final scenes as he struggles with an uncertain conscience. Alice Evans’ Mary Warren was the right side of hysterical, and Andrew Whiffin as Deputy Governor Danforth was unnervingly reasonable in his prosecution of the innocent.

It’s perhaps inevitable that you’ll come away from The Crucible feeling shocked and saddened, but there is also a very real love story that runs throughout the play. John and Elisabeth Proctor’s shifting relationship is just as important. Amidst the gloom and despair of innocent people wrongly condemned, they remain beacons of strength and courage. The Crucible shows that it’s sometimes harder to do the right thing, and it might not make much of a difference, but it’s important to do it nevertheless. This is a fantastic play, and a great production – go see it.

An average to good production with elements of excellence. Some of the cast were wonderful, engaging and well paced (Abigail, Rev Hale, and on most occasions, Proctor), however there was a large amount of wooden acting and a generally poor appreciation of the characters they were playing. Sightlines were a problem leading to overcrowding and important details for supporting actors were missed or overlooked.

On the upside, there were occasional brave choices to have small scenes played out without dialogue often not seen in amateur theatre. Sets were good though Proctor's house was unnecessarily cluttered and detailed in comparison to the other scenes.

The hanging tableau at the end was effective and moving even if the magic was destroyed when curtain call revealed the stage blocks which had aided its creation.