Ben Crocker's update of the traditional fairytale.
Chipping Norton Theatre, Wed November 18th 2009 - Sat January 9th 2010
Phil Bloomfield December 4, 2009
It’s worth taking the trip out to West Oxfordshire to see this delightfully traditional Pantomime. Chippy is particularly good at these shows and this year’s version is again a winner. The story, which is an almost incidental necessity, is about Dick and His Cat, who solve Alderman Fitzwarren’s rat problem in 14th century London.

The Alderman has a shop (cue for a good song about retail therapy) and a lovely daughter Alice. His shop is also home to other important characters: lazy Jack, the town buffoon; Sarah the Cook, the Dame; and lots and lots of rats, who eat steadily through the Alderman’s stock. The rats are led by their King Rat, dressed in black so you know he is the baddie. Enter Dick and His Cat who sort out the rats and get involved in a few more inventive plot devices.

The story sticks roughly to the “turn again, Dick” stuff, with Bow bells and all, for most of the first half, but it then sails off to an exotic Moroccan palace post-interval. The basic elements you would expect are all there: lots of boos and hisses for the King Rat (the excellent Shaun Hennessy), shouts of “he’s behind you”, and communal singing (earliest form of karaoke?), including “my side sings better than yours. Oh, no they don’t”, etc.

The brilliant set design, by William Frickler, makes imaginative use of the small stage with weirdly angled buildings and a splendidly rotating half-ship. It’s worth going just to see that. The cast members are all strong, including the young chorus drafted in from Pippins, but the Cat (Emma Carroll) steals the show, with her mesmerising mime and sexy cat costume. Never mind the Cat getting the cream, the Cat is the cream.

If you go, and I hope you will, then take a child with you if you can. It’s a bit scary at times. One young lad near me burst into tears when the giant rats ran into the auditorium, but happily he was soon smiling again, especially when the free sweets were doled out.
Went to see Dick Whittington on Wednesday in Chippy. it was absolutely FANTASTIC - our girls really enjoyed it too ....
Kristel 18 Dec 2009
Everything you need in a panto and more. (Oh no it wasn't. Oh yes it was!) Singing, dancing, love, jokes, banter, a sing along, a bad guy, a wedding and of course, a happy ending.

A contemporary script with original music, the panto shows the adventures of Dick Whittington, a 'Cotswold lad' seeking to make his fortune with the help of his cat, Tommy. His adventures take him from London to Morocco and back again and he finds love on the way. Yet unknown to Dick and Tommy, the evil King Rat is trying to thwart his plans - while trying take over the world with his ratty friends.

The show is a great night out and was enjoyed by families, school groups and adults alike. The atmosphere was buzzing and excitable and the enthusiastic audience roared with laughter at Sarah the Cook (Ian Blower - the panto dame) and joined in loudly with the sing-along and panto banter. The original songs were lively and fresh, particularly one sung by the cast while on a ship to Morocco – telling us what they'd rather be doing. Dick's was particularly topical, explaining he'd like to go back to London to become an MP, so he could “ fiddle, fiddle, fiddle my expenses!”

The whole cast did a great job – they worked really well together and interacted easily with the audience. Actress Emma Carroll, AKA Tommy the cat was particularly good - her mannerisms and facial expressions were fantastic and instantly recognisable by any cat owner.

The production also made excellent use of the small, but quaint theatre. The sets were simple but effective, portraying London, a ship and Morocco successfully. Particularly good was an 'underwater' scene – after the cast's ship sank. Bubbles floated down into the audience and ushers swished around 'jelly fish', mounted on poles over the audience's head. Fantastic!
Vicky Hancock 9 Dec 2009
We loved this - oh yes we did!

The lovely dimensions of this theatre may let those new to them to be charmed by the intimacy and closeness to the action here - those already 'in-the-know' will be greedy for the more that comes with less.

They also allow a beautiful magic in the second act's underwater world - great and simple stuff. I felt all the surprise and wonder as I did as a child - and has made me feel differently about Christmas this year, so call me Ebeneezer and thanks, Chippy!

The cast include young actors who concentrated very hard on complex lyrics and movement. Up-to-the-minute jokes, slapstick, patter, outrageous costuming and some very sweet tunes from Dick, Idle Jack, Alice, 'Fitzy', Sarah the cook (generously under-played) and a terrifically charismatic cat, Tommy. King Rat as the villain you love to boo and hiss (oh yes, you will) would almost steal the show if it weren't for smaller pesky rats robbing the limelight as well as the cheese!

You will smile: you just can't help it.

The set designs and changes are clever and deft as the characters tramp the highway, crowd a London street, busy themselves in a shop interior, gather dockside, sail the high seas, fetch up and get arrested on a beach and perform in an emperor's palace, with very pretty costumes which glitter and twinkle from the start.

At a time when hearts are underfed and lives are overstuffed, a gift of a theatre trip which is soul-nourishing but takes up no space at all could be just the ticket! Box office: 01608 642350. 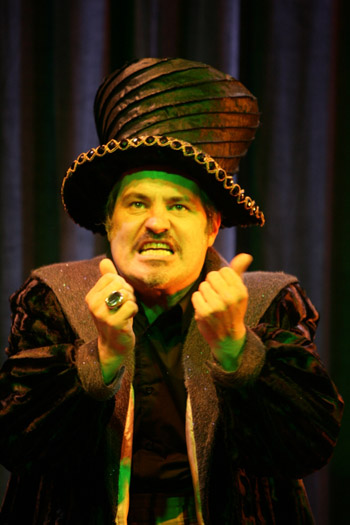