Sing along to Bonzo Dog Doo Dah Band favourites from three of the original lineup.
Cornerstone Arts Centre, Sat December 12th 2009; and Oxford Castle, Fri July 30th 2010
Kathryn August 1, 2010
Three Bonzos and a Piano and the big question was who would be on stage? Certainly not Viv Stanshall who died in a fire so many years ago and the world is a saner but sadder world without him. Neil Innes is no longer part of the team either. Could the band ever be as good as they were? Old hippies in their (late) sixties may not be so appealing to an audience today unless that audience are also a load of old hippies who knew the band in their youth: well, I would say the majority of the audience fitted into that category and those that weren’t looked like their children who had probably been brought up on a diet of Bonzo nonsense.

Three Bonzos: Roger Ruskin Spear, Rodney Slater and Sam Spoons, with David Glasson as the Piano, grey-haired or follicly challenged, rushing around the stage trying to activate home-made electrical gadgets – what was this all about? Nonsense, that’s what, pure unadulterated musical nonsense which had the audience rolling in the aisles and singing along in turn. Anything went and with musical flamboyance. They sang some classics from the old days such as Mr Slater's Parrot, Hunting Tigers out in India, Jollity Farm and a couple of tributes to Viv Stanshall including Canyons of your Mind, sung by Larry wearing the same mask Viv used to wear. Sam Spoons played his spoons with great aplomb and also brought the house down as an Aussie - basing his character largely on Rolf Harris down to the passable on-stage painting.

Joining them on stage as guests were "Legs" Larry Smith and Vernon Dudley Bohay-Knowles, both old Bonzo hands who could also act very foolishly. Larry leading the group in singing The Sound of Music and Vernon playing the saw were highlights. Maybe there was not the mad mayhem, the mindless originality of the sixties line-up but enough of the old to keep the fans happy. New songs have up-to-date themes ranging from Senior Moments to the recycling Bin It and White Van Man. A favourite of mine was Punktuation, literally a diatribe against spelling and punctuation in punk style.

Acoustically the Castle Gardens was not an ideal setting for the Bonzos as their words are so important. There was also absolutely no signage and only those in the know could find their way to the Gardens. Pity - but not the Bonzos’ fault.
The show was a delight. I met people who had travelled from the Netherlands just to be there and an American who had arranged the family holiday to take in the mayhem. The night ended with a standing ovation before the crowd went on their way smiling. Oh and the rain held off too!
Bob Bent 1 Aug 2010
The Three Bonzos And A Piano always put on a great show and the one at Oxford proved highly entertaining. The sense of fun on the stage was duplicated in the audience who were ready to enjoy themselves, which is exactly what they did. A great evening in a great setting.
Doo Dah Diaries 1 Aug 2010
They were innovators of their generation, laughed at and loved in equal measure as they married musical mayhem with comedy and wacky theatrics on stage. The songs and antics of the Bonzo Dog Doo-Dah Band still hold fond memories for so many who fell under their spell in the mid to late 1960s.

While it's no longer possible to reunite the whole team, following the death of the legendary Vivian Stanshall in 1995, three of its key members are flying the flag for all things madcap under the title Three Bonzos and a Piano, and will be performing for the first time at the Cornerstone Arts Centre in Didcot on Saturday 12th December. Original Bonzos Roger Ruskin Spear, Rodney Slater and Sam Spoons have teamed up with super- pianist Dave Glasson to create more fun, music and subversive diversion in the spirit of the ageless band – "a sort of Bash Street Bonzos" according to Roger.

The original band started as an art school group combining elements of music hall, trad jazz, psychedelic rock, and avant-garde art, playing in London pubs and gaining broader public exposure through TV programmes such as Do Not Adjust Your Set which featured Pythons-to-be Michael Palin and Eric Idle and the young David Jason.

"We had a brief illuminating time between about 1964 and 1970 before going our separate ways. Most of us have been doing our own stage acts and shows in the meantime," explains Roger.

The ingredients of Three Bonzos and a Piano had been playing together as a group as the Slightly Dangerous Brothers. Then the idea of a Bonzos' 40th anniversary show came up, and the whole tribe reunited to pay tribute to Vivian, with Bonzo original Neil Innes and some special guests on board – a move that was followed by a tour. Fans were clamouring for more, but Neil wasn't keen to continue. Roger and Sam resumed their own collaboration, then asked Rodney to join them to play some Bonzo tunes. Dave Glasson – ex-Whoopee Band – completed the line-up.

"We decided we couldn't really use the whole band title if Neil wasn't involved, so we had to find a new name," says Roger. Watching The Jonathan Ross Show one night, Roger spied Three Poofs and a Piano, and Three Bonzos and a Piano were born. Roger is in charge of sax, clarinet, trouser press and giant robots (don't ask!), Rodney plays saxophones and washboard, Sam is on drums, electric spoons and didgeridon't, while Dave takes control of piano, bass, pullover and glasses. Andy Roberts, former Liverpool Scene and The Scaffold, who is one of the best respected musicians is a regular guest on guitar, banjo and ukulele.

They have been digging out all the old songs from the Bonzos' back catalogue in honour of Viv, including some that have not previously been performed, as well as brand new songs, but they've avoided Neil's distinctive numbers, which they feel can't be reproduced well without him.

"We are dotted all over the place, so it's tricky getting together and we've decided not to push ourselves to do more than two or three shows a month so we don't get tired or jaded. We're all old people now, you know," says Roger, but it's clear there's life in the old dog yet.

On the setlist will be Jollity Farm, Ali Baba's Camel, Hunting Tigers Out In India, Alley-Oop, Trouser Press, Monster Mash, Tent, Can Blue Men Sing The Whites?, I'm Bored and many more. They are also promising robots, smoke, unsuitable medical technology, ancient theatrical props and the kitchen sink to recreate the atmosphere of those formative years of the Bonzo Dog Doo-Dah Band at such legendary venues as The Tiger's Head in Catford.

"It's general chaos on stage – a bit like a workshop really," says Roger. "We don't want to get too slick with the act, but there little chance of that. We have collective amnesia."
Preview 7 Dec 2009
Review this 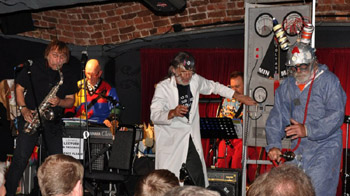