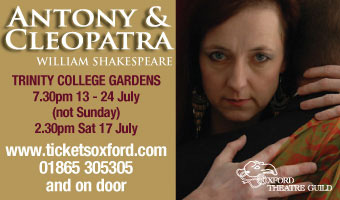 Visit website
Lucy Ayrton July 13, 2010
The Oxford Theatre Guild’s version of Anthony and Cleopatra was a well paced, accessible and charming version of the play. Several cuts have been made from the original, with some subplots removed entirely, but this has been very well done and works to the production’s advantage. The role of soothsayer has been extended, which I also feel was a very good decision. The soothsayer, played brilliantly by Fleur Putt, seems to hover over the play, lending a nicely creepy touch to even seemingly innocuous action.

There was a nice counterpoint throughout of the Egyptian and Roman manners, which was complemented by the decision to change the setting to early 20th century Britain. The military infighting worked especially well in this context, and Craig Finlay’s Caesar was deliciously Cameronian at times, adding an interesting dimension of reflection on Britain’s current political behaviour.

The cast performed with utter conviction and there were some beautiful performances among them, without damaging the power of the ensemble. Colin Burnie was a wonderful Enobarbarus, throbbing with dignity and ultimately incredibly moving. I also especially enjoyed Sinead Carroll as Charmain, who, along with Nell Adams as Iras, provided a strong enough sense of the Egyptian court to balance the larger military element of the play. Their affection for their leader and each other were tenderly played and lovely to watch. I did however feel that Helen Taylor’s Cleopatra could have been a more commanding presence on stage.

While the setting of Trinity Gardens was undeniably beautiful, I would have preferred a simpler set and would wonder if there were more appropriate outdoor settings for the story; the backdrop of trees was very pretty, but as all of the play takes place in various courts, it might have been nice to see it in a courtyard or similar. This is a small point however; it was very pleasant to sit out, and the effect of the sky getting darker, mirroring the fall of Mark Anthony’s fortunes on stage, was lovely. There was apparently an indoor venue available in case of rain, so don’t let this week’s slightly dodgy weather forecast put you off.

Overall, this is a lovely example of outdoor Shakespeare in Oxford.