At one point in their marriage, TS Eliot went mad and promptly certified his wife.
Moser Theatre, Wadham College
Nehaal Bajwa December 10, 2010
The main pull of this play, for me, was the tagline, a quote issued from the formidable Edith Sitwell, poet and one of the couple’s contemporaries: “At some point in their marriage, T.S. Eliot went mad and promptly certified his wife.” Witty and intriguing; a very good call by the production team! But also, it may well be true, at least according to this play. It seems to view the relationship and marriage through this lens, admitting that Viv was difficult for a man of Tom’s temperament and experience to deal with; and yes, illness of any kind puts often unbearable strain on a relationship; but consistently implying that, had the man been thinking straight, he would have seen all these things as trivial and of secondary importance (in the play at least, if not in reality). It’s pretty distressing, therefore, to watch him fail to make that realisation before it’s too late.

This was a tragic play; in the first half we are not quite convinced that the marriage could ever have been seen to be a good idea, and in the second we watch it fade away in a series of unconnected conversations and outbursts in which the couple each seek to get the other’s attention without realising that they already have it. Brian Earp and Helen Taylor carry off these emotional displays with style, and an obvious chemistry. In the very occasional scenes when they are happy, there is a strong impression that if only they could be left to enjoy themselves all the time, their marriage would survive. Earp’s Tom subtly and convincingly matures over the course of the play, from an unsure and slightly whiny, but passionate and bright young intellectual, to a distinguished and controlling gentleman, still unsure about his choices but steelier and more determined to make them. Taylor’s Viv is funny and self-effacing, charming and childish, but capable of encouraging our belief in her sanity despite entreaties by almost every other character to pronounce her mad.

All the cast are talented and adaptable; when the scenes segue from, for instance, a light-hearted and amusing introduction between Tom and his stern, upper-class in-laws, to a breakdown in civility caused by Viv’s erratic behaviour and outbursts, no actor fails to quickly make the transition from (relatively) comfortable to (relatively) terrified. Nick Quartley and Lisa Barnett excel as the likable and loving Mr and Mrs Haigh-Wood; Barnett makes the inherently difficult compromise between a proper, image-conscious, well-to-do lady of high society, and a caring, frightened mother naturally and seamlessly, and Quartley as Mr Haigh-Wood brings notes of uncomplicated humour to an otherwise fairly dark play.  Maurice, Viv’s brother, played by Will Fournier, is crucial to helping us to understand the intentionally ridiculous things she does as comedy, rather than interpreting them as disturbing, as Tom does, as well as nonchalantly delivering some of the play’s best lines.

Tom & Viv runs for two more nights at the Moser Theatre; the characters are polished and interesting, the production understated and relaxed, and you can buy drinks in the interval. As far as I’m concerned, there is every reason to go and see it.
"To her the marriage brought no happiness. To me it brought the state of mind out of which came The Waste Land." - T.S. Eliot in a letter to Ezra Pound.

In yet another excellent production from local company ElevenOne Theatre, Tom & Viv chronicles the downward spiral of T.S. Eliot’s first marriage to the captivating but unstable Vivienne Haigh-Wood.

The play opens in Oxford where the American-born Eliot spent the final year of his studies. The two meet and marry in secret after a tempestuous three-month courtship. The union is doomed to fail, however; Vivienne’s behaviour becomes increasingly volatile and erratic just as Tom disappears into impregnable reserve and the escalating demands of his career.

Vivienne, it turns out, is the victim of a hormonal imbalance which drives her to behavioural extremes, such as carrying a trick knife in her handbag, which scandalise her genteel family and alienate her husband and his Bloomsbury cohort (Virginia Woolf once likened her to a "bag of ferrets”).

The play's dénouement is steeped in pathos, and director Joe Kenneway captures with raw subtlety - and even humour - the last moments of a marriage in freefall.

In all a riveting production that, despite its serious subject matter, will have you glued to your seat.
Sarah Leach 10 Dec 2010
This play is a personal and family tragedy, but shot through with humour. It also provides a fascinating insight into T.S. Eliot (Tom)'s striving to 'become a European' in the class-ridden England of the inter-war years. The captivating duet of the principals, Helen Taylor and Brian Earp, was complemented by a number of strong character actors, bringing this chamber piece to life. For instance, My son was intrigued by the way the actors 'age' on stage during the years the play covers. Despite the sadness of Viv's story, this is a great evening's entertainment.
Matthew Deans 8 Dec 2010
This is a production not to be missed. Elevenonetheatre have a growing reputation for producing high quality shows and this will only serve to augment that reputation. With a fine cast, innovative staging, thoughtful direction and great attention to detail from director Joe Kenneway, Tom & Viv is a powerful and gripping story of a life unravelling, a needless human tragedy made all the more agonizing by the fact that it was entirely preventable, yet maddeningly inevitable because of stiff-upper-lip English coldness and class snobbery.

I will not go into plot details other than to mention that the two protagonists are T.S. Eliot and his wife Vivienne Haigh-Wood and that this is a "critical fiction" which vividly succeeds in breathing life into one of the 20th Century's most fêted literary figures - and presents to the audience human beings rather than a literary "icon" and his muse.

I thought the whole cast were excellent, but must mention in particular strong performances from Nick Quartley and Lisa Barnett as Viv's parents and Donna Doubtfire as Louise. Brian Earp and Helen Taylor as the two leads deserve special credit for their chemistry and brilliantly engaging performances as their characters grow from sparkly youthfulness to weary old age throughout the performance - and for deftly managing not a few costume changes along the way.

A few minor first night lighting and set issues aside, this is first class theatre on our doorstep in Oxford and deserves packed houses - I can thoroughly recommend it!
L. O'Mere 8 Dec 2010
Review this 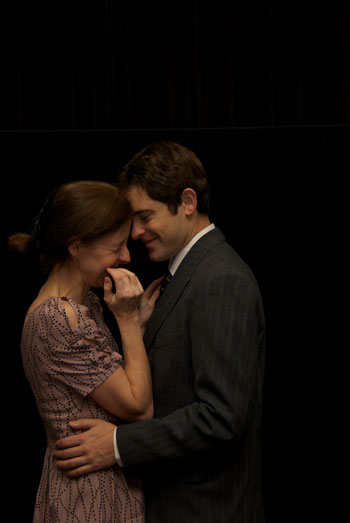