Ali Baba and the Forty Thieves

Panto fun with the penniless woodcutter, the greedy brother, the secret cave and the biggest band of blaggers in all Baghdad.
Chipping Norton Theatre, Mon December 5th 2011 - Sat January 7th 2012
Phil Bloomfield December 14, 2011
If you possibly can, get yourself out to West Oxfordshire to see this wonderfully traditional pantomime. The Chipping Norton Theatre is particularly good at panto, enjoying a national reputation, and this year’s version is another winner, a delight from start to finish.

The storyteller is Scheherazade (Suz Ahmet), who introduces the tale of Ali Baba (Craig Rhys Barlow), a poor Persian boy with a lovely Welsh accent, who wants to marry the slave girl Safiya (Suz Ahmet again). He can’t afford to buy her freedom from his brother Cassim (Sam Kordbacheh) and his evil (boo, hiss) sister-in-law, Sharon (Kali Peacock).  But Ali discovers the way into a secret cave holding the treasure of the equally evil Mustapha Leikh (yes, I know) played with great charm by a Viv Stanshall-imitating Rowan Talbot. You know the cave - “Open Sesame” and all that.  The path to happy-ever-after is strewn with disasters, like when Cassim gets chopped up into little pieces, and all the usual panto stuff, such as the audience-particpatory-singing, shouts of “He’s behind you” and “Oh, yes I do,” a farting camel called Camille, and an outrageous dame - Mum Baba (Shaun Hennessy), with a hideous dress-sense and a comedic timing to be proud of.  We all joined in with child-like enthusiasm, especially the children, and I still think my side of the audience sang the loudest.

There are lots of goodies in the show: the entire auditorium is cleverly decorated to be part of the set, so the support pillars have become palms and there are pots and pans and rugs and swords everywhere. The cast rush about getting everyone to join in: they throw sweets, a particular selling point that pre-dates health and safety regulations; they sing charming songs and crack lots of corny but not smutty jokes, and there are a small number of real children in the cast from Pippins (the young actors' club) who do a confident job.  I particularly enjoyed the scene between Mustapha and two of his thieves, Nossah (multi-talented Kali Peacock, doubling up) and Yessah (gifted comedian Sam Dutton), who did a sort of Abbott and Costello-style “Who’s on first base?” routine.

Ali Baba has an experienced and talented production team in writer Ben Crocker, composer Sarah Travis and director John Terry. The pace of the story is quick and the songs fit particularly well with the action. The one about Mum Baba’s piano is probably their strongest, but they all work really well within the storyline. Do go along and see this excellent show if you can; take a child - preferably one you know - or just be a child yourself for the evening.
Review this 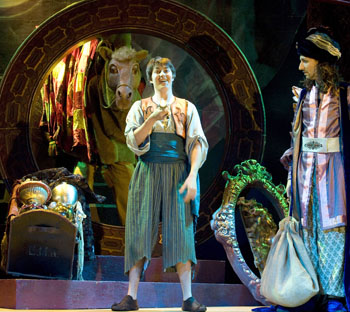