The Merchant Of Venice

Creation Theatre have taken on one of the bard's trickier plays in their latest of a long and highly regarded list of open air Shakespeare productions, and I’m happy to say they’ve worked their magic once again. Also, it would appear Creation had cast a weather spell before the event because, despite the ever looming rainclouds across the Oxford skyscape, the only notable shower of the play’s duration coincided neatly with the interval.

As I understand is often the case with Creation's work, the tone and feel of the play appears to have been dictated as much by their inventive conceptual design and costume as it has by their imaginative reinterpretation of the text: the 1930s costume and spinning set of multipurpose shipping crates perfectly complimenting the production’s various musical interludes.

And on the subject of music, this was by far the most musical rendition of Shakespeare I’ve witnessed. Though the chorus occasionally felt a tad contrived, I felt this lyrical approach added some much needed warmth to the convoluted narrative and provided welcome respite from the play’s occasionally darker themes. I was grateful these more serious elements were played so loudly, too: such huge topics as religion and prejudice are seldom tackled so loudly or unashamedly by modern playwrights, or indeed so ambiguously, and the players were able to convey the uglier aspects of the story with as much passion and vigour as the more comical elements.
The cast were excellent, too. Though there were a few scenes where the actors' delivery seemed slightly laboured, or unsure, all of the players were so busy swapping between roles that their strengths eventually shone through – usually in the play’s more humorous moments. The two standout performances of the night came from Jonathan Oliver, who all but stole the show with his complex, sympathetic portrayal of Shylock, and Leila Crerrar, whose passionate, assured depiction of Portia anchored the story.

Overall, I found this production both entertaining and thought provoking, and though the emphasis on the lyrical qualities of the text initially made it difficult to follow the story, after a short while it served to demonstrate the beauty of Shakespeare’s words. Although some phrases were given a more modern context, Director Natalie Abrahami’s interpretation of Merchant is as faithful and reverent of the original text as one could hope for.

I went to this last night and can heartily recommend it. Lovely setting, very energetic mainly young cast. It's a terribly rascist and anti-semitic play, of course, but a great story and there are some great speeches.

Also fantastic music, movement and costumes in this production. Go if you get a chance! And it continues even if it rains, which takes the worry out of open-air theatre.

Saw this play on Fri 28 July. Sun shone, concrete seat remained cosy and warm all evening without a cushion. The first five minutes were challenging as a police helicopter hovered overhead but then it got going and didn't look back.

So glad that Creation tackled this play, which is so rarely performed nowadays. I had never seen it before and was glad to be able to tick it off the list. Also glad to see such an inspired performance by a very involved cast, who obviously love what they do.

Creation is back on form. Innovative, humorous, compelling...and superbly directed and acted, and with occasional music and song.

This was a novel representation of the play, which kept the essential construct but added some unusual elements. The set worked well - the gondola ride was inspired! I appreciated the crisp diction, which is not always demonstrable in Creation's actors, but which was very necessary as many members of the audience were wrapped in plastic disposable macs which rustled loudly throughout the play. Particularly noteworthy was the sheer joie de vivre of the cast. And it didn't rain! Great stuff.

Creation Theatre's Merchant of Venice was brilliant last night. A very strong cast delivered a powerful and at times humorous production. The revolving stage was inspired, as was the simple but effective set. The acting was excellent and made the play so accessible - I wish I had seen something like this all those years back when I studied this for GCSE!

I have watched many Creation plays and they are always very good, but this ranks among the best. 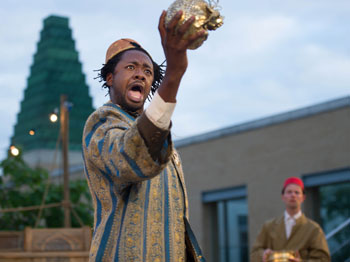 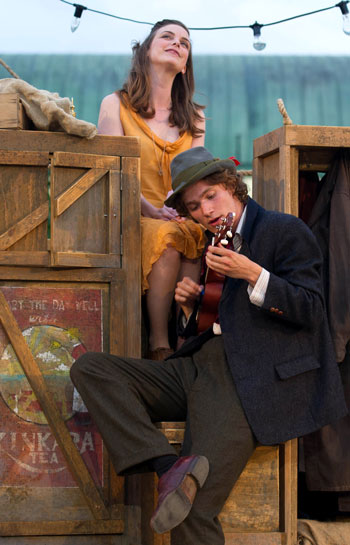