When a lost opera is revived for the stage, and particularly when this is for reasons of topicality as much as musical interest, it sometimes turns out that there were good reasons for its original obscurity. Luckily this fruity slice of Olympic baroque is the real thing: a hidden – if somewhat flawed and gaudy – gem.

As might be expected, L’Olimpiade has been doing the rounds in various truncated forms this summer, but it’s having its first fully staged performance in the magnificent pavilion at the Wormsley Estate which Garsington opera has made its home since 2010.  That staging is made particularly impressive by David Roger’s design, which wittily blends the modern and the genuinely ancient with the idealised classical world imagined by Vivaldi and his Enlightenment contemporaries.

The plot is… well, there’s an awful lot of it*, and it’s bonkers in the way that only opera can be bonkers as identities are switched, flimsy disguises prove bizarrely convincing and long-lost relatives are unveiled at opportune moments. It was a little easier to follow on stage than in the synopsis, thanks to the protagonists explaining everything to each other at length in crisp and occasionally tiresome recitative.

William Berger, as King Clistene’s aide Alcandro, is particularly ill-served in this regard. His relentless exposition is delivered to some of the least interesting music the work had to offer. He, and Rosa Bove’s wobbly, whingeing princess Aristea, are the only weak links in a production stuffed with virtuosity.

Underpinned by a dynamically precise period orchestra, everyone on stage had their chance to shine but particular mention must be made of Michael Maniaci as the tutor Aminta. Despite having a relatively minor role, his jaw-dropping third-act closer, ‘Siam navi all’ode algenti…’  deservedly garnered him one of the biggest curtain calls of the night. The acting wasn’t at all bad as well – despite being rather slight Emily Fons successfully imbued her tragic athlete Megacle with a convincingly masculine physicality, while Ruby Hughes’ spurned Argene went some way to selling her character’s whiplash changes in sentiment as the product of underlying emotional instability.

The whole thing is played, if not (barring a rather cheekily inserted sports montage) for flat-out laughs, then at least with a twinkly-eyed nod to its own camp absurdity. Adding this to the bravura of the music itself turned what could have been a solemn act of musical archaeology into a delightful evening’s entertainment.

So… Licida asks his best mate Megacle (who owes him his life) to pretend to be him in the Olympics so that he can win first prize which is marriage to the local princess – who he loves, but not as much as he once loved Argene who he’s give up on because he thinks she’s run away from him when in fact she was exiled to the forest where she’s now disguised as a shepherdess called Licori – she tried to get the message through, but it never got there because of opera. BUT!! it turns out that the Megacle and the local princess are already in burning-yet-forbidden love (although somehow he only remembered who she was when Licida asks for the favour), so when the princess finds out Megacle’s competing she gets all excited and thinks they’ll finally be together, but Megacle is so overcome with grief and jealousy that he can’t explain the situation coherently before she runs off.

That’s the first three acts. Later there’s suicides, an assassination attempt and two or possibly three executions in the offing until someone turns out to be someone else’s long lost son which is only found out thanks to a) a random piece of jewellery and b) one of the characters suddenly recognising someone who’s been singing at them for the last three hours. 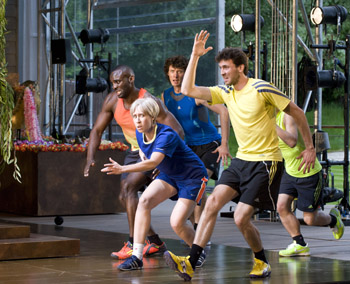 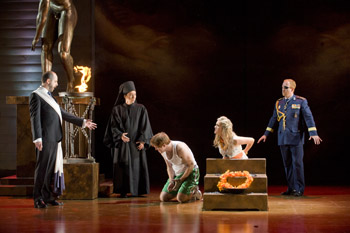