Welsh cakes (Pice ar y maen) might have been around for centuries, but they went positively viral during the 2012 US Presidential election campaign. Mitt Romney's omnipresent wife Ann seemed so proud of her distant Welsh heritage that she would bake fresh batches of the delicious snacks for every group of journalists or voters she met.

Ann's recipes garnered a small backlash - apparently hers were too thick... so here is our tried and tested recipe to enjoy with your leeks and lamb.

Mix the flour, sugar, spice, baking powder, salt, lard and butter in a bowl with your fingers until crumbly. Mix in currants. Mix in the egg and milk until you have soft dough.

Roll out the dough on a floured surface to the thickness of your little finger. Cut out circles using a 6cm cutter. Grease a frying pan with lard, and place over a medium heat. Cook the Welsh cakes for about 3 mins each side, until golden brown, crisp and cooked through. Sprinkle with caster sugar and serve hot.

Best of luck with the baking! Dydd Gŵyl Dewi hapus! 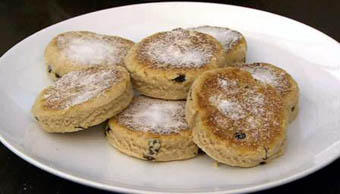