Mozart proves that love is one thing money cannot buy. Sung in German with English supertitles. 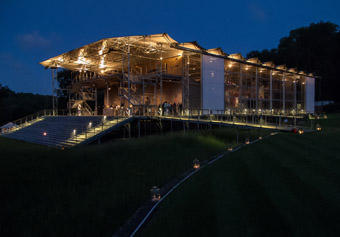 Part of Garsington Opera Summer Season 2013
Enjoy a new selection of operas in the spectacular grounds of the Wormsley estate. This year the choice is Mozart's Die Entführung aus dem Serail, Rossini's Maometto Secondo, and Humperdinck's Hänsel und Gretel. More info
Séamus Gregan June 9, 2013
There comes a point for most Brits, I think, where you realise how life just isn’t enough like James Bond for your liking. Not getting shot at, painful one-liners and mild alcoholism – there’s plenty of all of that going around, but there’s also a nostalgic backdrop of etiquette that no-one bothers with anymore. It’s a world where people dress for dinner, for the theatre or casino; Fleming’s footballers wouldn’t writhe around, diving or biting (though the John Terry saga seems more likely). For a month of sunny June afternoons, a corner of that world is recreated at the Garsington Opera.

I went to Garsington with certain expectations. To be the youngest there by a good 20 years, certainly, and to experience some sort of stuffy ‘meditation on the art form’ that I couldn’t really knock because staying faithful to Mozart is no terrible thing, but a rarefied, inaccessible, unjustifiably expensive ROH in the countryside. I couldn’t have been more wrong. The average age is high, but the demographics were definitely not homogenous, and in terms of lighthearted, inclusive accessibility, you’d have to say it’s a masterpiece. It’s expensive yes (though there are schemes around this), but you can see where every pound has gone and that it has been used well. Garsington is about having a good time, surrounded by beauty – beautiful countryside, beautiful singing, beautiful staging and beautiful clothes.

Daniel Slater’s Die Entführung aus dem Serail treads the line between accessibility and faithfulness beautifully as well. Never did I dream I’d hear ‘bellend’ or ‘knobjockey’ in a Mozart piece, but then again I never thought I’d see Chanel or a Jaguar used as props in the opening act. This romantic comedy has a whiff of the Bard about it, and the way that the dialogue is updated and anglicised, whilst maintaining Mozart’s gorgeous, elongated arias makes you wish you didn’t speak English so that interpreters of Shakespeare might be able to take it further as well.

In Die Entführung best friends Belmonte and Pedrillo try to rescue their lovers Konstanze and Blonde from the wealthy Selim, in whose ‘Seraglio’ they are trapped. In this updated version, Selim is an outlawed Russian billionaire with a football team in the Champions League final, Pedrillo is an English sports journalist and Belmonte an American -  and it just works.

The six main characters are very strong, with leading lady Konstanze (Rebecca Nelsen) and Selim’s menacing, somewhat bumbling and lovelorn bodyguard Osmin (Matthew Rose) standing out musically, whilst Pedrillo (Mark Wilde) has the best of the dialogue and makes good use of it. The masterstrokes though, came from Francis O’Connor, the designer, whose sets got as much mid-performance applause as the arias and delighted from start to finish.

Garsington is about having a good time – a two hour dinner interval where people in black tie picnic with champagne as the sun sets over Wormsley – even if you don’t like Bond, you’ve got to love that.