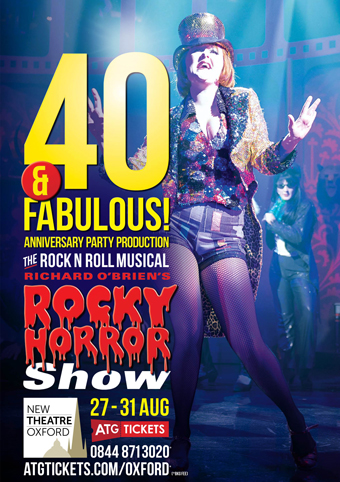 Oh The Horror!... Rocky Horror is a mischievous, mad and timeless party, from the moment the pink mood lighting starts shimmering to the last flourish of an oversized feather boa - and Christopher Luscombe’s production absolutely does it justice.

This 40th anniversary tour has remained true to the classic show in set and costume design. I am told by someone who has seen Rocky in a previous incarnation that the main change was perhaps a greater use of celebratory bright flashes and floodlights, which were effective in covering scene changes when directed into the audience. There was also really excellent sound quality, which was remarked on by the audience in the Q and A with Luscombe following the show. Volume gave power to the rock and roll score but stopped short of obscuring the actors' voices, such that you could follow the words (at least if you were paying attention to them rather than everything else that was going on).

The cast was strong, and that is including the first three rows of the audience who were dressed to kill and knew the traditional heckling script by heart. Luscombe’s velvet clad narrator managed them with a twinkle in his eye and emerged triumphant in his fishnets during the final number. Jayde Westaby’s rendition of Science Fiction was fabulous, and Kristian Lavercombe’s Riff Raff was powerful, piercing and oddly relatable. Special mention must go to Oliver Thornton, partly for keeping a controlled singing voice while doing the splits and partly because I was surprised that an alien transvestite vampire could be so moving. There was genuine sadness in the auditorium when his outrageously loveable Frank got vaporised by the servants. But he was back doing the Time Warp over the curtain call, so we end on a high.

Go and see Rocky Horror – there’s a reason this rock and roll sci fi extravaganza has retained its cult following into its 40th year. If you are possessed of pantomime innocence, you may lose it. If you are shy about heckling, you will learn.  And if you don’t know the moves to the Time Warp when you go in, you will most definitely be dancing it all the way out.