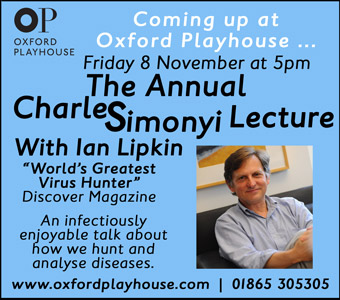 For a small game hunter, W. Ian Lipkin’s sights are set large. Global, in fact.Professor Marcus du Sautoy had to resort to a notebook to introduce Lipkin correctly, his several titles too complicated to remember. However, as the holder of the Simonyi Chair of Public Understanding of Science, du Sautoy has a terrific instinct for an entertaining speaker.

‘I love microbes. They support me’, Professor Lipkin told an audience at Oxford Playhouse on Friday. For a small game hunter, W. Ian Lipkin’s sights are set large. Global, in fact: because Professor Lipkin is an expert on pandemics. Having sequenced a portion of the SARS virus and developed a sensitive assay to detect it, he personally delivered 10,000 test kits to Beijing at the height of the 2003 epidemic. He fell ill himself soon afterwards on his return to New York but recovered, to continue his quest for new infective agents which could once again endanger mankind.

If this sounds like a movie script, the irony is not lost on Lipkin. The actor Elliott Gould played Lipkin in Steven Soderbergh’s 2011 thriller Contagion, which is the most realistic, by Hollywood’s standards, depiction of the threat of a viral pandemic.

Declaring its stars including Gwyneth Paltrow and Jude Law ‘very smart’, Lipkin defends his involvement in such projects as a way of illustrating the importance of vaccination, the reality of pandemic spread and the need for sustained, if not increased funding for scientific research.

As Director of the Center for Infection and Immunity at Columbia University Lipkin (with his research team) is a world leader in infectious diseases.  But even Scientific world leaders have to justify themselves. Without public support and understanding of the science behind successful pandemic containment ‘I would be out of a job,’ Professor Lipkin said. Future funding for ongoing research to try to identify potential harmful pathogens before they cost millions of lives, depends on ‘getting the message out.’ Budget cuts, and counter scientific movements such as Creationism threaten prioritising transmissible diseases.

Globalisation, travel and trade, urbanisation and deforestation all facilitate to some degree the spread of infective agents, such as bacteria and viruses. JFK and Heathrow fly to some 70 airports throughout the world. Most microscopic pathogens could be transported anywhere on the globe in less than 14 hours, so research, and therefore, readiness is all.

Sometimes it is human decision-making, not funding or lack of knowledge which gets in the way of progress.

Polio was effectively tackled in the USA following President FD Roosevelt’s March of Dimes in the 1950s. In 1988 the UN called for global polio eradication by 2000. ‘It was ambitious but not impossible,’ Professor Lipkin said. ‘What stood between us and success was among others, political strife.’

When a polio vaccination programme was rolled out in Pakistan, the CIA used the swabs obtained from Osama Bin Laden’s children to verify with a high degree of certainty that he was the man living behind the high walls of the compound under covert CIA surveillance.

Subsequent attempts to vaccinate the Pakistan population have met with resistance in some areas. Similarly, Syria has seen the emergence of polio, and an effective vaccination programme has been interrupted by civil war. ‘We could, should and must eradicate polio – yet it is humans who put us at risk’, Professor Lipkin said.

And it’s not just Polio. After the Haiti earthquake, the island was ravaged by cholera. The bacillus was an Asian strain. It was eventually traced to Nepalese peace keepers who had not been screened before entry.

Smallpox has killed 300-500 million people; HIV 25 million worldwide. In I918, between 75-200 million people lost their lives to influenza. It is a return of the latter which poses one of the most likely threats in the 21st century.

Exposure to viruses may not always kill, but Professor Lipkin believes they may have a profound effect on future ill health. Early exposure to influenza in pregnancy may be linked to future mental illness in the foetus.

And if these statistics weren’t already scary enough? ‘There are at least 320,000 new viruses yet to be discovered,’ Professor Lipkin said.