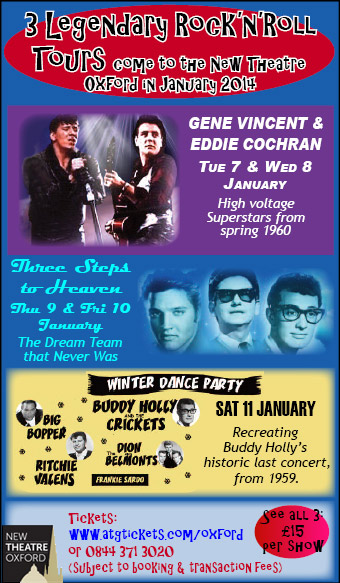 This was a night of nostalgia at the New Theatre, as a talented group of musicians recreated the teenage hits of the late ‘50s and had the audience dancing in the aisles. The Winter Dance Party, which gives this evening of musical entertainment its name, was the tour headlined by Buddy Holly that set off to entertain America’s Midwest in January 1959. Supporting acts included the Big Bopper, Dion and the Belmonts and Ritchie Valens.

We were treated to live numbers, invited to sing and clap along, and by the end a good chunk of the audience just couldn’t help themselves and were bopping in the aisles.  Clearly some members of the audience were reliving their youth. It is surprising how popular those hits still are today: you may not be able to name the artist but I bet you can sing along to Chantilly Lace, Teenager in Love and That’ll be the Day, and have danced to La Bamba at one point in your life.

In the first half the individual ‘stars’ did a turn, and they all then came together in the second half to support the headline act – Buddy Holly (Ed Handoll). All the performers were musically talented but I should make special mention of Matt Blaker (backing singer/saxophonist) and Will Tierny (a Belmont/guitarist) for their animated performances. Handoll, though, was the stand-out star of the night. Dan Plummer, making an acting debut as Dion, certainly had the voice but needs to develop stage confidence to go with it.

The support band of four was tight and laid a great foundation of driving rhythm and supporting instrumentals to the leads. Perhaps the dance moves weren’t as synchronised or as flamboyant as the originals but musically this was spot on.

The problem with this show is how to categorise it. It is neither a tribute act like Bjorn Again or Bootleg Beatles, nor a musical like Dreamboats and Petticoats. It isn’t a gig either, as the performers don’t interact with the audience. The pretence is that the audience is in the Surf Ballroom, Clear Lake, Iowa, and this is Buddy’s last gig. All the dialogue is scripted (and rather stilted) and the reference to the following morning’s plane flight, in which Holly, Valens and the Big Bopper were killed, frankly tacky. The dramatized ending is misjudged too – it means that, after all the fun, the end of the show is really down-beat and the audience is given no chance to genuinely applaud all the performers.

Putting that aside, it is a fun night out, especially for an ardent rock and roll fan. All these acts were fine proponents of the three minute single and, after hearing hit after hit, we left the theatre with feet still tapping.

The premise of this production is that, if it wasn’t for a fateful night in 1959 when a doomed aircraft robbed the world of Buddy Holly at the age of just 22, one day we could have seen a gig featuring Buddy, Elvis Presley and Roy Orbison. To be honest, this is a bit of a far-fetched idea – the other two shows in the trilogy were ACTUAL gigs (the Winter Dance Party in 1959, and the 1960 Cochrane/Vincent gig), but this one was just a wish-list line up of rock and roll superstars who died 30 years apart.

The show starts with a set from Elvis Presley (Stephen Michael Kabakos) circa 1959, showcasing some of his early hits and introducing us to that hip-swivelling which was, back in the day, so shocking it was censored and Elvis could only be shown on TV from the waist up (yes, really!).

We then see Buddy Holly (Ed Handoll) without the Crickets, before the ‘Third Step’ Roy Orbison (Damien Edwards). Up until Edwards took to the stage as ‘The Big O’, it was a run of the mill tribute show with little backstory given to link the three singers. Kabakos is excellent as Presley – he has the looks, the lip curl, the hip movements and of course the voice – but his first set featured older and some lesser known hits. It was a good opening set, but it wasn’t until Edwards took to the stage as Roy Orbison that the magic really started.

Edwards’ voice is uncannily like Orbison’s – that velvety rich tone that is still so unique – and I was able to close my eyes and imagine I really was listening to a true star from yesteryear.

The second half started with Orbison’s set, and was so beautifully performed that I wished I could just listen to a whole show by Edwards as Orbison – it was easy to get lost in his mesmerising performance, particularly on ‘A Love So Beautiful’ and the spectacular ‘I Drove All Night’.

Buddy Holly’s second set was up next, and although Handoll performed well and delivered songs including ‘Peggy Sue’ and ‘Oh Boy’, he was the least convincing of the three performers – he was entertaining, but quite forgettable, although he did look like the only one of the three ‘stars’ who was actually playing his guitar.

I was completely sold on Orbison’s second half set and didn’t think it could be topped, but then came Elvis. Vegas Elvis. White jumpsuit with rhinestones Elvis. As a child of the 80’s, one of my favourite songs was 'Suspicious Minds' – by, of course, Fine Young Cannibals. It wasn’t until I saw the extended 12-minute recording of Elvis’ performance of 'Suspicious Minds' at his comeback tour in Vegas that my mind was blown and (as much as I still love FYC’s version), this was such an incredible performance that, if I could time-travel, as well as seeing what the lottery numbers for next week are, this is the number one gig I would wish to be at. And thanks to Kabakos’ performance, I got the closest I probably ever will. He had it all – the jumpsuit, the voice, the passion, the moves, the charisma – and we were all willing him to keep his jumpsuit intact when he joked ‘I’m caught in a trap, I can’t get up…’ during a particularly ambitious move.

We then had a mini-concert featuring all three stars, with the (surprisingly sparse) audience getting to their feet for ‘Pretty Woman’ and a few catchier numbers to end the gig – but then the concert ended rather strangely, with the three singers just casually saying goodnight to the audience, no curtain call, before Edwards asked if we wanted one more and brought on Eddie Cochrane (Dan Plummer) to join in with an acapella version of 'Three Steps to Heaven'.

But I digress…back to tonight: in summary, a good night of tribute acts to three rock and roll superstars of yesteryear. Kabakos is definitely worth seeking out for his Elvis portrayal, but the true star for me was Edwards with his uncanny voice likeness to Roy Orbison, which was mesmerising, captivating, and worth the ticket price alone.