A little-told story of troops performing theatre at the battle front during the Great War, performed by Mikron Theatre, who travel around by canal boat.
Sadler Building, Tue 5 August 2014
Helen Ward August 6, 2014
Troupers

Entertaining frontline troops in wartime is a familiar concept, but as the audience at Oxford Science Park's Sadler Building discovered last night, it only dates back to 1915. Troupers is based on the story of Lena Ashwell (1872-1957), a formidable actor-manager with a passion for bringing theatre to ordinary people, who organised the first concert parties to entertain soldiers in France during the First World War.

Troupers begins with Ashwell trying to sell her idea to a sceptical War Office which is only won over when they learn about the scheme’s influential royal backers. The rest of the first half is dedicated to Ashwell’s trawl through the world of London’s music halls to gather “turns” for her first concert party.

Then it’s off to France, with a glimpse of the grotesque living conditions and a reminder that a soldier’s life was often one of drudgery and boredom. Music hall style shows in overcrowded YMCA huts are enthusiastically received, earning the players the soubriquet “angels of happiness”. Soon they start to push geographical and artistic boundaries by visiting hospitals and, ultimately, the front line whilst extending their repertoire to include Shakespeare at his darkest and most brooding.

In many ways, this is an ideal subject for Mikron, who travel by canal barge bringing theatre to ordinary people in pub gardens and other non-conventional settings. Having seen several Mikron productions, I’m now a firm fan, but on this occasion they didn’t quite pull it off.

Mikron are a talented company – Jill Myers as Lena Ashwell, John Holt-Roberts as stand-up comedian Uncle Gervaise, Esther-Grace Button as singer-commedienne Bessie Fountain (“the girl next-door but-one”) and Nicholas Coute-Langmead as Jamie, a wounded soldier and singer of “quality songs” all put in fine performances, but are let down by an uncertain structure and artistic vision. Although it avoided being a pint-sized Oh What a Lovely War, too much of the evening felt like The Good Old Days meets The Good Companions and lacked focus. The writers and production team might have done worse than take a leaf out of Lena Ashwell’s book, shifted more of the action to France and risked challenging their audiences with something more serious and thought provoking.

Mikron are touring Oxfordshire until 19th August 2014 with Troupers and Till the Cows Come Home ( a homage to ice cream and slow food!) www.mikron.org.uk/. 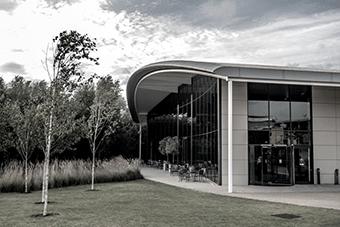