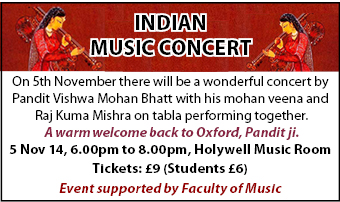 It’s not often you get to hear a musician who plays an instrument they’ve made themselves. So when I learned that Indian classical music maestro Pandit Vishwa Mohan Bhatt was coming to town, well, let’s just say all Bonfire Night plans were promptly cancelled.

Pt. Bhatt has invented the Mohan Veena. Named after himself, it is an ‘Indianised adaptation of the Hawaiian guitar’ – a kind of hybrid slide guitar, with 14 extra strings, which allows it to sound like a sitar, sarod or veena . Or indeed - as he demonstrated tonight - like a peacock from the mountains of India. All of which, to me, highlights a hitherto under-recognised dynamism bringing millennia-old traditions to the 21st century.

Following in the footsteps of his late guru, Pt. Ravi Shankar, Bhattji has widened the reach of Indian classical music. For example, he has embraced fusion collaborations with – among others - Western and Chinese artists, and has even won a Grammy, for “A Meeting by the River” with American guitarist Ry Cooder. For this reason, and also like his guru, he may polarise the purists. Yet it does not feel like this artist’s integrity has been compromised in the process of outreach: his influence is not only geographical, but also generational. For the last 37 years Bhattji has been involvedin the voluntary SPIC MACAY programme, which promotes Indian classical music to young people.

Furthermore, tonight’s performance, accompanied by Pandit Raj Kumar Mishra on the tabla, was pure classical, demonstrating both technical virtuosity and warmth of expression. Not only did the performers capture the mood of the evening, but they also recast it, gifting it back to the audience with the lightest, most delicate touch. I only wonder if turning off the microphones might have further brought out this ethereal quality, as the acoustics in the music room really are very good.

There was also a Q+A, plus an articulate explanation of some of the elements of the recital, which was a thoughtful and considerate addition for those people unfamiliar with Indian classical music. If I could change anything about the repertoire, it would have been to add some Rajasthani folk music. Bhattji is from Rajasthan, Northwest India, which has a colourful musical tradition (one of my favourites). It would have been wonderful to hear this on the Mohan Veena but, of course, time constraints must be observed and there were already plenty of treats on offer.

In short: tonight the veena sparkled, the tabla illuminated, the audience glowed, and Britain’s oldest concert hall created its own fireworks from the magical music of India. Hats off to the Oxford India Society for organising such a fab event - I hope there will be many more to come.