To Have and Have Not

Bogart and Bacall.
1 review
Ernest Hemingway's To Have and Have Not is dirty, aggressive, steamy and tragic. The Howard Hawks film steams quite a lot, but that's about where the resemblance ends. The plot becomes essentially a remake of Casablanca (Humphrey Bogart had just had a huge hit in that) but with the devastatingly sultry 19-year-old Lauren Bacall as the love interest instead of Bergman. Bogart's best mate, the drunken washed up sailor Eddie (Walter Brennan plays him beautifully poised between tragedy and comedy), is a character from the book, but Bogart is basically the wise-cracking tough nut with a heart of gold (it is after all what he does best). This is a considerable over-simplification of the book's hero, who's a bit more of a Graham Greene-style moral mixup. And is happily married to someone about as unlike Lauren Bacall as you can get.

The first of four Bogart-Bacall films, it's also possibly the best. Bacall was a model discovered by Howard Hawks, and she and Bogart began a passionate off-screen affair that ended in a magnetic marriage. You can tell. The screen sizzles, and Bacall has an extraordinary wit and charisma - especially given her lack of experience at the time. Apparently her "look" (a jaguar-stare up from under lowered eyebrows) originated from her attempts to keep her chin steady when she was trembling from nervousness in her début scene.

Bacall didn't make very many films, and arguably none as good as this - the script zings and the plot is suspenseful if a trifle inevitable. You should go and see it if you like witty film noir or if you have any interest in seeing the birth of one of the most unusual and stylish film stars of the century.
LovePuppet 9 Nov 2007
Review this film 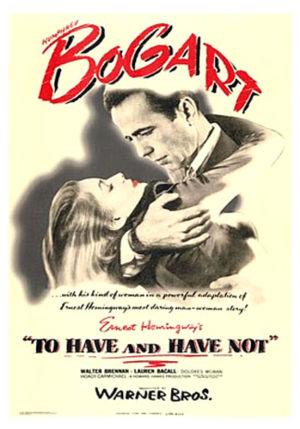