6 actors portray aspects of Bob Dylan.
2 reviews
Miranda Rose January 21, 2008
This is a startlingly good film. Quirky and serenely surreal, it's an impressionistic poem rather than any kind of straight story. I think this is an ideal treatment for the biopic of such a notoriously elusive artist. Dylan's name isn't mentioned once: sometimes he's supposed to be an actor, sometimes a singer, sometimes an outlaw-hermit in a weird Western allegorical fantasy world. Only Cate Blanchett of all the six actors looks anything like him, and the plot maps only vaguely on to what we know of his real life, anchored by two or three key events (his conversion, his divorce and the bike accident).

Cate Blanchett's Don't Look Back-era Dylan (they actually partially-recreate some of the scenes from that '60s documentary) weaves through the film, holding the rest of the characterisations and stories together - she's the only one to attempt any kind of straightforward physical impersonation. And it's a stunning impersonation. She deserves at least an Oscar nomination for it. She's got the edginess, the charisma, the desperation and actually makes her face change to look like his. One of my companions, a Dylan fan who'd somehow managed not to hear about her role, never realised who it was.

The black child actor Marcus Carl Franklin was also extraordinary as the young train-hopping Dylan: an incredible voice and presence - I think we'll be seeing a lot of him in future. Ben Whishaw as the sad cynical young poet was very compelling, and spot-on for his role of occasional commentator; Richard Gere was a very cuddly outlaw-hero and Bruce Greenwood was eerily good as the critic/manager targeted in the song "Mr Jones".

I was less impressed by Heath Ledger as the lover/husband aspect of Dylan (he could have been anyone in any romantic melodrama, I thought); and Christian Bale, brought on whenever the earnest side came out (early protest songs, later Christian whinges), was frankly tedious but mercifully brief. I suppose someone's got to do it.

The pacing was splendid: it was never boring, but there was lots of visual space (trees, lights, wide open train-landscapes) in which to process things, more like a continental film than standard Hollywood. The sinister backdrop of '60s politics, Vietnam etc, was beautifully understated, too: menacing and real, it peeked out through news broadcasts and papers, providing context without wrenching away the story.

I have quite a literal mind and was prepared to be frustrated at the lack of reality, coherence etc, but I was rapidly convinced that this is a really clever way to make something interesting about someone extraordinarily famous. Otherwise it could have been merely a reiteration of facts everyone knows already, or, if they'd made a straight film with even the incomparable Blanchett as the only actor, it couldn't have been much more than an exercise in spotting the difference between the present actor and the past reality.

I went with two normal people and three rabid Dylan fans, and we all loved it (with some reservations on the part of the Dyan extremist, but even he was quite pleased by the choice of track right at the end). If you can't stand Dylan's voice (it's an acquired taste), then pull yourself together and get out of the kitchen. If you're at all favourably disposed towards his stuff, then this is an unmissable film.
Kevin Money January 14, 2008
On a film course I attended recently, I discovered that if a film doesn't have a conventional plot, but is held together by a central theme, idea, or, as in the case of I'm Not There, subject, then you call it an associational film. You don't get many of them out of Hollywood these days. To be really honest, there were times watching this film when I began to understand why.

The subject of I'm Not There is Bob Dylan. 6 actors play characters that represent different aspects of the singer, though none of these characters is called Bob Dylan. The director, Todd Haynes, doesn't feel obliged to give equal weight to the different Dylan avatars. Marcus Carl Franklin, playing 'Woody Guthrie', drifts out of the film early on, and we barely meet Richard Gere as 'Billy the Kid', until the film is about an hour old. The film's central performance is from Cate Blanchett playing the mid-sixties Dylan, who goes to London with his new electric band, to be greeted by endless question from snooty culture vultures, and calls of 'Judas' from his fans. It is Cate Blanchett who, in comparison to the five other male actors, looks and sounds most like Bob Dylan.

Todd Haynes deliberately emphasises the importance of this turning point in Dylan's career. From this point on, Dylan was always an enigma, it was always difficult to put your finger on where he was coming from and what he was trying to say. This moment justifies the splintered narrative of I'm Not There.

If you like and know a bit about Bob Dylan, you'll probably understand much of what the film is trying to get at in its different sections. You'll get that Christian Bale is representing the sappy side of Dylan who would become a born again Christian and write not-so-great albums like 'Blood on the Tracks'. You'll also get that Charlotte Gainsbourg's character is supposed to be Sara Dylan, the wife that Heath Ledger's misogynistic film-star cruelly betrays. But I doubt you'll understand all of the script, which is frequently as bonkers as a set of sleevenotes from one of Dylan's albums.

This all works really well in the film's wacky internal logic, but you can't help feeling that the director should perhaps have stepped back from his subject a little. The film seems to lack a sense of historical or cultural perspective. The moment that Dylan went electric doesn't really have the earth-shattering significance in 2008 as it may have done for a folk music fan in 1965.

You have to admire Todd Haynes for making a film that really tries to deal with Dylan as an artist. But surely the film should also try to explain why the artist deserves such slavish attention. Watching I'm Not There, I often felt sympathy for how any non-Dylan devotees in the audience must be feeling – unengaged and rather annoyed.
Review this film 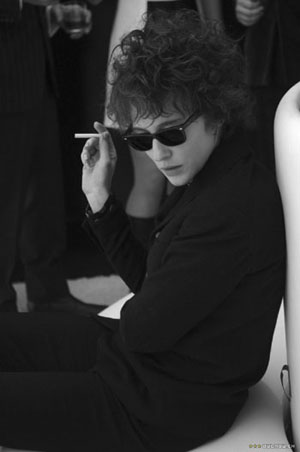