Humphrey Bogart and Ingrid Bergman attempt to amount to a hill of beans in a crazy world.
1 review
Runtime: 102 mins 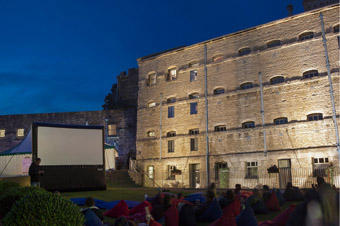 Part of Cult Screens Oxford - 2016
Once again, this Summer Oxonians can enjoy 2k HD projection of cult and classic films at four location in Oxford: the Old Prison Exercise Yard, St Hugh's College and the Pitt Rivers. Relax in bean bags with blankets, and enjoy drinks and popcorn! More info

Dan Hall May 30, 2016
A timeless film shown in a gorgeous spot made for a properly indulgent evening

Cult Screens marries the marvels of Hollywood with the beauty of Oxford's older spaces, taking its peripatetic silver screen to some of the city's most spectacular spots: this year at Oxford Castle, the Pitt Rivers Museum, and St. Hugh's College. Casablanca at Oxford Castle sounded too good to miss to me, so I jumped at the opportunity. It's a timeless film shown in a gorgeous spot which – as you might imagine – made for a properly indulgent evening.


Everything has been said about Casablanca, but not everyone has said it yet. So here's my critically inevitable view: it's undoubtedly one of the greatest films ever made and you absolutely have to watch it at some point or another, being one of those movies that's not so much recommended as given. I'd seen it maybe five times before the Cult Screens showing at the Castle, but this occasion will definitely be the one that comes to mind when I think of Casablanca for the rest of my days. The screen was nestled well within the castle's ancient walls which is surely one of the few settings commensurately spectacular with the film. I am envious of you if you were there having the amazing experience of Casablanca for the very first time in such lavish circumstances, like I would be if the first kiss you'd ever had was actually with Ingrid Bergman in Paris. Sickeningly romantic.

There are of course practical considerations you need to think about when you're going to an outdoor film screening. You're at the mercy of the elements for two and a half hours from 9pm onwards, which even at the height of the Great British Summer is a chilly (and potentially soggy) proposition. Your £16 ticket will get you a deck chair/bean bag, and then there's an extra charge for a blanket to thinly stave off certain hypothermia, so you should ensure that you are going with one of your consummately close friends for cuddling purposes or alternatively put on several of your insulating cat jumpers that have alienated you from all of your close friends. There is a bar where you can get hot drinks or something stronger to warm you up, but be advised that the prices were set in proportion to the fact that the Castle's film goers were very much a captive audience.

This is ultimately a novelty – it doesn't really matter where you see any of Cult Screens' eclectic selection of classic films; you're going to enjoy yourself. But as far as novelties go, I think the Cult Screens' showings are really more 'experiences', and they are certainly experiences worth having.