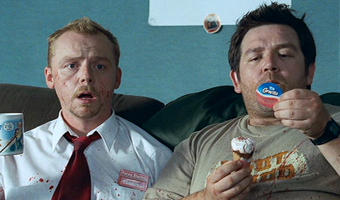 Part of The Cornetto Trilogy [15]
Genre parody masterpieces from director Edgar Wright with Simon Pegg and Nick Frost. Shaun of the Dead (2004), Hot Fuzz (2007) and The World's End (2013). More info

"To err is human" says Simon Pegg and perhaps the same could be said of the 3rd of Edgar Wrights trilogy.

It has its laugh-out-loud-moments all mainly in the first 20mins, then, despite the fact that the film has some of the UK's funniest actors, it doesn't really go anywhere. The script lacks the depth of surreal comedy and great one liners of Shaun of the Dead and lacks the charm and togetherness of the hilarious Hot Fuzz.

Hardly a classic, but worth a giggle when compared to the total garbage we've been subjected to in our cinemas so far in 2013.